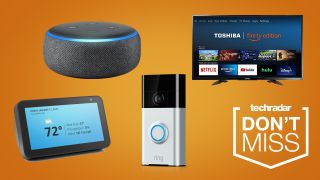 While the Amazon Prime Day sale officially starts tomorrow, October 13, the online retailer has jumped the gun with fantastic deals that you can shop right now.

These early Prime Day deals include record-low prices on Amazon’s best-selling devices. Some of the best offers we’ve spotted include the Echo Dot 3rd gen marked down to an all-time low price of $18.99, the Fire HD 10 tablet nearly half-off at $79.99, and a Toshiba 50-inch 4K Fire TV on sale for just $259.99 (was $379.99). You’ll also find Prime Day bundle deals like the popular Ring Doorbell that includes a free Echo dot for just $69.99.

See more of the best early Prime Day deals below, and keep in mind, you’ll need to be an Amazon Prime member to take advantage of these stellar deals. You can sign up for a free trial below, which will see you through Prime Day and which you can cancel after 30 days.

Echo Dot (3rd gen) with Alexa: $49.99 $18.99 at Amazon
Want a voice assistant-enabled smart speaker for less? Save more than half off the retail price of the Echo Dot 3, and stream music from a range of music services. The discount comes just as Amazon is preparing to launch a new generation model of the Echo Dot. View Deal

Amazon Echo Show 5: $44.99 at Amazon
For a limited time, you can get the Amazon Echo Show 5 on sale for a record-low price of $44.99. The 5-inch smart home display works with Amazon Alexa and allows you to connect with family and friends from around the world.
View Deal

Amazon Fire HD 10: $79.99 at Amazon
Amazon’s Fire HD 10 is just a touch off being half price for Prime Day this year, and you’re able to pick up this 10.1-inch screen tablet in four different colors right now. If you’re after a cheap tablet, this may be right for you.
View Deal

Insignia 43-inch 4K smart TV: $199.99 at Amazon
This is one of the larger discounts available, with $100 off the RRP for this 43-inch 4K TV. Also comes with the Fire TV OS and Alexa voice remote.View Deal

Toshiba 55-inch 4K Ultra HD Smart Fire TV: $259.99 at Amazon
A fantastic price for a mid-size 4K TV, Amazon has the Toshiba 50-inch Fire TV on sale for $259.99 for Prime members. The smart TV has the Fire TV experience built in which allows you to seamlessly stream your favorite movies and TV shows from the home screen of your TV.
View Deal

Looking for more Amazon device deals? You’ll find all the lowest prices from around the web right here, with offers available in your region.

TechRadar is rounding up all the top deals over the Prime Day sales period, and we’ve put all the best Prime Day deals in an easy-to-navigate article to help you find the bargains you’re looking for.