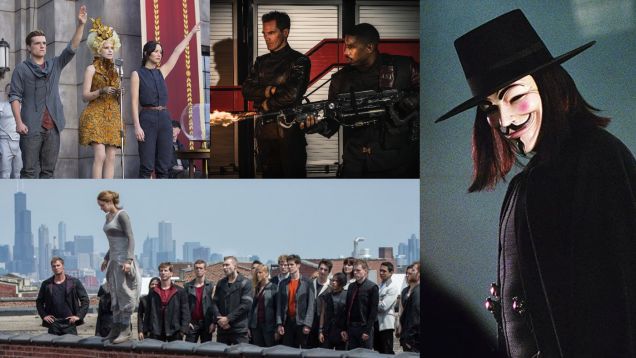 There are times when everything sucks and you just want to rage against the machine—sometimes literally, as is the case with one of the movies on this list we’ve compiled. Check out some of our favorite films to watch when you’re craving a good old fashioned revolution against a tyrannical system that exploits the lower classes in service of themselves. No relation.

Who would’ve thought a society that forces almost every region to surrender two of its children for televised murder couldn’t last? Hunger Games survivors Katniss (Jennifer Lawrence) and Peeta (Josh Hutcherson) help lead an uprising against the Capitol and the evil President Snow—who’s oddly getting a prequel story that’s already been picked up for a movie. Sure, let’s humanize the mass murderer. Why not. The important thing to remember is, he lost.

Remember, remember the fifth of November. This comic book adaptation from the Wachowskis takes place in a totalitarian theocracy where so-called morality is used as a cover for persecution and genocide. Evey (Natalie Portman) joins forces with the mysterious “V” (Hugo Weaving) to bring it all crashing down. His methods may be controversial—to say the least—but they definitely get the job done.

Rise of the Planet of the Apes

It’s not always humans who lead the insurgence. The latest journey into the Planet of the Apes franchise started with Rise of the Planet of the Apes, the story of Caesar (Andy Serkis) and his fellow apes gaining human-like intelligence, which leads to a rebellion against the humans who’re mistreating them. It set in motion the titular rise as told through the apes’ point of view. It made you understand their side of the story and kind of root for the destruction of humanity.

Greatness can come from anywhere. That was the message of Star Wars: The Last Jedi. The Resistance was on its last legs and it seemed like nobody was coming to their aid. That’s because the galaxy was gripped by fear, and didn’t know if they had the strength to fight back against the First Order and Kylo Ren. But then they rose up, fighting hate with love and everything else they had left. This movie showed that you didn’t need a family dynasty or grand prophecy to stand up against tyranny. Anyone can become a hero.

Look, I didn’t say they all had to be good. The Divergent trilogy is about a young woman named Tris Prior (Shailene Woodley), who grew up in a futuristic but dystopian version of Chicago where every person is divided into one of five factions. Tris discovers that she is a Divergent, meaning she’s a little bit of everything and cannot be controlled by the government. She takes it upon herself to help wake the people up to the dangers of a faction-filled world. Also, there’s the fact that their whole society is a scientific experiment, but let’s not get into that right now.

He died so that we may live without being ruled by aliens wearing human faces. They Live is about a drifter (Roddy Piper; his character’s never named, but the credits call him “Nada”) who discovers that Earth is being controlled by aliens who have filled the world with subliminal propaganda to keep the masses complacent. Nada joins an anti-alien movement that seeks to expose their extraterrestrial overlords, eventually sacrificing his life to destroy the transmitter and show humanity the truth. Thank you, Nada.

The 2018 HBO adaptation may have not been the best version, but Fahrenheit 451 is a great example of seeing how a revolution begins. It takes place in a future ruled by a theocracy where reading has been banned, with “firemen” like Guy Montag (Michael B. Jordan) responsible for burning all contraband literature. However, thanks to a few secret readers, Guy learns the beauty and value of books and starts his own secret collection. It’s all about how a spark can ignite a wildfire of revolution. You’ll just have to look past the DNA birds.

Of course I was going to mention the Hood, the greatest revolutionary leader of all time. This bizarre adaptation of Robin Hood turned Robin of Loxley and his followers into Medieval Antifa, rising up against the tyrannical Sheriff of Nottingham to free the people from, well, I guess it was the religious oligarchy? The movie was kind of all over the place. If you’re looking for style over substance—I mean a lot of style, and it’s weird style—this one has all the trappings of a revolution with none of the purpose or value.