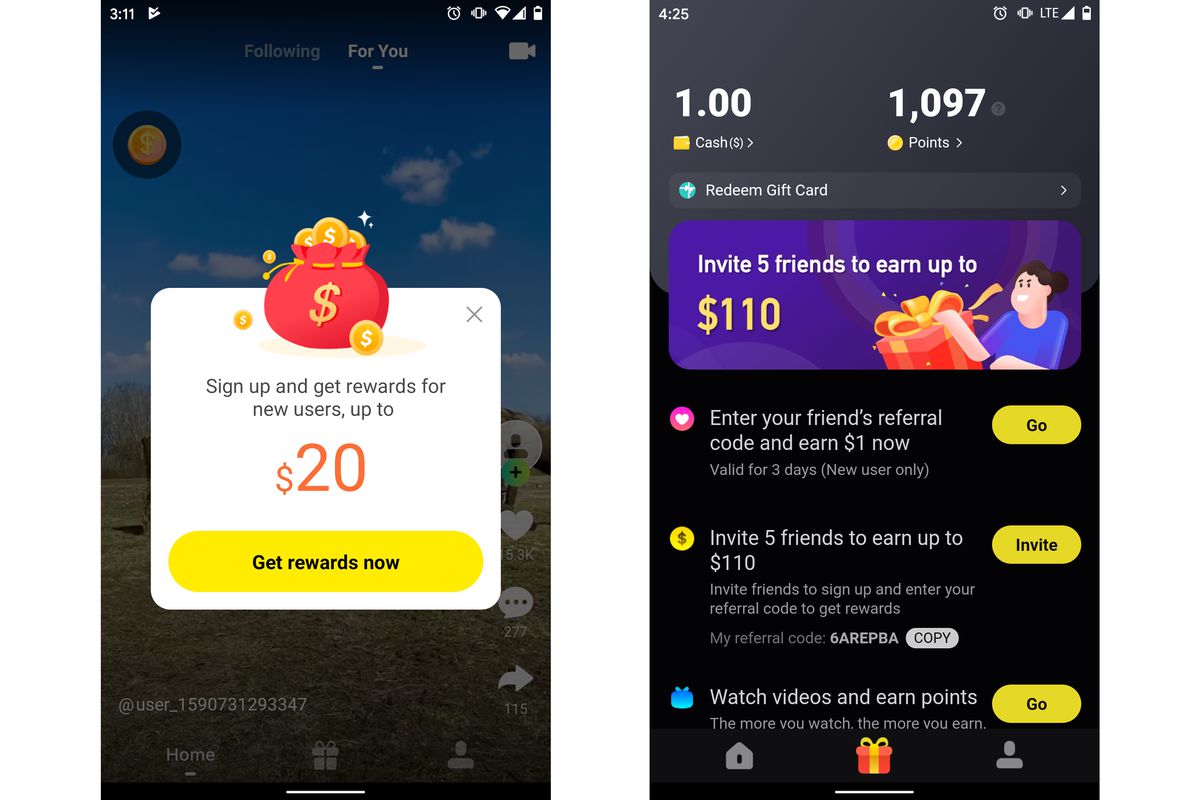 TikTok has a new competitor: Zynn, a nearly button-for-button clone of TikTok that differentiates itself with one key twist — it pays users to sign up, watch videos, and convince others to follow suit. The app launched at the beginning of May, and as Mashable noticed, it’s now the number one free app in Apple’s App Store and in the top 10 on Google’s Play Store, too.

Zynn is fully a TikTok clone. The core interface is identical, and both are oriented around watching short portrait-orientation videos. The big distinction is a countdown timer with a dollar sign in the middle that hovers over every video on Zynn. As you watch videos, the timer fills up and gives you points, which you’re supposed to be able to redeem later as cash or gift cards. I haven’t tested to see if this works, but a couple of people have posted YouTube videos showing payment receipts.

The app didn’t exactly come out of nowhere, despite what it seems. As The Information reported yesterday, Zynn is the extension of a rivalry over video apps in China. Zynn’s creator, Kuaishou, is a well-funded startup that runs one of the biggest video apps in the country. The app is second only to Douyin, the Chinese version of TikTok. Kuaishou used the same technique of paying viewers to grow in China, according to the report. The company ultimately makes money by selling ads, so long as it brings in more money than it pays out. (In the US, Zynn doesn’t currently appear to be running ads.)

Kuaishou recently received a $2 billion investment from Tencent, the Chinese tech giant behind WeChat. The Information reported in December that the investment was meant to help Tencent “contain the threat of ByteDance,” which makes TikTok and Douyin. Kuaishou’s expansion into the US seems to be an extension of that goal, with the company using the same strategy to take on Bytedance and find a space in the market.

Zynn seems to have grown so quickly for a couple of reasons. There’s the paying users to watch videos, obviously (I was able to get $0.12 by watching videos for what felt like a few minutes). But the app also has a referral scheme that pays users for getting others to sign up and use the service themselves, which likely went a long way toward helping it spread. A big banner in the app promises $110 if you can get five people to sign up (with the fine print that most of that money only arrives if the people you refer continue to regularly use the app). The service also came pre-filled with videos because the app is able to pull content from Kuaishou. The Information reports that Zynn’s videos are “mostly” from Kuaishou right now.

Like TikTok, the app launches you straight into watching a video the first time you open it. If you want to earn rewards, though, you have to sign up. And to sign up, you have to hand over some personal info to Zynn. There’s no option to create an account directly with Zynn — it has to be tied to some other service: Google, Facebook, Twitter, or your phone number. I tried to link my Google account, but Zynn wouldn’t let me proceed when I declined to share my contact information. I ended up signing up with a burner Google Voice number. This didn’t result in the app asking for access to my contacts, but Zynn now knows my (fake) phone number. The app also requested location access during the sign-up process, but it still allows you to proceed if you decline. To cash out your rewards, you have to link a PayPal account as well.

Scientists Have Finally Made Quieter Velcro

Scientists Have Finally Made Quieter Velcro