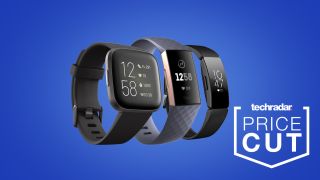 Amazon is offering some great deals on Fitbit fitness trackers right now, with savings of up to £50 on a range of models.

With gyms closed and the weather improving, getting out for a run, walk or bike ride is one of the best ways to get some regular exercise, and a fitness tracker will help you keep tabs on all your efforts. You can see your heart rate, distance travelled, step count and more at a glance, and get more detailed insight into your activities through the Fitbit app on your phone.

Depending on which model you choose, you’ll also be able to monitor your sleeping patterns (important if you’re finding yourself restless at night), manage your Spotify playlists, control your smart home, and make contactless payments (a great way to avoid touching anything in shops).

You’d better move fast, though – Amazon hasn’t said when these deals will end, but we know they’re not going to last long.

Fitbit Versa 2 | £159 at Amazon
If you’re not a fan of the Fitbit Charge 4’s small monochrome display, the Fitbit Versa 2 is a great option. Its large colour screen makes it easy to see info and alerts at a glance. The Versa 2 also features Alexa integration, letting you control your smart home and set reminders with simple voice commands. There’s £40.99 off at Amazon for a limited time.
View Deal

Fitbit Charge 3 | £79.99 at Amazon
The Fitbit Charge 3 has seen some hefty discounts since the release of its successor, the Charge 4, but this deal is particularly impressive, cutting a huge £50 off the original price. This Fitbit is very similar to the Charge 4, only lacking the newer device’s built-in GPS. It’s slim, sleek, and will track your workouts and sleeping patterns with ease.
View Deal

Fitbit Inspire HR | £69 at Amazon
Amazon has also knocked £20.99 off the slim Fitbit Inspire HR, making this already affordable fitness tracker an even better deal. It tracks heart rate, steps and workouts throughout the day, with guided breathing exercises available at a swipe of your finger to help you stay calm in difficult times.
View Deal

Fitbit Ace 2 | £46.99 at Amazon
Fitbit’s latest device for kids, the Ace 2 is designed to encourage your little ones to stay active, and develop healthy exercise and sleep habits that will serve them well as they grow up (and coul prove particularly handy in the absence of school PE lessons). There’s £23 off right now in Amazon’s Fitbit sale.
View Deal