Amazon’s ‘The Boys’ holds a mirror up to society in Season 2. It’s the best kind of ugly. 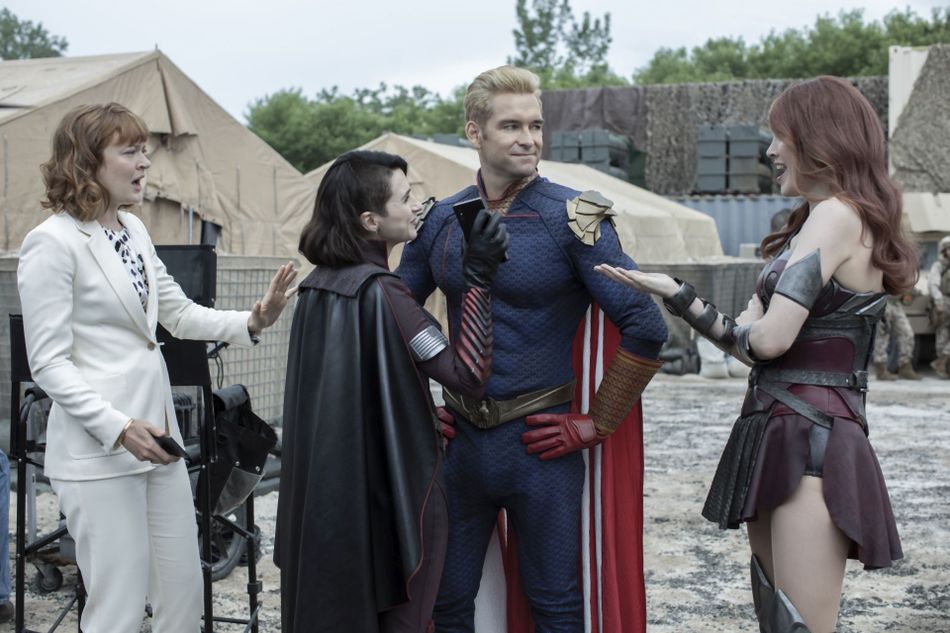 Some words of wisdom from The Boys Season 2: “If you jump ship and you let the assholes steer, then you’re part of the problem.”

No context needed; that’ll come in due time. You’ll just need to commit to keeping up with Season 2’s eight episodes, which are set to arrive on Amazon Prime Video in weekly installments, starting with three on Sept. 4 and then one more every Friday until it’s all over.

Yes, The Boys is bringing some appointment TV to Amazon’s streaming service and I’m here to tell you it’s a worthwhile commitment. The slow unfurling of this story also gives you time to catch up on 2019’s superb first season, which expertly laid the groundwork for a continuing tale that feels pressingly relevant as our march to Election Day 2020 continues.

That groundwork introduced us to a familiar modern world with one, notable difference: Superpowers are real, and their most public manifestation is a Justice League-like super-team known as “the Seven.” This isn’t a show about crimefighting, though. Behind the Seven’s polished veneer is a gang of brutish and arrogant assholes who have let power and celebrity go to their heads.

Season 2 expands that picture. We already knew the Seven were employees of Vought International, but the new batch of episodes makes it clear what that really means. The “heroes” are just figureheads for a transmedia enterprise spanning movies, comics, games, and all the rest. It’s like if the Avengers were real and Disney still owned them, but Disney itself also happened to be an extremely diversified (and shady-as-hell) company where mainstream entertainment is just a small piece of a larger income pie.

The Seven aren’t necessarily aware of the strings that pull them because they’re too busy wrangling with personal struggles. The Flash-like A-Train (Jessie T. Usher) does know the real secret to everyone’s superpowers, but he’s more worried about himself and his place on the team. Queen Maeve (Dominique McElligott), the team’s Wonder Woman, continues to grapple with the knowledge that Homelander (Anthony Starr), the Seven’s leader, is a malignant narcissist with no regard for human life.

As for Homelander himself, it’s clear that this Trumpy take on Superman isn’t the leading force we first met in Season 1. Really, he’s second fiddle to various powers-that-be – and he’s starting to understand that himself. He’s facing a direct threat to his leadership in the social media-savvy, lightning-slinging new team member, Stormfront (Aya Cash). He’s also brought to heel by Vought’s CEO Stan Edgar, played by Giancarlo Esposito with the same quiet menace that’s become something of a trademark in his most popular roles.

Then there’s the “Boys” (though they never go by that name), our small resistance squad led in Season 1 by the supes-hating Billy Butcher (Karl Urban). Billy’s MIA at the start of Season 2, and the rest of the team – Hughie Campbell (Jack Quaid), Mother’s Milk (Laz Alonso), Frenchie (Tomer Capon), and Kimiko (Karen Fukuhara) – has gone underground.

“If you jump ship and you let the assholes steer, then you’re part of the problem.”

The group is in hiding as we get going, ostensibly plotting their next move but really just drifting and hoping for someone to take charge in Billy’s absence. Hughie lacks the missing leader’s charisma and brute strength, but he wants to be that someone – and so, he continues to work on exposing Vought with Starlight (Erin Moriarity), his girlfriend (or is it just girl friend?) and woman on the inside at the Seven.

In some ways, Season 2 is The Boys we came to know in 2019. It’s still relentlessly dark and oppressively bleak in its portrayal of the world. It’s also still gory as hell, and perhaps even moreso this time. But if you’re here, you already know what to expect and are prepared for graphic scenes of explosive dismemberment and compound fractures.

Think of the opening stretch of three episodes as The Boys Season 2’s opening act. Over those three hours, we’re reintroduced to the characters of this massive ensemble and brought up to speed on what life has looked like since we last saw them. Seeds are also planted for the road ahead with the arrival of Stormfront as well as a handful of surprises.

But that setup serves a vital purpose: It primes us for a deeper dive into the forces that move this world. Season 1 revolved around the old idea that “absolute power corrupts absolutely,” but Season 2 frames this corruption against a more clearly defined society that looks uncomfortably familiar.

In The Boys‘ take on American life we see a population gripped by fear, with “super-terrorists” set up as the new boogeyman. But much like real world alarmism around gang-filled immigrant caravans and “commie” anarchists, that fictional threat is something of a fabrication. It’s just the people who wield actual power working to maintain their idea of control.

Conflict arises when the actual people in charge find themselves working at cross-purposes. There’s a lot of strong character development across the entire ensemble in Season 2 – even the forever mysterious Batman-like company man, Black Noir (Nathan Mitchell) – but it all happens in the context of a power play that’s unfolding miles above their heads. We don’t get to intimately know the real players who pulled the strings, the Stan Edgars of The Boys, because they want it that way. That’s the point!

It’s hard to speak in specifics about a season-long story that continually swerves in surprising directions. I haven’t even mentioned what’s become of the Deep (Chace Crawford) and his flirtation with a profiteering church that’s clearly a Scientology analogue. There’s also The Boys‘ particular interpretation of “girl power” – both the artifice that’s evident in corporate branding as well as the true strength of powerful women uniting because they’re tired of all the bullshit. And there’s much to be said about how the show tackles the radicalization of ideas in online settings. But those discussions will have to wait until these eight episodes and all the spoilers they contain are behind us.

What’s most impressive about The Boys Season 2 is how it weaves its way carefully through a laundry list of modern and deeply relatable issues and ideas. The result is a story that feels even more possible and grounded in a plausible reality than Season 1 managed.

The underlying takeaway of all this gets back to that quote I mentioned at the outset. In The Boys Season 2, the real heroes in the end are the ones who voluntarily choose to not be part of the problem. They don’t jump ship. They don’t run away. They stand their ground and own their place in the world, for better and for worse. Even with a bleak world view hanging over every plot point, you don’t come away unhappy. There’s forward momentum, yes, but crucially, there’s also some much-needed closure.

In that way, this is a story of resistance. It’s a showcase of how the shadowy powers-that-be can operate behind the scenes to pull the wool over society’s eyes. It’s also about how easily such illusions crumble when regular people wake up and pay attention.

WATCH: What to binge on the best 30-day free trials