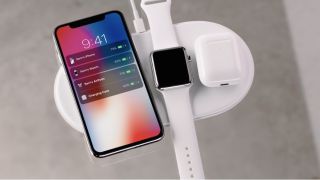 For all the exciting products that Apple announces, there are likely many that never get mentioned to the public. Apple’s AirPower wireless charging mat is a more curious case because it was actually announced by Apple only to be delayed and eventually canceled. It seemed like a charging pad that worked no matter where you set your devices couldn’t be done. But, the latest report from Bloomberg suggests Apple is still working on a wireless charging pad.

Here’s the thing: it suggest that Apple is working on a “less ambitious wireless charger,” and that might mean a basic wireless charger that carries Apple’s branding. Meanwhile more than a few competitors have succeeded where Apple hasn’t.

Nomad is the latest product maker to come out with a wireless charging pad that works like AirPower was supposed to, Android Central reports.

The Nomad Base Station Pro is a wide wireless charging pad that incorporates technology from tech startup Aira. This lets it the pad support Qi wireless charging for up to three devices simultaneously, and it does so without being overly specific about where on the pad those devices are placed.

The Base Station Pro knows when devices are on it, where they are, and charges them much like any other Qi wireless charger. Android Central notes that the device also focuses on keeping heat in check, an issue which was rumored to be the reason behind Apple’s scrapping of the AirPower project.

Another nail in AirPower’s coffin

Apple may have a wireless charger in the works, but it could just be as a way to address its suspected omission of a charging brick for future iPhones. But, that doesn’t mean it’s going to come out with AirPower at long last.

And, while one competitor in the form of Nomad’s Base Station Pro might not stand in the way should Apple launch a wireless charging mat, a whole market of AirPower-like products could make it awkward for Apple to play Johnny-come-lately. That’s just the situation Apple would likely find itself in, too, if AirPower isn’t right around the corner with the iPhone 12 launch.

Nomad’s Base Station Pro is just one product that’s beaten Apple to the punch. It’s not alone, though. Xiaomi has a two-device charging pad that doesn’t make much of a fuss about where you set your device, and the tech from Aira at the heart of the Nomad Base Station Pro could show up in any number of other devices.

So, if Apple’s AirPower never comes, you won’t be missing out. If it does, that’ll just mean more choice for you.