Apple Watch deals: the Series 3 is still available for one of it’s lowest prices ever 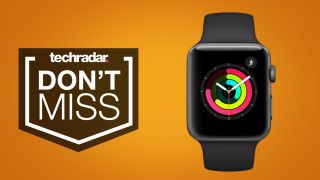 There’s still time to grab a cheap Apple Watch deal with this Apple Watch Series 3 for just $179 (was $199) at Amazon US right now.

Surprisingly, this already discounted cheap Apple Watch sale hasn’t sold out yet since it was put up as part of the Amazon Memorial Day Apple sale. This is one of the cheapest Apple Watch prices we’ve seen yet since the Apple Watch 3 settled into it’s new $199 retail asking price late last year and a great way to pick up a cheap Apple Watch.

The Apple Watch 3 may be a little older than the newer series 4 and 5, but it’s still running on the latest iOS software and is so much more affordable right now. It’s a little bulkier around the edges but if you’re looking for a cheap Apple Watch that will still monitor heart rates, play tunes, and is water-resistant then this is a great option.

If you’re in the UK, there’s also a fantastic offer to be had with this Apple Watch Series 3 for £199 at John Lewis. Not only is it a good price for an Apple watch, but you’re also getting John Lewis’s two-year warranty included and the option to trade in your old Apple Watch for up to £120 – which makes this potentially a really cheap buy.

Not in the US or UK? check out the best Apple Watch deals just below

The best Apple Watch deals in the US and UK

Apple Watch Series 3 (GPS) |   $179 at Amazon
Astonishingly, this $20 off Apple Watch 3 deal from Amazon hasn’t sold out yet. This Series 3 smartwatch includes GPS technology and offers continuous heart rate monitoring as well as a wide range of iOS apps. It’s simply a great way to get into smartwatches for cheap.
View Deal

Apple Watch Series 3 (GPS) | £199 at John Lewis
If you’re in the UK, this cheap Apple Watch deal from John Lewis is a great option. Not only are you getting their fantastic two-year guarantee included for an already cheap price, but you’re also getting the option to claim up to £120 when you trade in an old Apple Watch.

The best Apple Watch deals in your region

If you’re looking for the whole range, then our Apple Watch deals article looks at every generation of smartwatch and compares all the best retailers near you. If you’d like to see what other brands are on offer, then our best smartwatch deals page is the best place on the web for smartwatch model and price comparison.