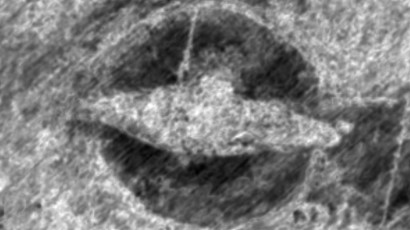 For the first time in a century, archaeologists will excavate a buried Viking ship. Located a less than 2 feet below the surface, the ship is being ravaged by fungus, forcing archaeologists to act quickly.

With funding from the Norwegian government, archaeologists with the Norwegian Institute for Cultural Heritage Research (NIKU) will begin excavations on the Gjellestad ship this June, reports The Local.

Scientists had been reluctant to dig it out for fear of damaging it further, but they don’t appear to have much of a choice, given the recent discovery of fungus munching away at the buried relic.

The Gjellestad Ship was discovered in 2018 with ground-penetrating radar, and it sits just 20 inches beneath the surface on a farm in Norway’s Østfold county. It’s around 20 meters (66 feet) long and around 1,200 years old, though the dating remains a rough estimate.

“The monumental ship graves like Gjellestad were built for some of the most powerful individuals that lived in Southern Norway in the Viking era.”

This ship is within a degraded burial mound, and other sites nearby suggest this place was once a Viking cemetery. Vikings had a deep cultural affinity with ships, burying high-ranking individuals inside of them, along with copious amounts of grave goods.

Last year, NIKU archaeologists took a sample of the ship’s lower keel for analysis. The results were not encouraging.

“The lower part was very mushy in the surface, and microscopic analyses demonstrated very profound evidence of active fungi, demonstrating that it was under active decay,” Jan Bill, curator of the Viking Ship Collection at the Museum of Cultural History, told Gizmodo. “It was thus clear that with the current conditions—situated above the groundwater level in a sandy and silty environment—wooden remains would not survive for long.”

Hence the need for excavations, which are slated to begin next month. The team will undertake special precautions, given the ongoing covid-19 pandemic. As Bill explained to Gizmodo, the NIKU team will follow the same guidelines outlined for other workplaces in Norway, such as maintaining a minimum distance of 1 meter (3.3 feet) between individuals, a single set of tools and equipment for each team member, frequent hand-washing, and so on. Bill said these prescriptions aren’t ideal but are “manageable.”

Despite these difficult conditions, the undeniably good news is that they get to excavate a buried Viking ship—something that hasn’t happened in over 100 years. As Bill told The Local, the only three previous digs of Viking ships came in 1868, 1880, and 1904, and these excavations were not conducted with modern techniques and methods. The new dig could result in completely new findings and revelations.

As you’ve probably guessed by now, the archaeologists, in addition to uncovering grave goods and new clues about the vessel, might actually find a body within the ship. If a body is found, it’s likely to be in very bad shape.

“We do expect that a body was once there, since no Scandinavian ship graves have proved to be cenotaphs,” Bill told Gizmodo. “The chances that remains are preserved are slim, as the burial may well have been robbed at some point in time—most ship burials are—and as preservation conditions are not ideal for human bones and tissue.”

That said, the NIKU team will be ready. In addition to documenting any preserved human bones and a “body stain” (a discoloring of sand at the location of the body), the scientists will try to collect genetic evidence, fats, stomach contents, and a chemical map of the area. Assuming any of this is available, of course.

As for the Gjellestad Ship itself, Bill and his colleagues are expecting to uncover much of the vessel, which will allow them to learn about its construction.

“Currently, we do not know if the ship is from the earliest part of the Viking Age, or rather from the middle of the period, but we will get an answer to that,” said Bill. “Secondly, we expect to be able to identify large parts of the objects put into the grave and traces of different actions carried out as part of the burial ritual—again with the expectation that we will be able to learn much new, because excavation techniques have improved so much since earlier excavations.”

The excavation could also yield new insights into other Norwegian ship burials and boost archaeologists’ understanding of what they represented in terms of Viking rulership and politics.

“Obviously, the monumental ship graves like Gjellestad were built for some of the most powerful individuals that lived in Southern Norway in the Viking era,” said Bill.

What is cloud hosting. Kissenhüllen. January.