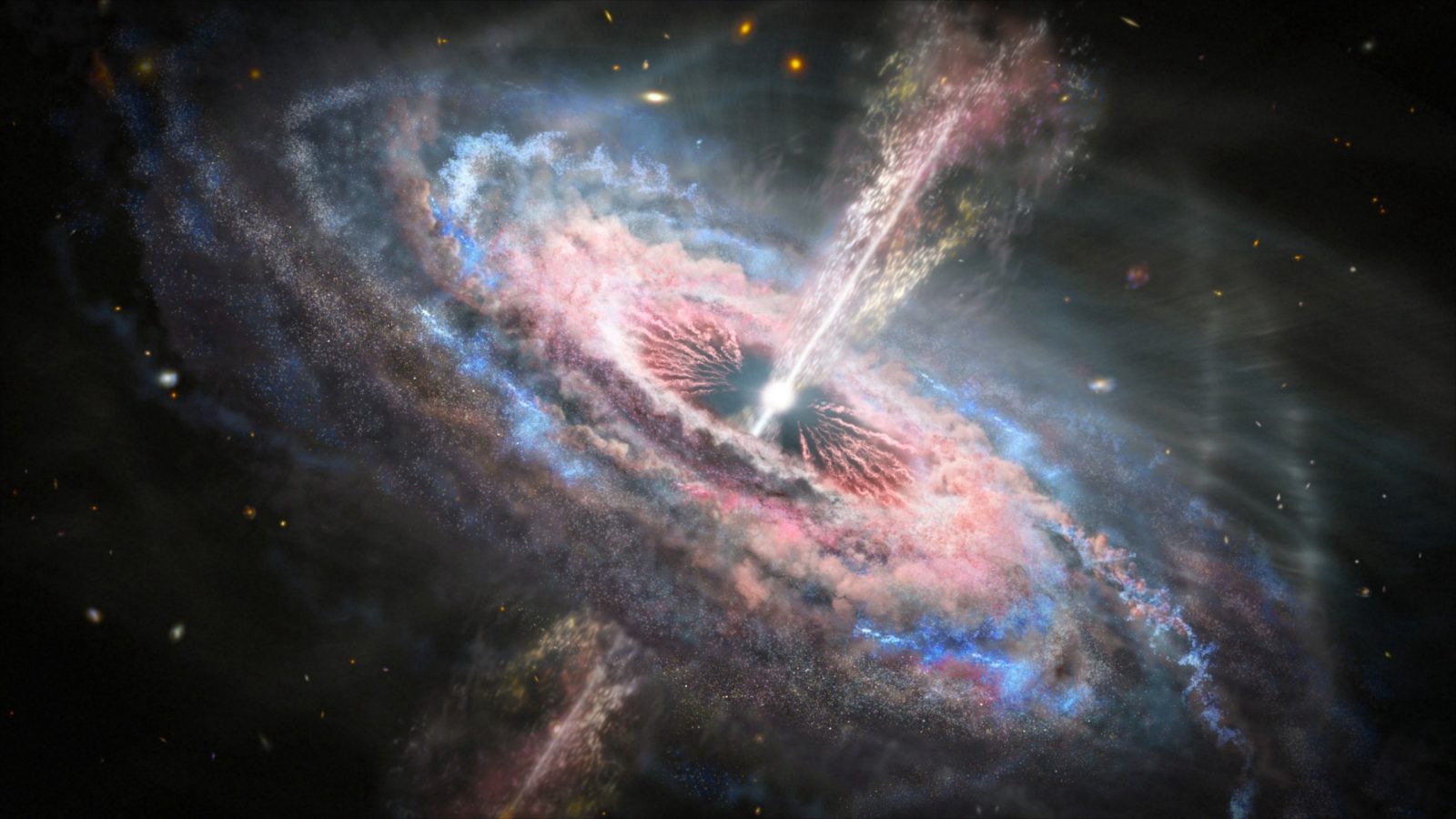 More than 13 billion light years from Earth, the quasar J0313–1806 radiates vast quantities of electromagnetic radiation. This body, formed just 670 million years after the Big Bang, is seen shining with 1000 times the total light produced by the Milky Way Galaxy. The supermassive black hole at its center is more than 1.6 billion times more massive than the Sun.

At a distance of more than 13.03 billion light years from Earth, J0313–1806 is the most distant— and thus the most ancient — quasar yet seen by astronomers. This supermassive black hole is seen radiating vast quantities of radiation when the Universe was just 5% of the current age of the Cosmos. This body is 20 million light years more distant than the previous record-holder for the most distant quasar known, discovered just three years ago.

This ancient body feeds extreme quasar winds, sending charged particles racing away from the object at 20% of the speed of light. The host galaxy housing J0313–1806 was also a region where vast numbers of stars were born. While just one star is born each year, on average, in the Milky Way, the host galaxy for this quasar sees around 200 stars light up for the first time each year.

The supermassive black hole at the core of this system is thought to be ingesting the equivalent of 25 Suns every year, driving winds of hot plasma from the body.

This extreme age challenges notions of the formation of the first black holes in the Universe. Astronomers are puzzled learning how this structure formed in such a short period of time.

“This is the earliest evidence of how a supermassive black hole is affecting its host galaxy around it. From observations of less distant galaxies, we know that this has to happen, but we have never seen it happening so early in the universe,” said Feige Wang from Steward Observatory, managed by the University of Arizona.

It all started with a Big Bang — BANG!

Quasars are thought to be centered around supermassive black holes that can contain millions or billions of times as much matter as the Sun. As enormous quantities of matter — including entire stars — spiral into the black hole, the process can release more energy than entire galaxies.

The first quasar was seen in 1960, but the extreme distance to this body was not recognized until three years later. Being sources of powerful radio waves, these objects were first called quasi-stellar radio sources, from which we get the name quasar.

The process of forming a quasar likely begins when a supermassive star collapses into a “normal” stellar black hole at the end of its life. Over time, black holes can merge, eventually forming supermassive black holes. With a steady supply of material, these objects can outshine brighter than their home galaxies.

However, this process takes time, and J0313–1806 is not old enough to have accumulated enough material to develop as a quasar by this method. This suggests this ancient quasar must have formed via another means.

Researchers seeking to understand how quasars formed in the early Universe typically held to one of two schools of thought. One possibility suggested these bodies were fed by first-generation stars composed almost exclusively of hydrogen and helium. A second idea proposed that massive black holes quickly formed within dense star clusters, quickly adding mass to the system.

However, J0313–1806 formed too quickly for either of these scenarios, suggesting still another scenario was needed to explain this extreme quasar. Even if this supermassive black hole formed just 100 million years after the Big Bang, it still would needed an initial mass of 10,000 solar masses to grow so quickly.

“This tells you that no matter what you do, the seed of this black hole must have formed by a different mechanism. In this case, one that involves vast quantities of primordial, cold hydrogen gas directly collapsing into a seed black hole,” explains Xiaohui Fan, from the Department of Astronomy at the University of Arizona.

The collapse of cold hydrogen gas directly into a black hole is the most-likely explanation for how J0313–1806 could have grown to 1.6 billion solar masses in such a short period of time, researchers concluded.

It’s just going through a phase…

Study of J0313–1806 could assist astronomers in learning more about galaxies in the ancient Universe. This body could offer astronomers a glimpse of how galaxies formed in the early Universe, when processes that form these families of stars were still far more active than we see them today.

“The most distant quasars are crucial for understanding how the earliest black holes formed and for understanding cosmic reionization — the last major phase transition of our Universe,” said Xiaohui Fan, Professor of Astronomy at the University of Arizona.

Supermassive black holes in the modern Universe could be the reason that many modern galaxies have stopped forming stars. Such bodies could be pushing cold hydrogen gas — essential for the formation of stars — away from these galaxies, hindering stellar formation.

Future observations — including data collected by the James Webb Space Telescope — could resolve detail around the quasar, allowing astronomers to view the outflows emanating from J0313–1806.