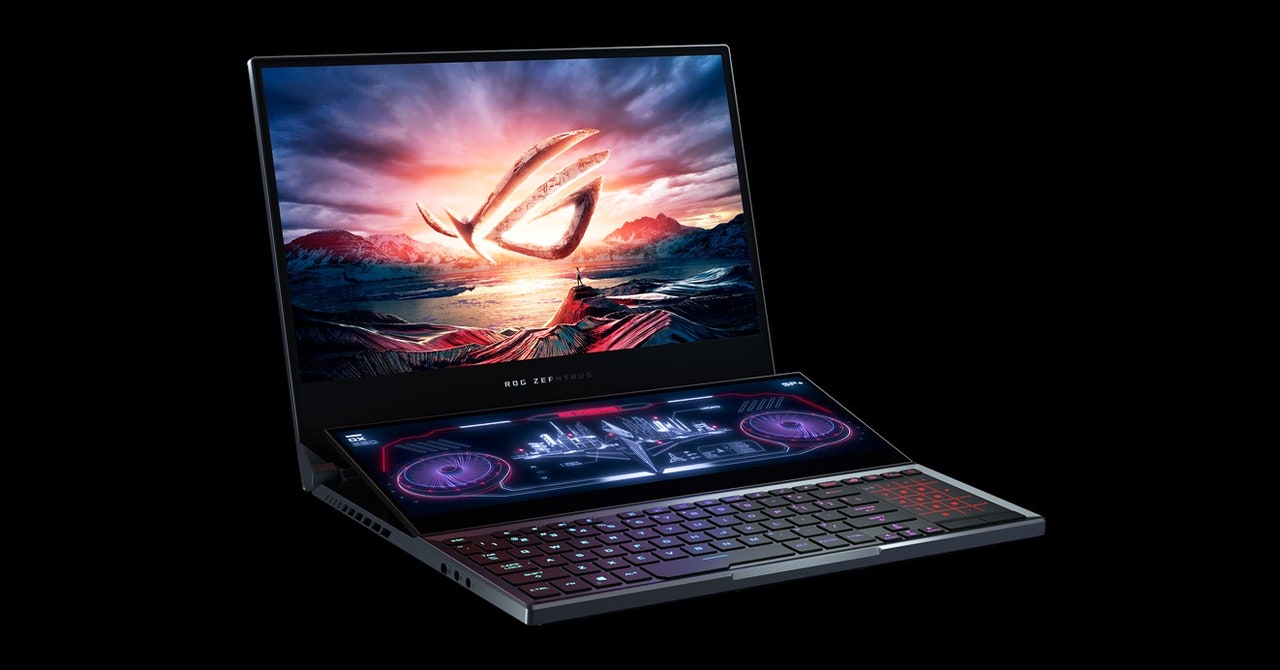 The Asus ROG Zephyrus Duo 15 is a gaming laptop built for a world that doesn’t exist anymore, and maybe never did. That’s not to say that gaming laptops aren’t important in our new and ruined world, but one this ostentatious somehow feels like a relic of a bygone age.

It has two screens. That’s the Duo part. It’s also the whole “why does this exist” part. Imagine the MacBook Pro’s Touch Bar, but if it was as big as a keyboard. The Duo’s secondary display takes up half of the lower part of the laptop. Otherwise, this is essentially the standard Asus ROG Zephyrus chassis we’ve seen on the non-Duo Zephyrus 15. Same dimensions, same display, same hardware. Which means it’s a good and capable gaming laptop. So why does it need a second display? It doesn’t.

Two Displays, Both Alike in Dignity

This is not the first dual-screen laptop from Asus. And on paper, it’s not a bad idea for content creators.

When you’re working in Adobe Photoshop or Premiere, a laptop display can feel cramped. That’s why you see so many creative professionals hooking up MacBook Pros to full-size desktop monitors. Extra screen real estate is nice to have when you’re juggling so many windows. Similarly, a secondary display like the one on the Duo could be helpful when you’re doing intensive work—like videogame livestreaming.

There’s a catch though. OK, several catches. First, and this is the same one that makes Apple’s Touch Bar a misfire from a design perspective: It’s just not intuitive to look down from your main screen to check out the fun-sized second screen that’s at keyboard-height. It’s like typing on a tablet—you have to keep looking down, not to mention it feels stilted and uncomfortable.

The second screen does sit at an angle, but I kept wanting to swivel it out and just have it beside the main display on the Duo. There’s something about having two displays side-by-side that feels more intuitive than having them stacked on top of each other.

Game streaming is the stated purpose of this two-headed machine, but streaming from a laptop is a pain. If you’re unfamiliar, to stream a game to a service like Twitch or YouTube you need to be running the game, a webcam (and often a separate microphone), and broadcast both your gameplay and the output from your webcam and mic. It’s common for professional streamers to use two computers for this, but you can do it from a single gaming PC if it has enough horsepower (and usually a second full-size monitor).

You can stream games from a laptop, technically, but it’s less than ideal. Even the Zephyrus Duo doesn’t crack that particular formula. A second display and top-tier hardware improve the streaming-from-a-laptop experience, but it’s still a little bit like trying to do an entire day’s work from your phone. Sure, you can do it. But you’ll feel cramped and confined.

There are some other odd design choices here that make the Zephyrus Duo, which is set to launch in July, a puzzling machine. The second screen has a higher 4K resolution than the main display (1080p), which makes for an awkward user experience if you upscale the second screen to its maximum resolution. Windows has trouble with the mismatched resolution and gets confused about where each display is in physical relation to the other, so moving things from one screen to the other gets tricky if they’re not both set to 1080p.

The laptop’s chassis has excellent durability, aesthetics, and cooling capabilities, but I’m not a fan of its keyboard layout. To accommodate the second screen, the keyboard is pushed all the way to the bottom edge of the laptop, with the trackpad squished in where a numpad would be. It’s an exclusionist design since it makes the Zephyrus Duo almost impossible to use if you’re left-handed.