Ball-Tracking Basketball Hoop Makes it Impossible To Miss a Shot 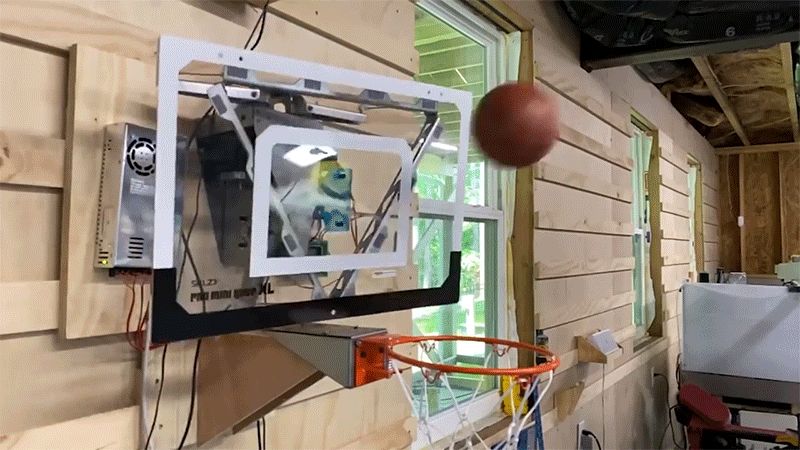 After designing a curved basketball backboard that redirects every shot through the hoop, Shane Wighton has engineered a new and improved version that’s even more forgiving by actively tracking a ball’s trajectory and then repositioning the backboard so every shot is nothin’ but net.

Wighton’s previous design took a passive approach to turning anyone into a potential NBA superstar using some complicated math to determine the perfect elliptic paraboloid shape for the backboard.

However, it required the shooter to stand and throw from a very specific spot and exact distance from the backboard, making it useless for even a simple game of Horse, let alone a regulation basketball game. The NBA probably isn’t knocking on Wighton’s door about adopting his new robotic basketball hoop for the league, but it’s a neat hack nevertheless.

The depth-sensing Microsoft Kinect might be all but dead as a console gaming accessory, but the hardware continues to thrive as an inexpensive way for hackers and tinkerers to realize intelligent computer vision for their projects. In this case, Wighton has one mounted above the backboard and hoop to not only recognize the ball and track its trajectory but also identify multiple players—allowing him to tune the board to his advantage for a game of one-non-one. In other words: it’s great for cheating too.

Wighton calculates that on average the electronics and custom software that power the backboard have roughly 600 milliseconds to identify the ball, distinguish it from the heads of those playing, calculate its trajectory and ultimate point of impact on the board, and then make the appropriate positional adjustments to deflect the basketball down and into the hoop.

The current version works, most of the time, but is limited by the speed of the processors used in the microcontrollers which are maxed out. With a few key upgrades, including faster, stronger, and more accurate electric motors repositioning the board, as well as beefier processors, the success rate of this never-miss hoop could be dramatically improved to the point where even Shaq could muster a respectable free throw percentage.