Baratza Vario-W Review: A Grinder for the Serious Coffee Brewer 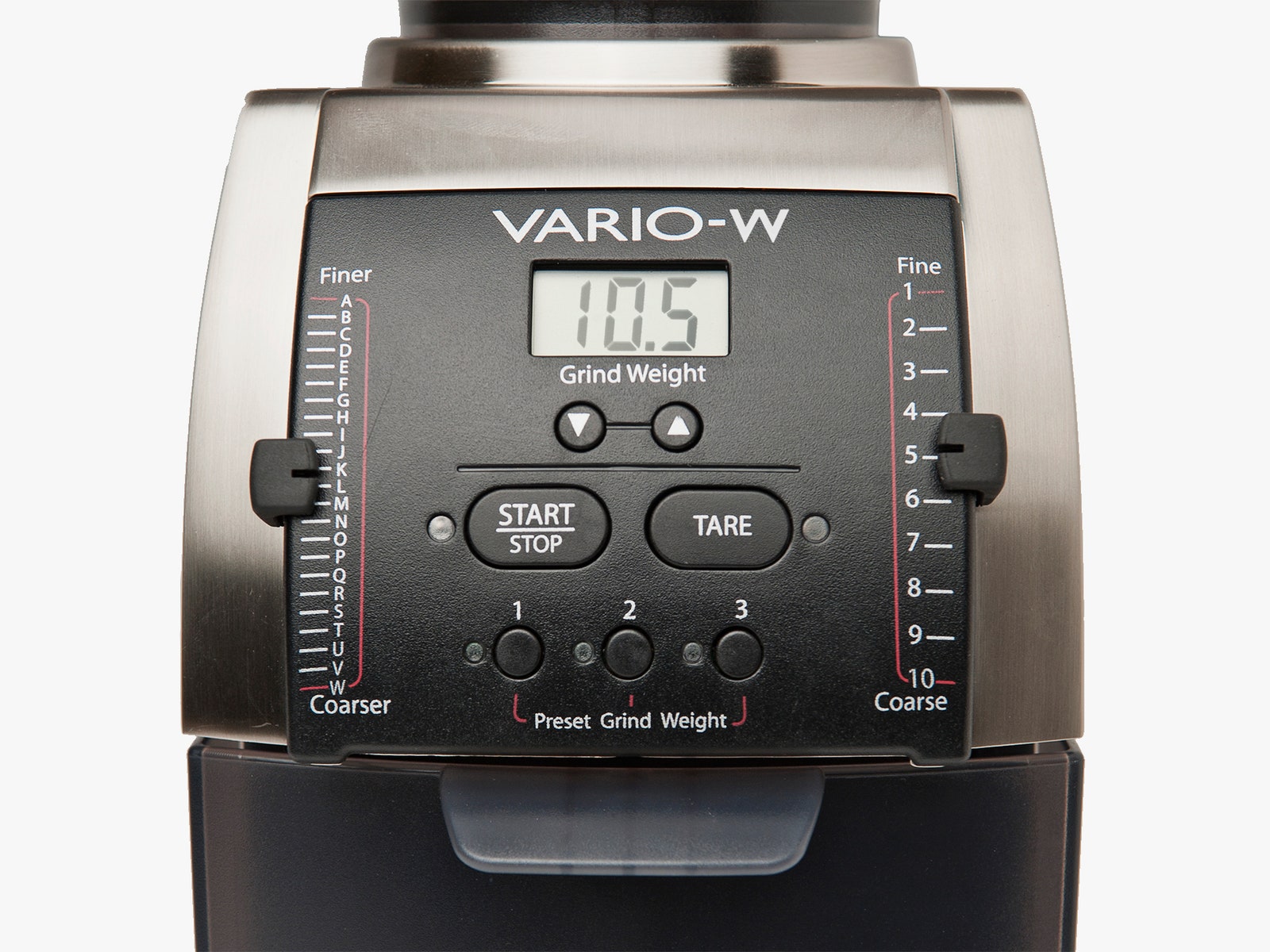 My coffee grinder is one of my steadiest, most faithful kitchen companions. After studying up on reviews, I put a Baratza Encore on our wedding registry, and after eight years of heavy daily usage it’s still chugging away. At most, I’m starting to wonder if it’s time to send it in for a well-deserved refurb.

My caffeine ritual is one that fellow grinder-folk will find familiar, give or take a few degrees of fussiness. I keep a large bag of whole beans in the freezer and pour them into a glass jar in my cupboard every couple of days. Then I weigh my beans out on a scale, pour them into the (empty) grinder and grind. Whatever the brewing method, I start by weighing my beans.

Perhaps since I was wondering about refurbishing the Encore, I started thinking about what more I might want from a new grinder. For years, I’d wondered about a semi-pro machine by Baratza called the Vario-W, which came out about a decade ago and grinds by weight. I’d also read about a newer OXO grinder with similar capabilities, which sounded promising, except that it’s also reported to make a holy mess.

“When you want more consistent, more delicious coffee, weighing your beans is the way to go—by leaps and bounds,” says Sam Schroeder, an award-winning barista and co-owner of Washington State’s Olympia Coffee. “When you make coffee, you essentially want a recipe. Measuring by weight will make for the best, most consistent recipe.”

Much in the way that bakers prefer to weigh out their flour instead of using measuring cups and teaspoons, weighing out coffee is crucial when you want a consistently great cup. That said, making coffee is a tinkerer’s delight and surprisingly forgiving. With simple trial and error, you can easily up your game, and to do that means pegging all of your variables and tweaking them one at a time. Stuff like water volume, water temperature, agitation (stirring or pouring over the grounds), coffee type, grind size, grind consistency, brewing method, and steeping time are examples. Schroeder compares it to making pizza, of all things. “Think about it,” he says, “it’s cheese and bread. Even when it’s bad, it’s good.”

One of the best ways to speed yourself to your version of a perfect cup is to weigh out your beans. Chez Joe, for instance, I coarsely grind 40 grams of beans for my half-liter French press, and use 22 grams of fine-ground for my AeroPress. The amount you use might be different, but by being consistent in your coffee making, particularly with weight, you can fine-tune your way to an excellent cup. When you find a formula that works for you, lock it in and you have a happy-making coffee, every morning, forever.

To try this myself, I opted for the original, calling in a Baratza Vario-W, and, once I figured it out, I was impressed. With bean storage, a scale, and the grinder all in one, it streamlined my morning ritual.

With it, I could fill the hopper on top with the bag-o-beans that I keep in the freezer, tell it how many grams I wanted, start it up, and walk away. Compared to my Encore, I quickly understood how quick and quiet the Vario-W is, charging through a bunch of beans in a fraction of the time and with a pleasant reduction in grinding noise. There was a fair bit of static electricity causing the grounds to stick to the plastic parts of the grinder and generally making a mess, but I’d seen something similar with my Encore, and figured I’d deal with that problem later.

Right off the bat, I was both wholly smitten by the Vario-W and a bit stymied. It is not the kind of appliance that you can just take out of the box and start using. There’s a start/stop button, but to get it to start, you need to program the amount of coffee you want into one of the three preset buttons, hit tare, then a preset, then start. You can’t just hit start and make it go, then hit stop willy-nilly. Nor can you just grind a hopper-ful for Mr. Coffee when you have company coming to visit. This took enough figuring out that for a little while, I wondered if it was broken. Once you have your presets set, though, this will bug you less and make more sense.

Worse, however, is the mess it can make. Static is an issue with many grinders, where beans become charged as they pass through the burrs then some of the grounds cling to the plastic grounds bin like metal filings on a magnet. When you move with the grounds bin to pour the grounds out or just gently tap it to get the last bits to fall, grounds can be spread like stardust across your countertop, bread box, and butter tray.

The finer the grind, the more problematic it becomes. It is notably worse with the Vario-W than with the Encore. My wife Elisabeth, who’s always been tolerant of the Encore’s mess, walked through the kitchen while I was testing the Vario-W and gently suggested that I sweep the floor. It’s worth noting, too, that I tried some of Olympic Coffee’s Big Truck Blend and the static problem became much more manageable. Some beans will be way worse than others, so you may or may not encounter this problem.

Another strike against the Vario-W is its rather narrow range of grind sizes. A Baratza technician ballparked that it has only about three-quarters the range of an Encore, matching up at the fine end, but stopping just shy of a grind size large enough to make a perfect pot of French press. While this isn’t the only high-end grinder to leave coarse-grind lovers in the lurch, it’s a surprise, and it may be a deal breaker for some. It is for me, especially since my Encore has been doing a splendid coarse grind for close to a decade. I could learn to deal with or work around the messiness factor, and I even went as far as asking a Baratza technician for a coarse-grind workaround and he was surprisingly game about it, but I can’t make a product recommendation based on a hack. If you want a coarser grind, you’ll want a different grinder.

(Side note: For a little while, Baratza made a sort of adapter that you plugged your entire Encore grinder into, like a ski boot into a binding, that allowed you to grind by weight, but it was way ahead of its time and discontinued a couple years ago.)

Processing it all, particularly the amazing ability to grind by weight, the Vario-W changed the way I think about grinders. As someone who weighs out every batch of coffee that I make, this was a clear step forward. Yet the lack of grind size options at the coarse end and the particularly bad mess it can make with some beans helped me understand that this was not the machine for me. It felt like an ex from your early dating days who taught you something important that you would need from future partners, but who was such a slob that you broke up three weeks after moving in together.

(Side note #2: I ran that analogy past Elisabeth who immediately said, “Wow! Which ex was that?”)

You may also balk at the price. It’s $560, which buys features like flat burrs (instead of the more-common-at-home conical burrs) which tends to create a more consistent grind size, and more grind adjustment—a ridiculous 230 settings—than you will likely need. It’s a lot to swallow for the home user when an Encore is about $140.

And yet! Even after all of these years, the Vario-W is still one of the most impressive and important grinders out there—an idea from the past, still pointing us toward the future. If it were up to me, an Encore with built-in weight capabilities would be the perfect setup for most semi-serious home brewers. What I would like to give a full-throated cheer to is the repairability of Baratza products as a whole. After years of use, you can send it back for refurbishing, or buy individual (and often fairly inexpensive) parts. When so many kitchen products at at a similar level of quality don’t offer this option, it’s incredibly refreshing and has turned me into a customer for life.

Coffee is complicated, the kind of thing where the more you know, the more there is to know, but by weighing it out, you pave the way to a better, more consistent brew. The Vario-W’s weighing feature alone is leaps and bounds better and more helpful than any “smart kitchen” app or Bluetooth connection you could impose on a coffee grinder.

“When you buy beer, you just open the beer and drink it, but when you buy coffee you make it. There’s lots to get wrong,” says Olympia Coffee’s Sam Schroeder. But just like when you make your own pizza, you’ll enjoy what you make along the way.