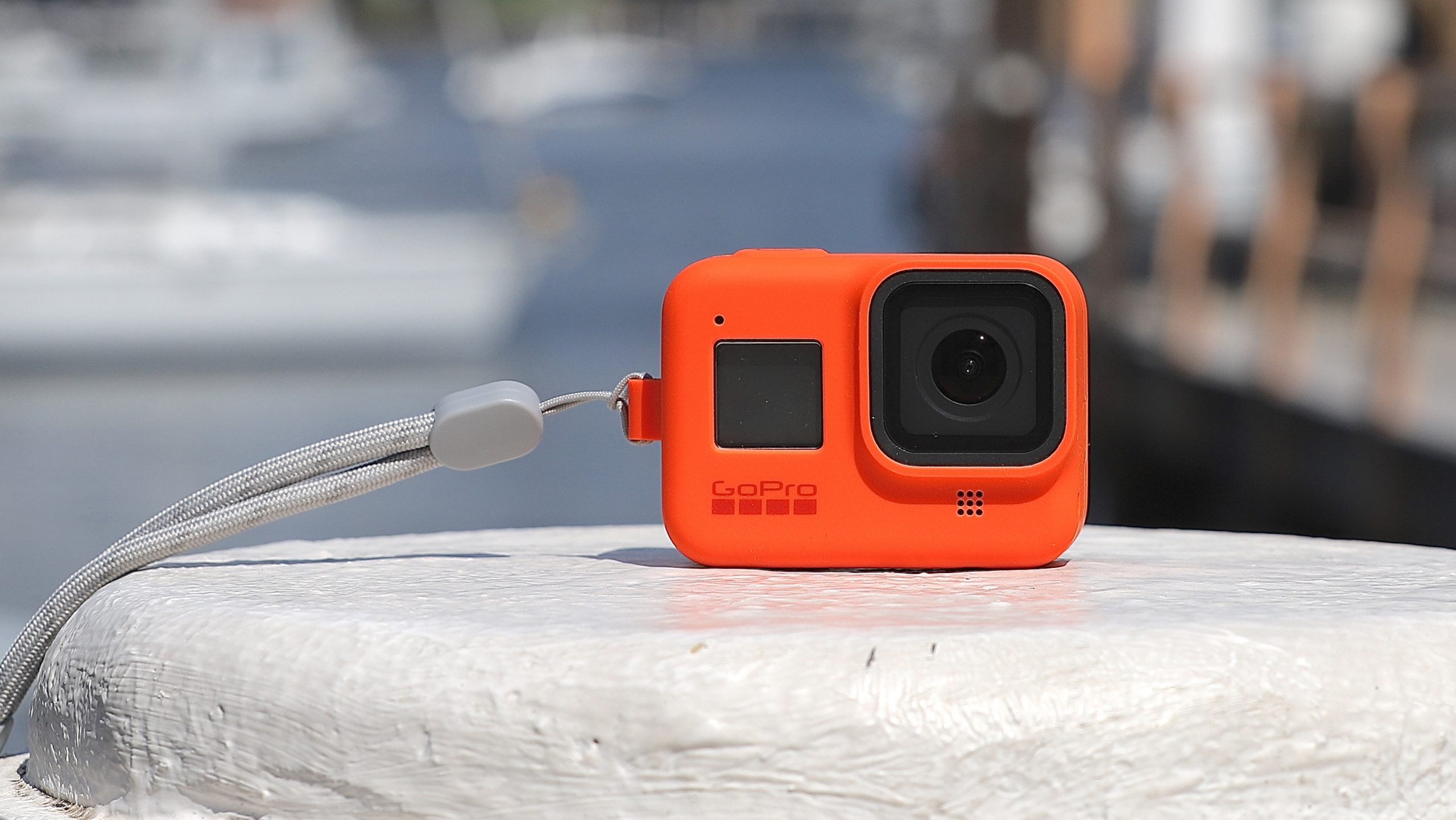 Searching for the best action camera you can buy? You’ve come to the right place. Whether you’re looking for a GoPro or a more affordable alternative, we’ve tested all the latest models and have boiled down all of our findings into this in-depth guide.

Smartphones may now be capable of shooting some impressive 4K video, but action cameras still certainly have their place – particularly when you want to shoot video or stills somewhere that isn’t a suitable environment for a glass slab that’s home to your entire digital life.

The latest models, like our current top pick for the best action camera – the GoPro Hero 8 Black – combine impressive 4K video with excellent stabilization that’s designed to remove the judder and shake from even the most rock-strewn mountain bike trail. That GoPro is also waterproof, shockproof and comes with a new wind-resistant microphone.

Some action cameras have leaped beyond common tricks like shooting moving timelapses (or Hyperlapses), too. If you’re tired of having to predict where you should be pointing your action came to catch the crucial moments, then 360-degree models like the GoPro Max and Insta360 One R could be for you.

These action cameras capture the whole scene around you, then let you ‘punch’ into certain parts of it so you can create a standard ‘flat’ movie that contains all of the highlights. If you’re prepared to take a slight hit in quality, they’re a great new option.

Of course, you might not want to spend big bucks on the latest tech, so we’ve also included older action cams like the GoPro Hero 7 Black and Olfi One.Five Black, which continue to offer great value. Particularly if all you’re looking for is a cycling safety camera to stick on your helmet or handlebars.

Whatever kind of tough video shooter you’re looking for, here are the best action cameras you can buy today.

Best action cameras 2020 at a glance:

The best GoPro yet

The latest GoPro flagship has stolen the crown from the Hero7 Black as the king of action cameras. The GoPro Hero 8 Black is easy to use, has plenty of new features and boasts the best image stabilization tech till date, putting its predecessor to shame. Most importantly, there’s a livestream option on board, so you can share your adventures (or misadventures as the case may be) with the rest of the world directly on Facebook if you want. GoPro has even streamlined the app, making it easier to edit and share your clips. It’s also easier to mount the camera onto a tripod, thanks to the folding ‘fingers’ on the bottom of the chassis. All in all, it’s a well thought out action camera for pros and beginners alike.

Can struggle with voice commands

While it may share pretty much of the same headline video specs as the Hero6 Black that it replaces, the Hero7 Black offers a number of big improvements. The most significant of this is the addition of GoPro’s all-new HyperSmooth image stabilization technology. It really is very impress, delivering gimbal-smooth video footage.

TimeWarp video is a further new feature, one that combines the idea of regular frame-by-frame time-lapse shooting (which you can still do separately) with HyperSmooth – essentially, a stabilised hyperlapse, while the user interface has been overhauled for a much better user experience.

Delivering buttery-smooth 4K video footage the Hero7 Black is the best action camera you can buy.

More than just a GoPro clone

No motion stabilization for HDR video

DJI might be better known for its class-leading drones, but the Osmo Action is a compelling GoPro alternative with some nifty tricks and a tempting price tag. The front display and general user-friendliness mean it trumps the Hero 8 Black for vloggers who like to shoot a lot to camera, while the video quality is right up there with GoPro’s flagships.

The image stabilization, known as RockSteady, might not be quite up to the HyperSmooth 2.0 offered by our top choice, but it’s not far off and the Osmo Action does also offer handy extras like a removable battery and a removable lens cover. If you’re a vlogger who shoots in places that are too demanding for most phones or cameras and don’t want to pay top dollar for a Hero 8 Black, then this is a great alternative.

An imperfect but impressive modular option with solid quality

The GoPro Hero 8 Black may offer handy add-ons, but the Insta360 One R is a properly modular action camera, comprised of a battery, control and camera block. This means you can switch the latter at will to suit your shooting situation, choosing between a 4K action cam and a 360-degree camera. There’s even a 1-inch sensor block, which we’re in the process of testing. But does it deliver on its promise of being three cameras in one? In many ways, yes: clipped together, the One R is only slightly larger than the Hero 8 Black and feels surprisingly sturdy – though you need to fit the mounting case to make it water resistant. Image quality is also sharp and relatively stable, with good detail in darker areas. In other ways, though, it’s less successful: the image processing (at least on the 4K module) can’t match the Hero 8 Black, while the 1.3-inch touchscreen is too small for framing 16:9 footage. It’s worth remembering, though, that the dual-lens bundle costs less than the GoPro Max alone. For that, you get a modular approach that’s flexible and well-executed, delivering great 4K video and solid 360-degree footage. Provided software updates can iron out some of the processing issues, the Insta360 One R is well worth a look for those who want to tinker with both 360 video and standard action cam footage.

Not the best in low light

If you only want to shoot traditional action camera footage (that is, non-360 video) at the best possible quality, then the GoPro Hero 8 Black remains the best choice. But if you like the sound of being able to reframe your videos after they’ve been shot, and are looking for great audio quality, then the Max is well worth considering.

GoPro’s most expensive action camera uses two fisheye lenses to shoot spherical 5.6K video, which you can later crop into standard 2D video using OverCapture software. Like the Hero 8 Black, it’s also packed with features including six-microphone audio (which records excellent audio, if not quite up to the level of GoPro’s ‘shotgun mic’ claims), shooting features like TimeWarp, and built-in mounting fingers to ensure you don’t need a extra mount mount to attach it to anything.

The downsides are the fact that it doesn’t offer the best 2D video quality (due to the need to convert it from a fish-eye image, and the max 1440/60p resolution) and that it can’t quite match the Hero 8 Black in low light situations. But it remains the best waterproof, 360-degree action camera around – at least until we give our final verdict on the very promising Insta360 One R.

LCD can be unresponsive at times

While the Hero 7 Black is one heck of an action cam, the Silver fills the void beneath this. And while it can’t quite pull off all the fancy tricks as its big brother, it’s priced far aggressively, especially once you see just how much tech you still get.

This includes stabilised 4K video recording, waterproofing down to 10m, together with a 2-inch touchscreen on the back and Voice Control that allows you to instruct the camera to perform almost all main functions without you raising a finger. A fine choice for first-time users.

No mounts in the box

If you’re aquatic-minded, or you need to know exactly where you were, and how fast you are going when you took a video, buy a GoPro Hero7 Black.

However, if you’re more interested in saving money on features you didn’t even want, the Yi 4K+ Action Camera is one of the simplest and best designed gadgets around.

Everyone considering buying an action cam should have a look at the Yi 4K+ Action Camera because it’s almost exactly the same and, in some ways, even better than a GoPro.

Not only ultra compact, but crushproof and waterproof with it, the RX0 II can shoot 4K footage at 30fps and Full HD footage at 120fps. This second-generation model comes with a Soft Skin Effect mode and advanced Eye AF, while Sony’s also managed to squeeze in a tilt-able LCD screen (capable of tilting up to 180° and down by 90°).

It’s a bit fiddly to use and expensive, so doesn’t lend itself to the casual user, but for those looking for a rugged camera that can shoot great 4K footage, this shouldn’t be ignored.

App is basic and clunky

There’s not much an Olfi one.five owner is left wanting, despite the unit costing half the price of GoPro’s leading camera.

GPS, voice activation and the ability to link external sensors, such as Garmin’s numerous cycling products, are just a few things missing from the package, but for those who simply want to capture good-looking footage without breaking the bank, there’s very little to complain about.

A 4K action camera at a cheap price

Image stabilization could be better

How often do you take an action cam underwater? If the answer’s not a lot, then the Yi 4K Action Camera could be for you. While there’s an optional underwater case available, the camera isn’t waterproof.

There is a large and responsive touchscreen, a big battery and a fast file transfers however, and while it may lack a few niceties – and we would include lens distortion correction and image stabilization in that list – the Yi 4K Action Camera remains a great value addition to any adventurer’s kit bag.

Records 4K video up to 60fps

Audio isn’t great in all situations

Not nearly as durable as a GoPro

Though not technically an action camera, DJI’s Osmo Pocket is still going after the same audience. While it’s not as rugged as dedicated action camera rivals, the Osmo Pocket has a clever trick up its sleeve in the shape of a built-in gimbal.

The 1/2.3-inch sensor is capable of recording 12MP still images and 4K video footage up to 60fps, while there are built-in dual microphones that use advanced noise-canceling algorithms, which DJI says should ensure that you capture high-quality audio to match your footage. We’ve already got our hands on one, and you can see what we think by clicking the link below.