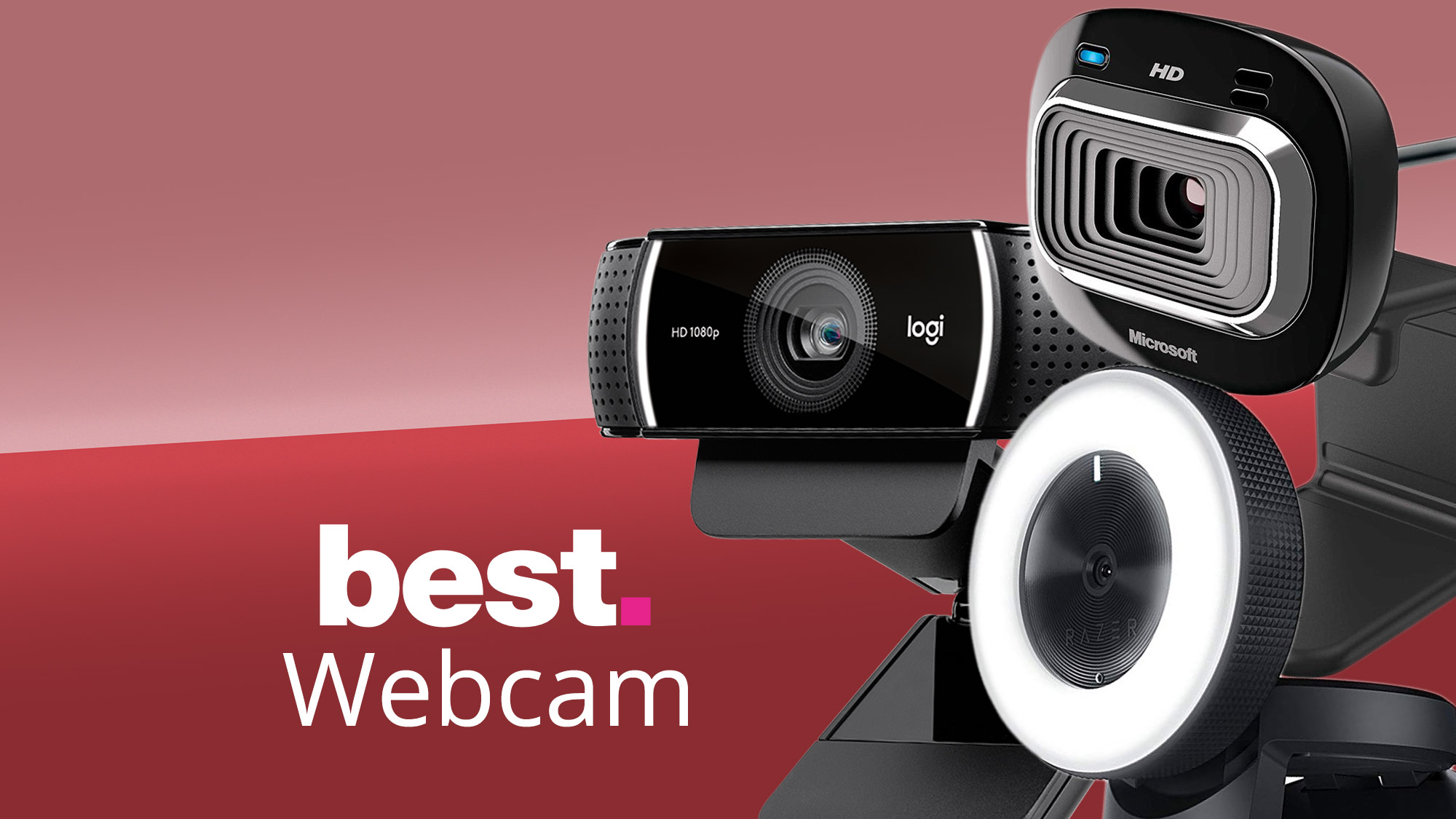 The best webcams are having another moment. Webcams are some of the most vital tools of the trade, especially for business calls and video conferencing with clients and colleagues, as well as producing YouTube. But, with more and more people working from home or connecting with loved ones from far away, these peripherals are in demand again.

While the laptops or all-in-one PCs already come equipped with decent webcams built-in, the desktop users out there need to buy theirs separately. Since there are plenty out there, we made a list of the best webcams 2020 has to offer, complete with a variety of models to choose from. Some come with 4K resolution or a high-quality mic while others can swivel around 360 degrees.

With our help, you’ll find an ideal webcam to fit your needs, whether you’re a content creator, a YouTuber or simply a remote worker who needs to be in touch with your team. We’ve listed the best webcams that are still in stock first, and then our usual best webcam list is underneath.

720p resolution not good for videos

These days, webcams are in high demand with so many people temporarily working from home. Not only is it hard to find the best ones in stock, but you wouldn’t want to spend a lot of money on something you’d only use for a little while. For something cheap, we’d go with the Logitech C270. Despite its 720p resolution, which honestly is good enough for video conferencing and hanging out with friends and family on Zoom, this little webcam that could is a bestseller and has received plenty of positive reviews. It’s also easy to set up – just plug and play, and most instant messaging and video chat apps will detect it automatically – so it’s perfect for those who aren’t technology savvy.

A pro camera for pro people

It isn’t the most attractive webcam, but the LifeCam Studio isn’t really designed to be attractive. Instead, it’s made for business conferencing and presentations, with its 1080p recording, 720p live video calling and wideband mic to deliver crystal clear sound. This is a serious peripheral – one that requires a powerful PC for max settings – but that doesn’t mean it’s lacking bells and whistles. For instance, it comes with 360-degree rotating capabilities and Microsoft’s TrueColor system, which will shift the exposure dynamically to keep you well lit.

Not the cheapest out there

Lenovo may be better known for its laptops, but it makes nifty webcams too. If you’re willing to shell out just a bit more, the Lenovo 500 FHD Webcam is actually not too bad, price-wise, considering its plethora of features. That includes a 75° wide angle lens, pan and tilting capabilities up to 360°, a facial recognition feature for Windows Hello login, and a privacy shutter because you never know who’s watching when you’re away from your desk. Plus, you don’t have to mount it on your laptop or display if you don’t want to. Those are some mighty features for a webcam that’s less than $100. With it, you’ve basically just upgraded your PC with some cool new features. What’s even better is that they’re available right now.

Our top pick for the best webcams is more than just a webcam. The Logitech StreamCam won’t just have your back when you’re video conferencing, video chatting with families and friends, and live streaming your games. This feature-rich 1080p webcam has many tools to offer for your content creation needs as well, including auto-focusing, smart exposure, facial tracking, up to 60fps frame rate, and a flippable design so you can take photos and videos in 9:16 format. You can even mount it on a tripod, and it uses USB Type-C for fast and more efficient video transfer speeds.

Cheap, cheerful and ideal for Skype

The Microsoft LifeCam Studio is one of the best webcams out there. Aimed at pro users with large displays, it features a familiar configuration of 1080p recording and 720p live video calling. It rotates 360 degrees, and can be mounted on a tripod with autofocus. The wideband mic delivers crystal clear audio, and Microsoft’s TrueColor system will shift the exposure dynamically to keep you well lit, making it a great choice for business conferencing and presentations.

A spotlight on streaming

The Razer Kiyo might look weird, a testament to Razer’s unique designs, but it’s still one of the best webcams out there for streaming – which is unbelievably popular in this day and age. With the Razer Kiyo, Razer has stripped away a lot of the bells and whistles that more premium webcams offer, focusing instead on what matters most to game streamers and YouTube vloggers – good image quality and lighting through a “Light Ring”. You don’t need to spend a ton of time configuring the stream – just plug in the Razer Kiyo and get to work.

The Logitech G922 Pro Stream features the same classy design as its predecessor, the C920, but it’s especially interesting for gamers this time around. The C922 still boasts excellent 1080p video quality, great for hosting video calls, and its automatic low-light correction makes it a fantastic cam for streaming with the lights off. It also supports background removal, making it ideal for budding YouTubers.

Should you buy the Logitech G922 Pro Stream?

Livestreaming on the go

Compatible with variety of devices

If you’re an aspiring journalist, or even if you’re just trying to capture footage in the wild, Mevo might be one of the best webcams for you. Either the Mevo or Mevo Plus will allow you to capture footage live, no matter where you are in the world – as long as you can connect to a mobile network. Plus, because Mevo is small and inconspicuous, it won’t distract your subject during an interview.

A pro camera for pro people

It isn’t the most attractive webcam, but the LifeCam Studio isn’t really designed to be attractive. Instead, it’s made for business conferencing and presentations, with its 1080p recording, 720p live video calling and wideband mic to deliver crystal clear sound. This is a serious peripheral – one that requires a powerful PC for max settings – but that doesn’t mean it’s lacking bells and whistles. For instance, it comes with 360-degree rotating capabilities and Microsoft’s TrueColor system, which will shift the exposure dynamically to keep you well lit.

Bringing 4K to a webcam near you

Maybe a little too high-res

Have you ever looked at a webcam in disgust because it just can’t hold up to your smartphone? Well, the Logitech Brio might be the webcam you’ve been looking for. With a 4K UHD resolution and HDR, the Logitech Brio has brought high fidelity to the world of the best webcams. If that wasn’t enough, it also boasts Windows Hello functionality and an easy to use stand, which will let you position it to capture your best side.

The Webcam of the future

Creative may not be the first company that comes to mind when you’re in the market for the best webcams, but with the Creative Labs Senz3D, that’s clearly changed. This space-age webcam has more features than you can imagine, and the high-tech 3D scanner and facial tracking tech promises to lead to some intriguing things in both AR functionality and even gaming. It isn’t exactly cheap, but you’re getting all the bells and whistles with this offering from Creative.

It costs a lot, but it does a lot too

The 920 comes very close for a lot less cash

The C930e claims to be Logitech’s most advanced HD webcam yet, so it isn’t surprising that it’s also one of Logitech’s most expensive offerings. However, unlike traditional webcams, which rely on the PC for all the heavy lifting, this unit does the video encoding itself, which should in turn result in better video quality. The wide, 90-degree field of view means it’s well-suited to business video conferencing and presentations. And of course, it’s Skype-certified for PC and Mac.

Probably not made of titanium

If you’re looking for a full HD webcam without that hefty price tag, this may be one of the best webcams for you. Boasting resolutions of up to 1080p HD while supporting 12MP stills, a noise-cancelling microphone and low-light compensation, this camera is feature-rich. There’s no autofocus, and you don’t get a big bundle of software, but that bargain price more than makes up for any shortcomings, which is why it’s earned a place on our best webcams list.

Bill Thomas has also contributed to this article