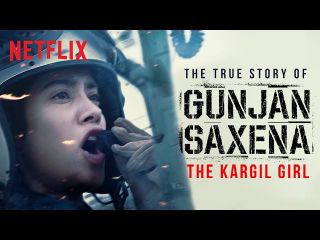 Though no dates were mentioned in the statement from Netflix, the streaming service shared a video of Gunjan Saxena, one of the first two Indian women to fly in a combat zone during the 1999 Kargil conflict with Pakistan.

In May, Amazon Prime Video had announced that the Amitabh Bachchan-Ayushmaan Khurrana movie ‘Gulabo Sitabo’ would be among seven movies across four languages to be premiered on the streaming platform. Of these, Tamil movie ‘Ponmagal Vandhal’ premiered on May 29 while ‘Gulabo Sitabo’ is slated for release on June 12 (Friday).

The movie has Janhvi Kapoor playing the title role of Gunjan Saxena while Pankaj Tripathi plays her father and Angad Bedi her brother. Others in the cast include Viineet Kumar, Manav Vij and Ayesha Raza. The movie, directed by debutant director Sharan Sharma is produced by Karan Johar’s Dharma Productions along with Zee Studios.

Netflix and Dharma Productions have partnered to release movies directly on the platform. Their previous collaborations include Drive featuring Sushant Singh Rajput and Jacqueline Fernandez and the more recent Kiara Advani film Guilty which featured a story around the the #MeToo movement.

Who is Flight Lieutenant Gunjan Saxena?

Flight Lieutenant Gunjan Saxena joined the Indian Air Force and made history during the Kargil battle in 1999 when, as a flying officer, she flew rescue missions to airlift wounded soldiers in her Cheetah aircraft. The IAF pilot had a close shave when an enemy missile missed her chopper and exploded right behind. She was honoured with the Shaurya Chakra for her bravery. Saxena was one among two women who flew missions in 1999. It is not clear whether Srividya Rajan’s character is also part of this movie.

In the video, we have Janhvi Kapoor narrating the story of Gunjan Saxena who wanted to grow up and become a pilot in a world where people believed that women can’t even drive cars. This is when her father, also part of the defence forces, convinces her that whether a man or a woman flies a plane, they are called pilots.

In a statement, the movie’s producer Karan Johar described Gunjan Saxena: The Kargil Girl as a defining movie based on a true story of a woman who has inspired others. “We are excited to partner with Netflix and share this fearless story about following your heart and dreams with millions around the world.”

This is one of the many films that were originally scheduled for theatrical release but have opted for digital release. However, with India entering into the Unlock phase since Monday, it would be interesting to see whether other production houses follow suit or prefer to wait it out till cinema theatres are given the go-ahead to open.

At this point, while malls and temples have opened in some states with stricter social distancing norms, cinema houses have been kept shut given that the risk of closer contact may result in the spread of the virus.