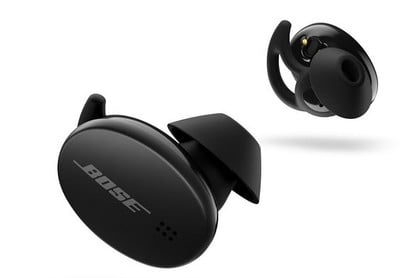 The world of true wireless earbuds is expanding all the time, and Bose is the latest audio brand rumored to be bringing out a new pair in the near future.

The so-called Bose Noise Cancelling Earbuds 700 are said to be the company’s first  true wireless earbuds with ANC, and could compete with the likes of the AirPods Pro and the Sony WF-1000XM3.

The pre-release version of the new wireless earbuds were apparently revealed in an unboxing video by Josh Quill, which has given us a good look at the Bose NC Earbuds 700 and suggests that a release date could be coming soon.

Even though the box in the video says ‘QuietComfort earbuds’, these aren’t thought to be part of the QuietComfort range – so it looks like most of our information comes from a pre-production version of the Bose Noise Cancelling Earbuds 700.

Bose actually announced the new earbuds earlier this year, but the leaked video is the first time we’ve seen them in the flesh.

At the time, Bose said that the Noise Cancelling Earbuds 700 are a “truly wireless in-ear headphone with truly astonishing noise cancelling”, that will come with touch controls and support for virtual assistants like Google Assistant, Siri, and Alexa.

It makes sense that Bose would seek to join Apple and Sony in releasing a pair of true wireless earbuds with ANC; after all, the Bose Noise Cancelling Headphones 700 are among the best noise-cancelling headphones you can buy in 2020, and the brand has a long history in the field with its QuietComfort range of cans.

Here’s everything we know so far about the Bose Earbuds 700, as well as a few features we’d like to see from the rumored wireless in-ear headphones.

When Bose first announced the Noise Cancelling Earbuds 700, it said that they would launch in late 2020 – and a recently leaked unboxing video gives a pretty good indication that the Bose NC Earbuds 700 are at least nearly ready for production.

We wouldn’t be surprised if the wireless earbuds were launched between September and November, allowing Bose to take aim at shoppers in the run up to Christmas – still, nothing is confirmed, so we’ll have to wait and see.

Bose hasn’t confirmed a price, but we can hazard a guess as to the cost of the Bose NC Earbuds 700 based on past models.

The brand’s previous true wireless earbuds, the Bose Soundsport Free, cost $200 / £180 / AU$300, so we’d expect a new model to be released at a similar price point.

Saying that, if these buds come with active noise cancellation built-in, that price could be bumped up to be more in line with the Apple AirPods Pro and the Sony WF-1000XM3. In any case, we’re not expecting them to be cheap.

Thanks to that leaked unboxing video, we know a fair amount about the design of the Bose Noise Cancelling Earbuds 700 – although it’s worth bearing in mind that, as a pre-production model, the design could change somewhat before these buds are released.

The video shows a pair of black true wireless earbuds with oval-shaped outer housings that sport the Bose logo in gray. With silicone eartips and small earfins , the Bose Noise Cancelling Earbuds 700 should provide a strong seal against the ear canal, while staying snugly in place, possibly making them suitable for working out. Judging from the video, it looks like you get a number of different eartips and fins in the box, including a pair of larger earhooks, so you should be able to find a decent fit for your ears.

In fact, the back of the box says that the earbuds are “sweat and weather resistant”, though there’s no official IPX waterproof rating to be seen at this stage. We’d hope to see an IPX4 rating at the very least if the Bose NC Earbuds 700 are to double up as running headphones.

Earlier this year, when Bose first announced the new earbuds, it said that they’ll come with “intuitive touch controls”, so we imagine those housings are touch-sensitive.

The buds are housed within an ovaloid USB-C charging case, which features a row of LEDS on the front to give you an indication of remaining battery life – the case can also be charged wirelessly with a Qi-certified charging mat, according to the back of the box. Unusually, there’s a Bluetooth button in the center of the case, which will presumably allow you to pair the earbuds with your device before you remove them from the case.

The case should be pretty secure – it seems to be held shut via a mechanical latch, rather than the magnetic clasps we’re used to seeing with true wireless earbuds today.

According to the box seen in the leaked video, battery life won’t be that impressive. There are six hours of juice contained within the buds themselves, while the charging case contains an additional 12 hours of battery.

At 18 hours in total, the Bose NC Earbuds 700 wouldn’t even live up to the mediocre battery life offered by the Apple AirPods, let alone the stellar staying power of models like the Lypertek Tevi.

Here’s hoping that battery life is a typo or a placeholder, to be updated when the buds are officially launched.

Bose says that the Noise Cancelling Earbuds 700  will “deliver noise cancelling that’s comparable to our most powerful banded headphones” – and if they can live up to the Bose Noise Cancelling Headphones 700 and the Bose QuietComfort 35 II, they’ll be very powerful indeed.

The back of the box seen in the unboxing video says that the new earbuds deliver “superior noise cancelling”, as well as a Transparency mode, that will presumably allow environmental sound to pass through the buds when you need to quickly tap into your surroundings – much like the AirPods Pro.

We’d like to see the same noise cancellation technology utilized by the Bose Noise Cancelling Headphones 700, which block out environmental noise – and even do so during phone calls, so whoever you’re talking to will be able to hear you loud and clear.

When it comes to blocking out environmental sound, there are 11 different levels of noise cancellation to choose from – giving you a flexibility we’d love to see again with the Bose Earbuds 700.

The box boasts “immersive sound at any volume”, which doesn’t tell us much about the sound quality we can expect from the Bose Earbuds 700; there’s no mention of the type of drivers used, their frequency range, or any other concrete specs.

However, ‘immersive sound’ could refer to support for spatial audio codecs like Dolby Music – a feature that’s coming to the AirPods Pro when iOS 14 launches in September / October. At the very least, we’re hoping for a wide soundstage, with well-balanced high, mid, and low frequencies – just like the Bose SoundSport Free.

In any case, we’re expecting good things when it comes to the audio quality. Bose has a great reputation in the world of audio, and particularly in noise-cancelling headphones, so we can’t wait to see how this translates to a new form factor.

What about the Bose Earbuds 500?

Bose has also promised “a smaller and sleeker version” of the SoundSport Free earbuds, called the Bose Earbuds 500.

It doesn’t sound as though the audio quality will be drastically improved, as Bose has said they’ll deliver the “audio performance, comfort, and stability” its older buds are known for.

However, a couple of new features slated for release include “intuitive touch controls and access to your choice of the Google Assistant or Amazon Alexa”.

The Bose Earbuds 500 will likely be cheaper than the Bose Noise Cancelling Earbuds 700, as they won’t come with active noise cancellation, much like the noise-cancelling AirPods Pro are more expensive than the regular AirPods.

Again, these buds are said to be launching in late 2020, just in time for the holidays. If you can’t wait until then, these are the best true wireless earbud deals we’ve found today: