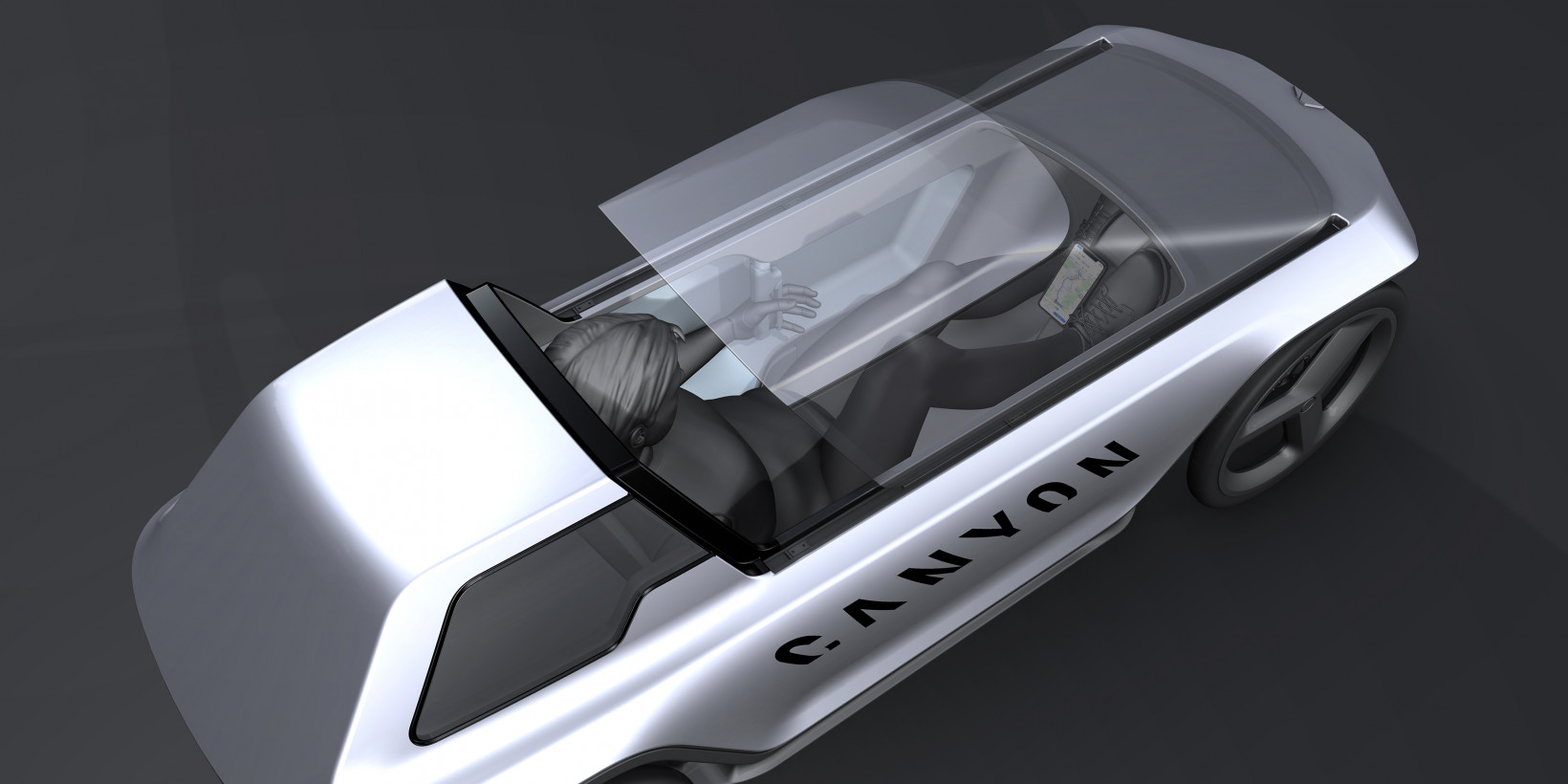 Some vehicles of our near future appear to be more certain to succeed than others. Ebikes and electric cars are carving themselves a niche as transport options that are more sustainable than outgoing fossil fuel based alternatives.

Escooter sharing schemes are having a moment, too. It’s too soon to tell how they’ll pan out, but the schemes were recently fast-tracked to British streets to offer socially distanced mobility options amid the coronavirus pandemic.

[Read: The confusing but cute 3 wheel Solo EV is finally in production]

All of these options still come with compromises. Cars are massive and aren’t a great option for traveling through the busy cities. Smaller, more agile, ebikes are great for transporting people, but leave a lot to be desired in sour weather or when you have lots of luggage.

There seems to be an opportunity for someone to come along and fill the gap between cars and bikes — Canyon, the online only direct-to-consumer bike maker based in Germany, agrees.

Today Canyon announced its “Future Mobility Concept,” its dream to shake up the mobility market with its “podbike” vehicle that looks as if Sir Clive Sinclair wrote an episode of the Jetsons.

Many of the details are yet to be fleshed out fully, and after speaking with Canyon’s CEO and founder Roman Arnold, it was clear to me that the company is pragmatically aware of the distance it has to cover before its urban mobility “podbike” concept can become a reality.

“It is a concept right now, but a clear statement of intent,” Arnold told me. Canyon is specifically targeting customers that want to travel sustainably year round and want to show it too.

While Canyon’s idea might seem kind of zany, in effect, they’re reimagining a fully-faired recumbent as an all-electric micro-car for the city — but with a few important changes.

Fully faired recumbent bicycles aren’t fully sealed from the elements. Despite some bodywork, many have holes on the underside where the pedals and wheels are.

Recumbent bikes are also, generally speaking, powered entirely by the human who pilots them. There are some electrically assisted models, but these are just ebike versions of standard recumbents and are still subject to speed limitations and vehicle licensing regulations. This makes them quite scary to ride amongst fast moving traffic that’s hard to keep up with.

Canyon’s mobility concept however edges slightly closer to being a car than a bike, and the company is speaking with carmakers to produce its chassis. Despite this, Arnold still refers to it as a “concept bike” rather than a car, as it’s born from a cyclist‘s mindset.

Unlike a bike, the podbike’s pedals won’t be directly connected to the wheels, instead the car-bike’s propulsion comes from electric motors — the rider must always be pedaling for the vehicle to move, though. This means that it can travel at speeds of up to 60 kph and cover 150 km per charge. You charge it at home from a mains plug, like an electric car.

The human pedaling inside the cabin also serves as a fleshy generator that can either provide additional power to the vehicle or increase its range by charging the batteries, depending on the mode the vehicle is traveling in.

The concept vehicle can function in two modes, one capable of traveling at up to 60 kph and another which is limited to 25 kph. If future regulations and infrastructure allow – and that’s a big if — the podbike could drive on regular highways and mix it amongst regular traffic at high speed, and then switch to its slower mode and drive on bike paths, all the while producing no emissions.

While the concept would serve commuters who have to travel further than is realistic on an ebike, it is also designed for practicality. Arnold told me that many of Canyon’s product concepts over the years have been motivated by what the company’s employees want to solve a practical problem, and the podbike is no different.

With this car-bike concept, he says the company wants to make a vehicle that can be used year round. No one will argue that cycling in the rain and cold is a miserable experience, but with Canyon’s concept that will be a thing of the past — thanks to it being fully enclosed and sealed from the elements.

You can pop the top forward too if you want a bit of wind in your hair, or some fresh air into the cabin on a nice day. There will also be a heater for the winter months and to prevent the windows from fogging up.

Adding an extra ounce of versatility is the luggage space behind the driver. Canyon says this is big enough for a child or a few boxes.

The most alluring point is the podbike shouldn’t be too expensive either. If it’s to fit into the market between ebikes and cars, it has to come in at a realistic price point. Canyon says it’s aiming for “somewhere below the €7,000 mark.” Making it a bit more expensive than a premium ebike, but still cheaper than a small car. The company will also offer it on payment schemes to make it even more affordable.

The German bike maker hopes this blend of practicality, versatility, and affordability will be enough to bridge the chasm between cars and bikes, a space which has been challenged by a handful of concepts over the years, none of which have ever stuck.

As I’ve mentioned, fully faired recumbent bikes are nothing new. There’s a Dutch company called Velomobiel that’s well known in the human-powered vehicle world for its car-like recumbent bikes. But outside of Holland, you’ll almost never see these things on the road.

Back in the 1980s, there was the Sinclair C5, a pedal-assisted electric vehicle that despite much fuss at the time, never really took off. It’s creator, Sir Clive Sinclair, projected 100,000 sales in its first year, but the company only managed to make 14,000 and sell 5,000 of them before going bust.

Reviewers of the C5 criticized it for being open to the elements, having limited range, being slower than a conventional bike, and so low to the ground that it became a terrifying self-propelled open-top coffin when ridden in traffic.

In part, it was also massively ahead of its time. By the time it launched in 1985, the UK had just about recovered from the oil crisis of the 1970s and the country was not as acutely aware of the climate crisis as it is today. When it was released, there was no real need for such a vehicle, but today, there is.

Thankfully, Canyon has addressed all the main ailments that blighted previous attempts to create a vehicle that sits somewhere between being a bicycle and a car, and the timing is better than it’s ever been.

In fact, Arnold told me that Canyon has been toying with the idea of an enclosed car-come-bike for a while. However, with the coronavirus pandemic encouraging people to explore more sustainable forms of personal transport, the company is fast-tracking the idea and trying to bring it to life sooner.

For this to be a global reality two things need to happen: regulators need to get on board and ensure it’s supported from a vehicle licensing point of view, and infrastructure needs to develop to support it.

All things being well, the German bike-maker says that it could have the first models in testing in the next three years, and could even make it to market within five years. Arnold says Canyon will begin testing its podbike in its hometown of Koblenz, Germany. Beyond there, it really depends on what countries are most receptive of the idea.

The company has a solid track record when it comes to keeping up with the times and adapting to the market, so we shouldn’t chalk up the podbike as just a concept. Canyon is no stranger to staying ahead of the curve.

In the mid-1990s, the company pivoted to an online sales modeil and made it through the dot-com boom and has posted a consistent 20% growth year-on-year ever since. The company is expecting to generate €1 billion in revenue by 2025, so while it’s forward thinking enough to come up with ideas like the podbike, it should also be able to financially support its development.

Despite other similar ideas failing in the past, Canyon is taking a more considered approach to crete a vehicle that offers more versatility than a car, and more comfort and practicality than an ebike. We just need to hope this idea resonates with the right group of people for it to actually become A Thing.