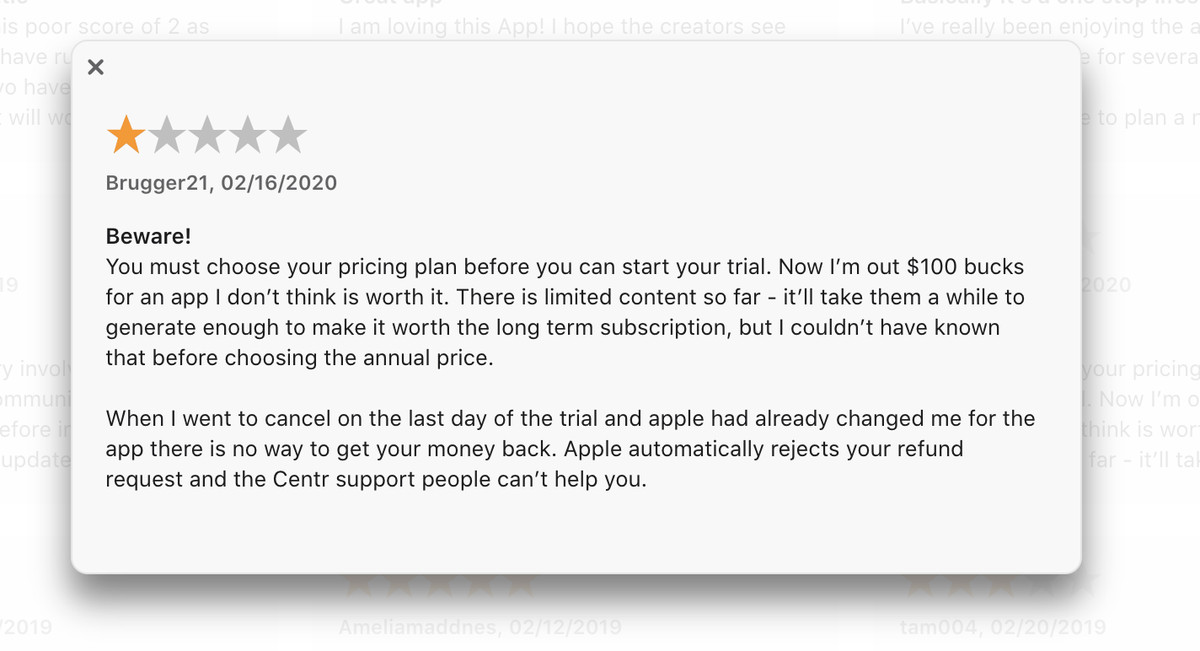 Multiple people say Chris Hemsworth’s workout app, Centr, charged them up to a $99 or more subscription fee without warning, even after they attempted to cancel a free trial. The app has been flooded with complaints across Instagram, Facebook, and app stores, with users calling the company “sneaky” and a “scam” and demanding refunds.

Multiple fitness apps have offered free trials during the COVID-19 pandemic, and known good-body-haver and app founder Chris Hemsworth did the same with his Centr fitness app, offering new users a free, six-week trial they could cancel at any time. The app, which launched in February 2019, combines fitness with meditation and meal planning. It ended up being something not everyone wanted, only using it a few times, and many attempted to cancel the pricey subscription, especially because they aren’t currently able to spend money outside their essential needs.

Jacqueline Cabrera, a UX student, says she thinks the app is using a “dark pattern” to keep people subscribed. She ended up being charged $99 for a discounted yearly subscription, even though she canceled ahead of her trial running out. She says she removed and canceled her account the day after signing up. She’s a freelancer and student in Guatemala, and the $99 represents a third of her monthly salary.

“I literally was devastated,” she says. “I was saving money to pay for an online course that I wanted to do, and I almost had it all when they took my money away from my bank account. Now I have to start all over again.”

She says she might try to sell her subscription to a friend for half price to at least recoup some of her cash.

Another user, Juliette Dumay, says she canceled her account ahead of her trial running out, but then was charged as if it had never happened. The app didn’t even send her a receipt of the charge, she only noticed because she checked her bank account. In subsequent emails with the company, the team eventually refunded her, but said she didn’t “successfully set her account to cancel” until after she was charged. This suggests that she did cancel, like she says, but didn’t follow the proper channels to do so, so it didn’t register.

Other people admit they didn’t cancel ahead of their six-week trial ending, but that they weren’t given any heads-up about their trial running out, and the company won’t refund them. The subscription automatically renews at the end of the trial, so long as users don’t cancel it ahead of time. One user, who preferred to remain anonymous, says he was able to at least negotiate his yearly subscription down to only a one-month charge and effectively canceled the recurring charge.

“I fortunately got a majority of my money back following a lot of emails, but yes, I was charged once the trial ended after one days use,” he says over Instagram DM.

Centr began issuing refunds yesterday, but it took many complaints on Facebook, Instagram, and in the app’s reviews in the App Store and Google Play for it to happen. (Most of the reviews were filed in the last week, which lines up to six weeks from when the team first offered the free trial.) Centr’s social media team has also since deleted the negative Instagram comments.

We’ve reached out to Centr for comment and will update if we hear back.