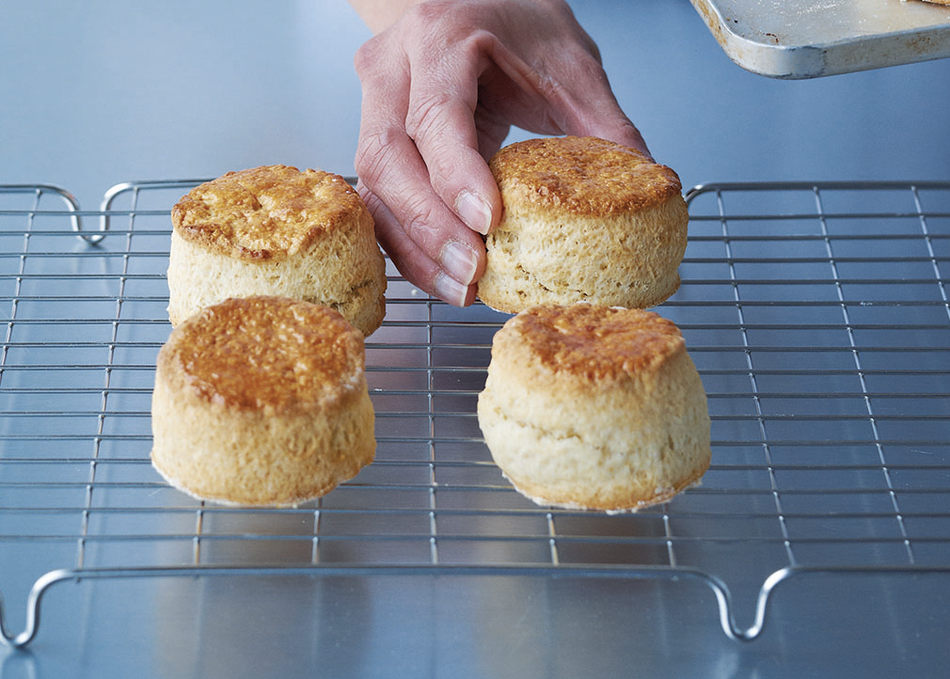 Baking is good for the soul.

Whenever things get a bit much, I take a break from whatever I’m doing and grab a baking bowl and make a batch of cheese scones. They take about 20 minutes to bake and when they’re done, I eat them hot out of the oven, slathered in a very generous helping of hot, melted butter.

Whenever my brain needs a break from the never-ending stream of worry and stress, baking is the only occupation that fully diverts my mind. An obvious major plus-side is that you end up with a delicious thing to eat at the end of it all.

Not only that, you also get the sweet sense of achievement of having created something with your own two hands. It’s basically a win-win situation.

They melt in your mouth, as already mentioned, they’re at their most delicious when smothered in melted butter, and they’re super easy to make. I am, of course, talking about the humble cheese scone. This recipe by Leiths School of Food and Wine — a UK cookery school founded by Bake Off judge Prue Leith and author Caroline Waldegrave — makes six scones.

Preheat the oven to 220°C/425°F/gas mark 7. Flour a baking sheet. Sift the flour with the salt into a large bowl. Rub in the butter until the mixture resembles breadcrumbs. Stir in the cheese. Make a deep well in the flour, pour in the milk, and mix to a soft, spongy dough with a knife.

On a floured surface, knead the dough very lightly until it is just smooth. Roll or press out about 2.5cm/1in thick and stamp into rounds with a small pastry cutter. Brush the scones with beaten egg for a glossy crust, sprinkle with flour for a soft one or brush with milk for a light gloss and soft crust.

Bake the scones at the top of the preheated oven for seven minutes, or until well risen and brown. Leave to cool on a wire rack, or serve hot from the oven.

Brownies are basically heaven-sent. Here’s a decadent brownie recipe by Thomasina Miers, co-founder of Wahaca restaurant group. “This sophisticated, crater-like, deeply chocolatey cake, with the merest hint of cinnamon and a generous scrunch of sea salt, is so popular amongst my friends that it comes out at almost any opportunity,” says Miers. “I stole the recipe from a friend of my parents when I was eight (which gives you an idea of how easy it is).”

Grease and line the base of a rectangular brownie tin. Melt the butter in a medium pan over a low heat; once melted stir in the chocolate, being careful not to burn it. When the mixture becomes a smooth velvet, add the sugar, salt and cinnamon. Stir until the sugar has melted and then slowly sift in the flour, stirring to combine. Beat the eggs, then beat into the chocolate mixture bit by bit until fully incorporated. Pour into the prepared tin and bake in the oven for 30-40 minutes until the outside is dark and delicious looking and a skewer comes out just clean. Leave to cool in the cake tin for 15 minutes before turning out and cooling on a wire rack.

Meanwhile chop up the Mars bars and melt with the milk, syrup, dark chocolate and 50ml of the double cream. Pour over the Mars bar sauce and scatter the chopped Flakes over the surface of the cake. Serve with a scoop of your favourite ice cream.

If you’re a baking novice, fear not. This recipe is a good introduction if you have limited experience.

“This recipe’s simplicity makes it a perfect introduction to baking for anyone with limited equipment, ingredients and/or experience,” says Kerry Connolly, founder of Willow & Greene — a gardening and cookery school in Northern Ireland. “It was handed down by my mum 25 years ago and I’ve been using it in Home Economics classes ever since.”

This recipe makes a 1lb loaf and six muffins.

Use the yoghurt carton to measure the ingredients (no weighing scales required), then bung everything into a large mixing bowl and mix using a hand mixer for three minutes until the batter is well combined.

Grease and line a small loaf tin and or muffin cases and pour in the cake batter until three quarters full. Bake at 180°F. Large muffins take 15-20 mins and a 1lb loaf will take 30-40 mins. Test the top of the cake with your index finger and when it springs back it is cooked. Remove from the oven and cool in the tin. It tastes like a Madeira cake and can be eaten on its own, with butter or warmed and served with fresh berries and sour cream.

Feel free to play around with the ingredients and use what is available in your lockdown larder — most flavours of yoghurt will work well, as will any flavourless oil. Boost the flavour by adding an extract like vanilla, pineapple or freshly zested orange or lemon.

Chocolate and orange are a flavour match made in heaven. This recipe for orange and chocolate chunk cookies comes from Leiths School of Food and Wine makes 16 cookies.

Heat the oven to 180’C/gas mark 4. Line 2 baking trays with baking parchment. Chop 125g of the chocolate into small pieces and chop the remaining 125g roughly. Roughly chop the marmalade. Sift the flour and cocoa powder together into a bowl.

Cream the butter and sugar together in a medium bowl, using a wooden spoon, until pale and fluffy. Do not over-beat the mixture or you will incorporate too much air which will make the cookie dough very soft and likely to spread during baking. Place the half finely chopped chocolate in a small bowl set over, not in, a saucepan of simmering water. Stir the melted chocolate into the creamed butter mixture. Add the marmalade, roughly chopped chocolate, flour and cocoa mixture to the bowl along with the orange zest and stir everything together until well combined. The dough should be quite firm.

Divide the dough into 16 equal portions and, with lightly floured hands, shape each piece into a ball and arrange them on the baking sheets and press into flattish rounds, using your fingertips. Chill the cookies for 15 minutes before baking.

Bake in the centre of the oven for 10-15 minutes, or until dry to the touch. Remove the cookies from the oven and leave to cool on the baking sheets for 5 minutes then transfer to a cooling rack to get completely cold.

In a large bowl, add the flour and salt. Stir to combine. Now add the water and yogurt, mix thoroughly to combine and then transfer to a floured board. Knead for a few minutes until you get a springy dough. Heat a large griddle pan or frying pan to medium. Divide the dough into four, then roll out the first flatbread. Pop it on the griddle pan and allow to cook and char a little on that side then flip to cook to on the other side. Repeat. Keep the flatbreads warm on a plate covered with a clean cloth.

Sourdough is having a moment right now. So much so that it’d be remiss of us not to include a sourdough recipe. This one comes courtesy of Aidan Monks, founder of Lovingly Artisan bakery, who’s just been named national baker of the year in the UK for the second year in a row.

Though sourdough has a reputation for being a little tricky, there’s a handy way for novices to make things a little easier: Pop it in a tin.

“The sourdough method of making bread is often a challenge for any baker trying it for the first time. Free form bloomers and cobs make that even more challenging,” says Monks. “If your dough-making skills are still under development, a tin will hold it together for you, especially during proving and baking when it can all go a little pear-shaped.”

According to Monks, the shape of the bread also makes it easier to cut. Win win!

Make the leaven 24 hours beforehand by mixing together the mother, flour, and warm water in a clean jam jar. Place the lid loosely on top and leave at room temperature 21-25°C for 24 hours.

To make the dough place the water and leaven into a mixing bowl and stir together till mixed. Now add the flour and with a scraper mix together taking care to scrape down the sides of the bowl at regular intervals until you get a smooth dough with no lumps. (You are only mixing the ingredients together at this point, the kneading comes later.) Now cover the bowl with a damp cloth and leave to stand for two hours to autolysis. This time allows the natural enzymes in the flour to activate and make the job of kneading a lot easier.

Now add the salt and use your fingers to break the dough apart and allow the salt to mix evenly throughout the dough. Kneading or more to be more descriptive stretching the dough. Firstly, dip your hands into a jug of warm water. Then push your fingers between the bowl and the dough, and grasp the dough pulling it upwards, feeling it stretch and tension. Then fold that stretched dough down towards the opposite side of the bowl.

Turn the bowl slightly and repeat that process till you work your way around the bowl, doing this several times until you feel the dough start to tighten. Cover the bowl with the damp cloth and leave for 30 minutes. After 30 minutes has elapsed, repeat the process and repeat another four times. You should now have a smooth silky dough. Cover and leave for two hours to ferment and grow.

After two hours, your dough should feel lighter to the touch and have more volume. It’s time to shape the dough for the tin. First lightly grease the bread tin with oil. Then use your scraper to remove the dough very carefully from the bowl onto a lightly floured work surface. Gently flatten the dough with your flattened hand. Looking at the dough fold in two sides to create a rectangle of dough. We now want to shape the dough like a Swiss roll.

Starting at one end, fold a small amount of dough over to create a tight little fold that will become the centre roll. Each time you fold the dough think about stretching the dough and keeping it as tight as possible. When you have finished creating your little swiss roll of dough, drop into the tin seam downwards.

Prove your tin loaf till the dough sits just above the rim of the tin. Bake in a preheated oven at 180°C for 40 to 45 minutes. Once cooked remove from the oven and turn out onto a wire tray to cool.