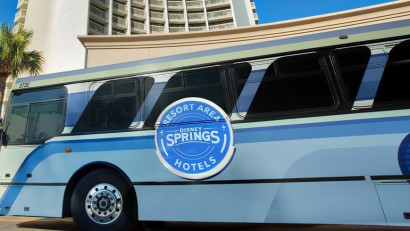 Florida has begun rolling back its social distancing restrictions that were initially put in place in early April in response to the spread of the novel coronavirus. While the state is still limiting the full range of businesses and spaces that can be made available to the public, the Walt Disney Company is taking advantage of the rollback in order to reopen its Disney Springs location.

In a recent blog post, Disney Parks announced that it plans to reopen Disney Springs, an outdoor complex located within the Walt Disney Resort where people can patronize different shops and restaurants. When the complex comes back on May 20, the company said it’ll be in a somewhat limited capacity out of a desire to protect the health of guests and Disney employees. The post reads, “During the initial opening phase, Disney Springs will have limitations on capacity, parking and operating hours.”

“As we continue to monitor conditions, and with the health of guests and Disney cast members at the forefront of our planning, we are making several operational changes.,” it continues. “Disney Springs will begin to reopen in a way that incorporates enhanced safety measures, including increased cleaning procedures, the use of appropriate face coverings by both cast members and guests, limited-contact guest services and additional safety training for cast members.”

While the fact that the Resort as a whole will not be reopened and all guests and employees will be required to wear face masks are both good ideas on paper, inviting people to gather within the complex and eat and mill around stores still seems like something of a questionable choice, given that Florida hasn’t quite become a hotspot for coronavirus transmission.

It’s thought that part of the reason Florida wasn’t hit as hard by the pandemic as other states like New York and California is that a significant portion of the population followed the state’s orders to avoid public areas. Easing up the order to self-quarantine at a time when we still have very few effective means at full-on stopping the spread of the virus could, in theory, change things for Florida, which is a grim concept to contemplate. It’s the sort of thing we do have to consider given that we’re all living through a literal pandemic.

Disney’s announcements about the Springs location comes just as the Disneyland park in Shanghai will opened its doors and resume operation with similar safety measures put in place, in addition to testing guests’ temperatures. The way that China’s handled the pandemic up to this point is different than how the U.S. has, which is very important to bear in mind. Though there is still some uncertainty regarding the official number of infections that hit China, what seems to be largely clear is that the public health response both began much earlier and was much more widely adopted than in the U.S.

What’s also important to understand is that as more American businesses begin to reopen, there could be increased potential for people who were previously not infected by the virus to become exposed to it now, which could lead to a resurgence in places that were once thought to have been spared by the pandemic. All of this is to say that balancing the need to stamp the virus out along with businesses’ (especially massive corporations’) desire to get back to making money is complicated, especially in cases where large groups of people are likely to flock.

It’ll be interesting to see whether people actually feel comfortable enough to head back to Disney Springs to do some shopping and grab a bite to eat, because it’s one thing for people to leave their homes for a grocery store run, and something wholly different to walk into part of a resort—the bulk of which is still closed.