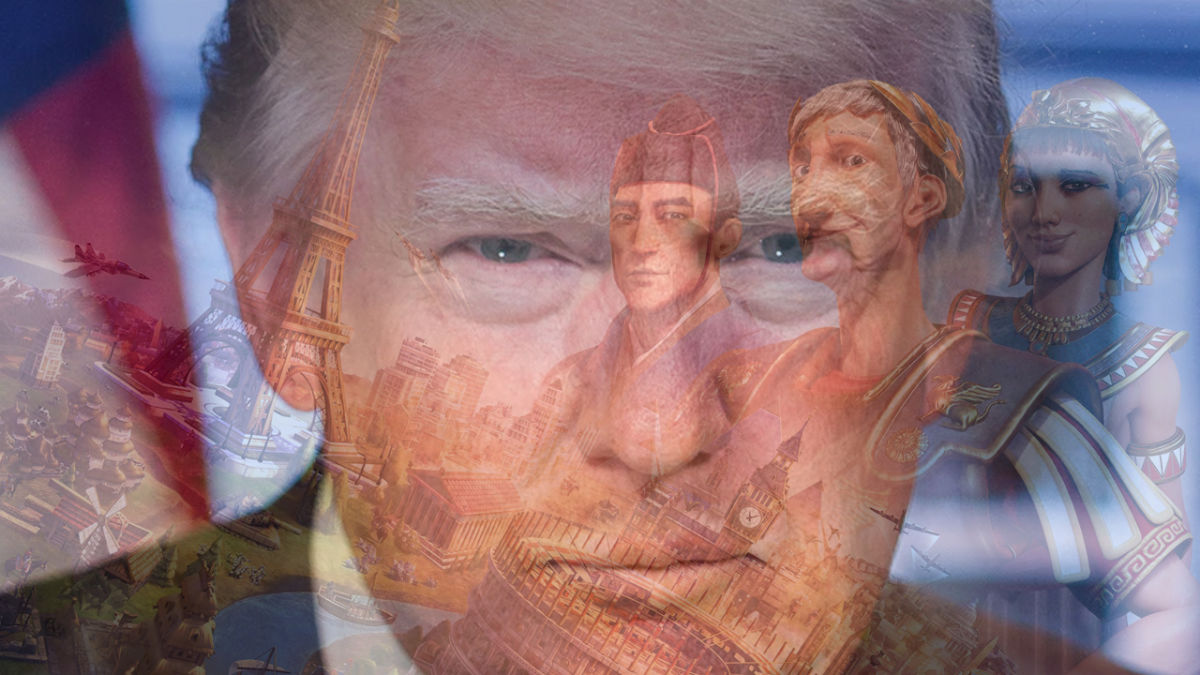 No matter which side of the aisle you’re on, you might agree many countries haven’t had the best response to the global pandemic. America is chief among them.

A virus is a virus, and there’s little any one person can do to manage an outbreak, but you can protect your people from its harshest effects, whether from the virus itself or the economic impact that’ll throw everything out of whack. But if you think you’re more capable of running a country under unforeseen, strenuous circumstances and limited provisions, prove it with these eight games.

When it comes to weathering dreadful storms, Civilization VI delivers in spades. This turn-based strategy game drops you in the middle of nowhere with a settler and their babysitters protectors. You’ll start off scoping out your area and planning your grand expansion with innocence, fighting off waves of barbarian assholes, and courting allies in hopes they don’t attack your weak little city before you’ve even named it.

Make it past turn 50, and all the nonsense begins. If you’re playing with both expansions—and you should be, they’re amazing—you’ll be dealing with tornadoes, droughts, river flooding, volcanic eruptions, and more. And that’s just the stuff mother nature throws at you. When Gandhi threatens to nuke everyone every other turn, you’ll be begging to work with your neighbors and keep the peace through tried-and-true diplomacy. (LOL, yeah, right.)

By the way: Even more destructive updates are headed to Civilizaiton VI, including an Apocalypse mode that’ll add forest fires and other new levels of destruction, as if you weren’t already inundated with the world’s problems.

Managing public health is an arduous task, but you can do it! I believe in you! This tycoon game is all about running your own hospital. Alongside administrative duties like balancing books and managing staff, you’ll monitor the health conditions of all the patients and prepare your hospital accordingly.

Two Point Hospital isn’t extremely ripe with depth, but it’s charming, fun, and there are enough patients and illnesses to keep you busy for hours.

So you haven’t burned down the hospital, and that’s great! But can you build and run an entire city? City builders like Skylines let you dabble in the world of urban planning, a genre of games that seem to share a common trait: Everyone sucks at driving, and it’ll cause 50% of the problems in your city. The other 50% is on you, Mr. or Ms. Mayor, because you’re the one who created the roads and the ensuing traffic nightmare!

After spending three hours building your roads just to funnel all seven billion of the world’s people through the same two-lane one-way, more residents and businesses will move in, and you’ll dedicate the rest of your digital mayoral life to cleaning up YUGE messes, all the while figuring out how to tax the hell out of your population without pissing them off. Those government oil spills don’t clean themselves up, after all!

The best part about Cities: Skylines is the sheer realism on display. Paradox included an in-game Twitter-like feed (it’s named Chirpy here) where citizens will either praise your genius or scream at you for everything wrong in their lives, with dozens of useless thoughts interspersed. There’s also the ability to play Big Brother with individual NPCs and follow them around as they handle the day’s business. Told ya’ it’s realistic! Make sure you pick up the Natural Disasters pack, too.

Think you can create the vaccine faster than Bill Gates? Prove it in Big Pharma, where you’ll oversee a pill production line for many diseases and illnesses. Start off with sketchy herbal supplements that claim to cure cancer without the FDA’s approval and work your way up to pandemic-busting vaccines. Your primary goal here isn’t to secure public health, but corporate profit. To some, those are two sides of the same fucked up coin.

Donald Trump’s Space Force hasn’t had the most inspiring of starts. (Unless you count that Starfleet logo they ripped off, which we do.) Recent news reports suggest an alien invasion is right around the corner, and you can already start working on your preparedness and response strategy in X-COM 2. This is one of the deepest turn-based tactics games out there, this planet or otherwise.

Between rescue and liberation excursions to the various locales the bug-eyed bastards invaded, you’ll also be working on building your research facility, using said facility to scope out new alien technologies, and recruiting the poor sods meant to test it all. If someone on your team dies, they’re gone for good, so your plan had better be solid.

So, here’s the thing about Plague Inc.: It’s a game about you creating the virus and seeing how much damage it can do around the world. Mixing antibodies and proteins in a petri dish seems innocent until that world map fills up with all the dots telling you how many deaths it’s caused. That’s a little counterproductive (and insensitive) to our cause here, but the game will soon get a free Save The World mode to fight the good fight.

In fact, its developer—Ndemic Creations—is working with the World Health Organization, the Global Outbreak Alert and Response Network, and other health institutions to make it more of an educational experience.

Plague Inc. is only a game, and it’ll take a lot more work than the push of a button to get through the real pandemic, but this update will make you feel a little better once you’ve single-handedly steered mankind from the brink of destruction.

Pandemic: The Board Game | PC, Xbox One, Switch, iOS, Android, The Actual Board Game

Like Plague Inc., Pandemic simulates the spread of infectious disease, but played in a board game setting where you have to move doctors and virologists around to collect the antibodies from sick people needed to cure the virus.

Alongside medical personnel, you’ll get quarantine specialists and crack researchers to help you deploy your own social distancing strategies, no embarrassing daily press briefings required. There’s no online multiplayer, but there is local co-op, so hop into a Zoom call with your buddies and form your own pandemic task force.

With all this experience under your belt, it’s time to prove you can handle running an entire country on the full global geopolitical level, and for that, you’ll want to check out Democracy 3. The game is a little less exciting in its presentation than others featured here. Seriously, sometimes it feels like you’re playing a spreadsheet simulator. Get past that, however, and it offers a level of political simulation gameplay you won’t find anywhere else.

As president of whichever country you want, can you execute the ultimate balancing trick between economics, crime, climate change, global diplomacy, the fight against terror, and justice, all the while trying not to alienate the voter base that got you there in the first place? It’s far easier said than done. Democracy 3 is also mod-friendly, so much so you could change loads of policies, countries, and even make tweaks to the underlying simulation model with nothing but a text editor. Grab the DLC for even more fun.