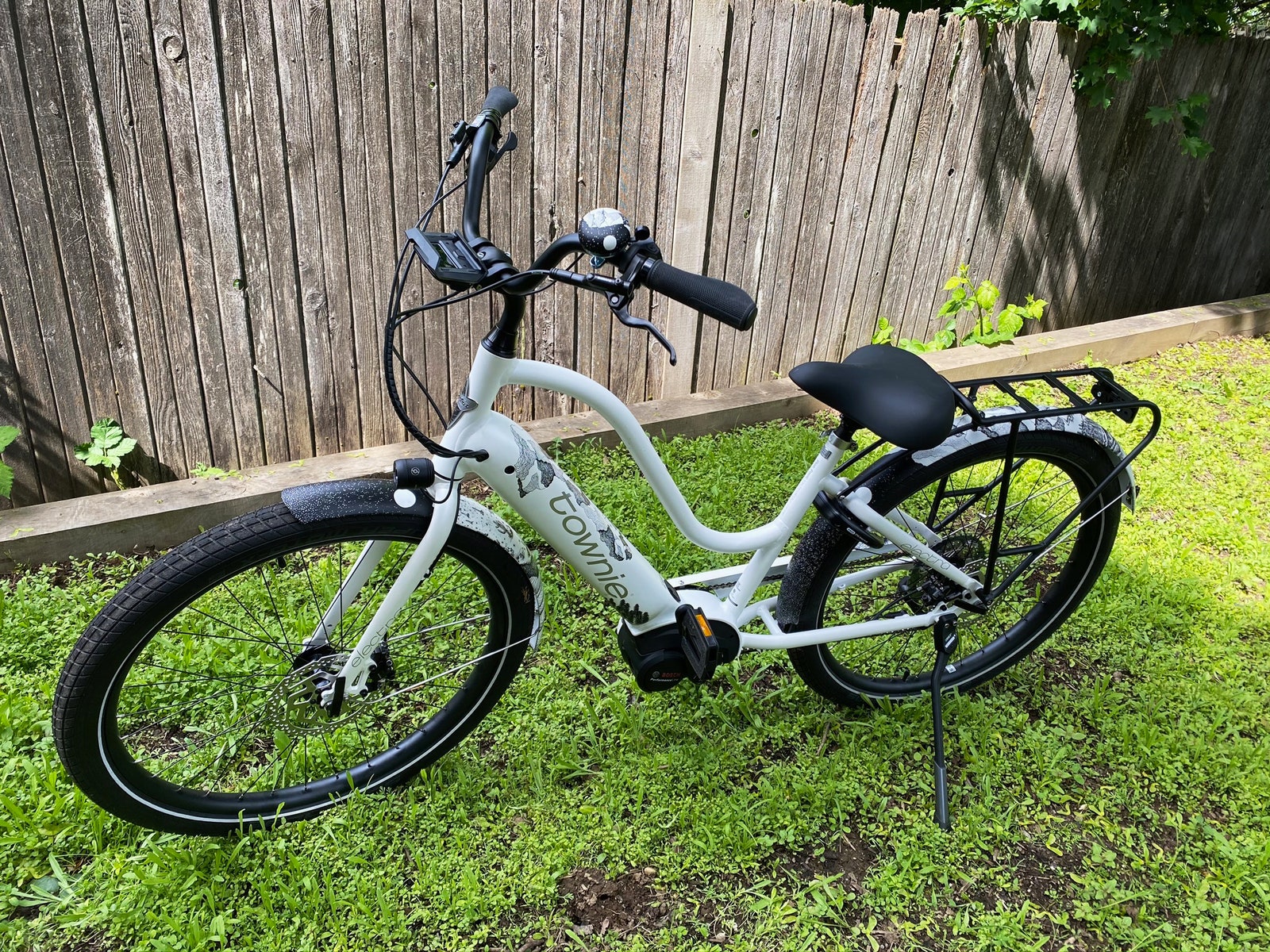 If an ebike’s motor is powerful enough to haul 300 pounds of unwieldy person, metal, and cargo up a steep hill, it’s quiet, the assistance feels natural, and it allows for a huge variety of cadence and torque variations over different terrain, then congrats! You’re probably using a Bosch drive system (and you likely spent several thousand dollars on it).

Electra’s latest cruiser has a Bosch Performance Line system with an integrated PowerTube 500W battery in the frame, and it works very close to what I described above. It’s an eye-catching ebike that’s designed to do mostly nothing, but to do it really, really well. I spent a few weeks riding it on and around the cracked streets, dirt, and gravel trails around my home in Portland, Oregon.

My tester was a beautiful white aluminum step-through, with a detailed paint job, fenders, a rack, and big, fat, Schwalbe tires that have reflective stripes and puncture-proof Kevlar casing. If you’re a newbie biker with a spare couple grand lying around and would like a high-performance ebike that doesn’t particularly look high-performance, I have found the easygoing ride for you.

This year, one of the most noticeable updates to Bosch’s drive system is its integration with Cobi.Bike, an Android and iOS smartphone app made by a company Bosch acquired in 2017.

You don’t need an app to ride a Bosch ebike. Even many high-end ones stick with a small LED display. But the Cobi.Bike app practically turns your bike into a car. I clamped my phone in the Electra’s included mount, turned on the bike, and swiped through the Cobi.Bike app’s dashboard to start tracking speed and distance traveled, and to see estimated battery life. (I also named the Electra “Bikey” in the app.)

You can also swipe through the app to check offline maps, track your workouts (if you don’t already have a fitness tracker), play music, check the weather, or call previously uploaded contacts. It can also charge your phone! And in a place with such variable weather as Oregon in the spring, where I frequently find my kids shrieking that it’s raining and sunny at the same time, I find the weather tracker to be particularly helpful.

I also like that the navigation app can pinpoint the bike’s location even when it’s off. That might make the bike easier to track down if it gets stolen. Speaking of potentially stolen bikes, the Electra comes with an integrated Abus frame lock for extra security, although I would recommend an additional U-lock for the front fork to make sure no one picks up your disabled bike and throws it in the back of a truck.

It’s worth noting that I have an iPhone 11 in a Pelican case. It fit fine in the mount, but it probably won’t work on a phone that’s much bigger.

Electra is a San Diego, California-based company, so Bikey looks very … well, cute. It comes in both a step-through style and a slightly sportier step-over frame. It’s 55 pounds, but as a small woman, I didn’t have particular trouble maneuvering it in and out of my garage and driveway.

Unlike a few other starter ebikes I’ve tried, it looks like a breezy cruiser, not a weird bike-scooter hybrid or small fake motorcycle. The minute I unloaded it from my car, Bikey demanded that I put on a sundress to flap in the breeze on my rides.

Electra’s “flat-foot” design is more comfortable than many sit-up frames. The seat angle is relaxed, and the pedals have been moved slightly forward, which means you can sit straight up on the bike, fully extend your legs while pedaling to avoid knee pain, and put your feet flat down on the ground when you stop. Anyone who has spent endless time twiddling with seat heights for different rides can appreciate what an achievement this is.

That upright, flat-foot posture makes the bike perfect for stop-and-start social riding, like a lazy Sunday jaunt 6 feet away from a neighbor as we tool around our neighborhood scavenging for piles of garden dirt.

Bikey is advertised as being able to go everywhere. It has a very squishy, comfortable seat and big ergonomic grips. But it doesn’t have any shocks, and the sit-up riding style is awkward to maneuver over more difficult terrain. I strongly suspect that to Electra, “everywhere” means “a beach” and “the sidewalk next to the beach.”

I took Bikey out on some single-track with bumpy tree roots, which I do not recommend. Also, whenever I had to pass people walking in a park, I pulled off onto soft dirt or rutted grass. The Electra jounced so badly that it rattled my iPhone right out of the mount. When the iPhone falls out, the Cobi.Bike app also shuts down. That means I took a spill or two when I suddenly lost assistance going up hills.

And while I did like the fenders and protected motor casing, which will keep riders from getting muddy and extend the life of the motor, they also rattled annoyingly whenever the road wasn’t perfectly smooth.

At first, Bikey fits into no particular demographic. Why would you get one of these, I wondered, as Bikey’s smooth, powerful motor carried me seamlessly up 15- to 20-degree hills, shifting quickly and smoothly through all 10 gears, stopping randomly with hydraulic disc brakes. Why would a newbie ebiker want a bike at this price point, with so many premium features?

But bikes are so personal, almost as much as cars. Maybe you’re a newbie biker who doesn’t want an ebike that screams “I have no idea what I’m doing!” It’s comfortable, cute, and has a top-of-the-line drive system. And because Trek bought Electra in 2014, you can buy one of these and get it serviced pretty much anywhere.

If you’re not a “bike person” with cash to spare, but nevertheless wants a decent commuter that won’t let you down, the Electra Townie Path Go! is … the way to go. Just keep your beloved Bikey away from too many tree roots.