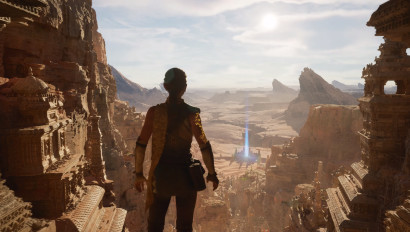 Epic Games gave us our first look at what games running on PS5 could look like during today’s Summer Game Fest livestream with an Unreal Engine demo running on Sony’s next-gen console.

Called “Lumen in the Land of Nanite,” the demo isn’t part of any game that’s intended for release according to the Washington Post, but Epic Games did say that it’s fully playable. The tech demo itself was captured out of the back of an actual PS5 via HDMI.

It’s meant to show off the company’s next game development engine, Unreal Engine 5, and specifically two new aspects of it: Lumen and Nanite. The first refers to the development tool’s new dynamic lighting system while the second is meant to create better detail.

Tech demos aren’t necessarily representative of true game graphics since they often don’t have to account for all the other things normally going on in a game. Back in 2012 Square Enix shared realtime demo called Agni’s Philosophy that ended up looking much better than any of the actual games that immediately followed it. Still, the tech demo is an interesting look at the types of thing that might be possible on PS5.

Our other look at next-gen gameplay came last week when Microsoft showed trailers for a number of games running on Xbox Series X. Those were actual games and not tech demos, but also heavily edited trailers that didn’t provide a ton of insight into how next-gen games might actually look or play differently.

During a post-demo interview with Geoff Keighley, Epic Games CEO Tim Sweeney didn’t bite when asked to compare the PS5’s capabilities to Xbox Series X. Instead, the opinionated head of Epic Games is specifically touting the power of PS5’s new proprietary SSD technology.

“The storage architecture on the PS5 is far ahead of anything you can buy on anything on PC for any amount of money right now,” Sweeney told The Verge. “It’s going to help drive future PCs. [The PC market is] going to see this thing ship and say, ‘Oh wow, SSDs are going to need to catch up with this.’” At the same time he stopped short of saying how that would stack up to the SSD speeds being promised by Microsoft.

Xbox Series X and PS5 are both due out later this year. Epic Games told the Post that Unreal Engine 5 won’t be widely available until 2021, with Fortnite getting ported to the new engine after it first launches on next gen consoles in Unreal Engine 4.