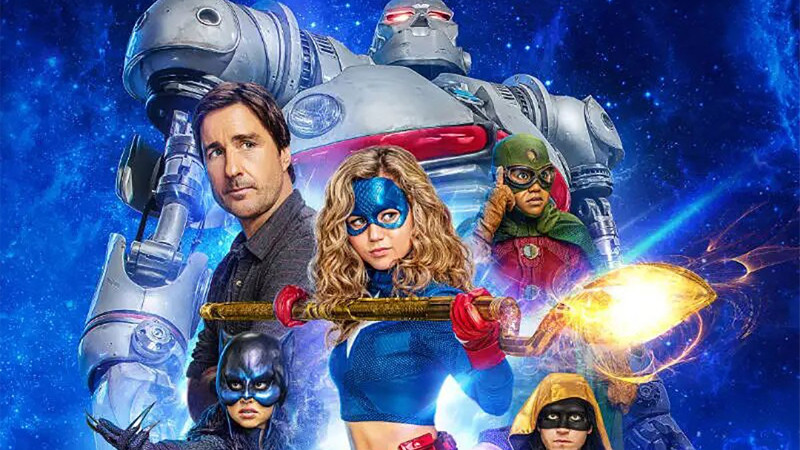 The Justice Society of America is dead. Long live the Justice Society of America! DC Comics’ first superteam is one of its most iconic and convoluted mythoi, the nexus of the publisher’s approach to its own fictional history. Its members have been rebirthed, re-imagined, retconned, and revived endlessly since their inception, and they’re about to be once again with the arrival of Stargirl on the CW and DC Universe. Confused? You should be. We’re here to…help?

Thankfully, the Justice Society has a relatively simple origin. The team was created by Sheldon Mayer and Gardner Fox for 1940’s All-Star Comics #3 as both a vehicle to elevate characters to solo-book status and as a crossover between National Comics and All-American Comics—the two companies that would merge to form DC four years later. The Justice Society united the likes of the golden age Green Lantern, the Flash, Hawkman, Hour-Man, Doctor Fate, and more as a single unit of crime-fighting heroes.

Over the years the Justice Society’s roster would grow and retract, characters in and out, but their adventures would come to an end just over a decade after they began when the Golden Age ended, with superhero comics on the way out in terms of popularity heading into the ‘50s. In 1951, All-Star Comics became instead All-Star Western, focusing on the popular pulp trend of cowboy stories at the time, and the Justice Society was no more.

But when the Silver Age resurgence of superhero characters provided a boom, the Justice Society represented a fascinating concept for what was now DC Comics to return to. But this time, Fox (now joined by editor Julius Schwartz) didn’t want to just bring the Justice Society back as it had been. In many ways, he couldn’t; the characters who had helped form the backbone of the Justice Society had been overhauled radically in their own transitions into the Silver Age. Alan Scott was no longer the Green Lantern; Carter Hall the Hawkman was now Katar Hol, Thanagarian space cop; and Barry Allen had replaced Jay Garrick as the Flash. With the team concept and part of the name reshaped, Fox relaunched his team up idea not as the Justice Society of America, but the Justice League.

The League was a smash hit, which eventually saw Fox play with the idea of bringing the Justice Society back. To do so, he relied on what would become another hallmark of DC storytelling. In order to get over the fact that these versions of specific characters were radically different to their counterparts and even, in the cases of characters like Superman and Batman, their literal selves, the Justice Society was re-introduced not as the League’s predecessors, but instead as their counterparts from Earth-2, an alternate, yet familiar reality.

The Justice League and the Justice Society would regularly cross over, travel between the separate realities of what was now the beginning of the DC Multiverse, with the Justice Society acting as a sort of older, more mature council of elders to the young upstarts of the Justice League. No longer bearing the burden of being DC’s primary team, the members of the Society were allowed to grow and develop in the ways their young counterparts in the League were not.

By the 1980s however, the Justice Society and their alternate home came to represent a growing concern in DC editorial, even as their yearly crossovers with the Justice League had become comics tradition. DC’s continuity, now sprawling back across decades of Silver Age comics and into the then-current twilight of the Bronze Age, had become too complex and too intimidating. The multiverse itself was too dense to represent anything other than a confusing mess to newer readers. So it was time to consolidate and re-imagine the company’s core heroes and refresh their origins to better help onboard new generations of readers.

It was time for a Crisis.

The iconic Crisis on Infinite Earths, kicking off in 1985, was an unprecedented event unlike anything ever seen before, not just at DC but in the comics industry at large, and it completely rebooted the publisher’s entire continuity. Icons like Batman, Superman, and Wonder Woman were given tweaked origins, or reset to earlier points in their careers, and entire Earths in the multiverse were either wiped out entirely by the threat of the Anti-Monitor or, in Crisis’ climax, merged into what would become the singular primary Earth of DC’s new reality. Earth-2 was one such victim, and with the Society being hit hard by having members of their team wiped from continuity altogether, they were stuck in an awkward place by this vast reshuffling of DC’s slate.

Literally. A miniseries called The Last Days of the JSA launched the year after DC took the surviving remnants of the Justice Society and dumped them in limbo, in a reality outside of time and space, as a sacrifice to avoid an apocalypse destroying the nascent universe that existed after Crisis. There would be no more yearly crossovers with the League, no more trips to Earth-Prime. Time and Crisis had done what the move from the Golden Age of Comics could not: the Justice Society of America was no more.

Well, that is until several attempts were made to bring the team back. In 1992, we saw a new Justice Society series begin, only for it to be canceled after less than a year. Zero Hour, the 1994 follow up to Crisis, saw the surviving Justice Society members depowered or killed off entirely, forced into retirement seemingly for good. That meant that the next time a reboot was in the cards by the end of the 20th century, a new generation was needed as replacements for the old guard. New characters took on the mantles of heroes like Hour-Man, Hawkgirl, Mister Terrific, and, important to us currently, Stargirl.

This version of the team managed to stick around a little longer than the attempted JSA revivals of the ‘90s, especially in part to Geoff Johns—who has been a major force spearheading the upcoming Stargirl TV show—launching a critically lauded run on Justice Society of America at DC in the mid-aughts. But continuity concerns would make victims of the Justice Society once more.

Infinite Crisis, published in 2006, had already established a second alternate Earth-2 beyond the Earth-2 the JSA called home, which was, alongside much of the then-current canon, wiped out entirely once more with DC’s infamous reboot in 2011 as “The New 52.” The JSA as a team was rebooted again when a new Earth-2 was introduced as part of this continuity; it was kept entirely separate from the prime reality of DC’s main comics, featured new versions of Hawkgirl, the original Green Lantern, and more, never crossing over.

That is, until last year actually. For the first time since the New 52 reboot, DC unveiled plans to bring the Justice Society back into prime DC Continuity—itself now known as DC Rebirth, having undergone a less-substantial but still significant reshuffling in 2016. The plan was almost as audacious as bringing back the original Justice Society into the prime reality, but perhaps more daring than any of DC’s myriad continuity resets.

As teased in the earliest days of DC Rebirth before being fully explored in Johns, Gary Frank, and Brad Anderson’s maxi-series Doomsday Clock, the Justice Society had been wiped out of continuity in the dawn of the New 52 by none other than Watchmen’s omnipotent guardian Doctor Manhattan (alongside the events of the iconic Alan Moore/Dave Gibbons/John Higgins series), now a part of prime DC canon. This erasure was part of Manhattan’s plans to muck about with the fabric of reality, ensuring that Alan Scott would never become the original Green Lantern, meaning he could not go on to help found the Justice Society. But the current Justice League run from Scott Snyder, James Tynion IV, and Jorge Jiminez re-integrated the past, original version of the JSA back into current continuity, as the Justice League found itself split across time and space battling Lex Luthor’s completely bonkers plans to usher in a new cosmic existence under the immortal evil being Perpetua.

Like all things involving the Justice Society throughout the years, it’s a lot. But that’s a story for another time.

It is perhaps truest to the JSA’s long and complex history, then, that the DC Universe and CW’s upcoming Stargirl TV show is far from the first time the team has been reforged, even for live-action adventures. The team was first brought to live-action with Absolute Justice, a Smallville movie event that attempted to act as a backdoor pilot to bring the JSA to the small screen as a spinoff, but, by justice of, well, being atrocious, it never actually got off the ground. More recently, an iteration of the team appeared in Legends of Tomorrow, operating as a 1940s superteam that the time-traveling misfits bumped into in the second season, only for most of the team to be wiped out in the fight for the Spear of Destiny and the Legends’ battles with Damien Dahrk. It’s not just on TV—ever since Shazam, and eventually Black Adam, were fated to enter DC’s current cinematic universe, there have been rumors swirling that the movies will feature their own take on the Justice Society, inspired by Shazam’s time in the group during Geoff Johns’ run.

The JSA of Stargirl is even more distinct than that, as it’s not actually related to the JSA we met in Legends of Tomorrow at all. Even though we got network-spanning crossovers in TV’s recent Crisis event, all of the CW’s heroes now inhabit a single Earth. And, to make things more confusing, even though Stargirl will air on the CW after it debuts on DC Universe each week, it is not part of what has come to be known as the Arrowverse. The story takes place on an unrelated Earth and picks up after that world’s Justice Society has long since hung up its collective cowls. The mantle of Starman (played by Joel McHale) and his cosmic staff has fallen to Brec Bassinger’s Courtney Whitmore, which she uses to not just become Stargirl but to recruit her high school friends to become part of a new, younger Justice Society, taking on the mantles of Doctor Mid-Nite (Beth Chapel, played by Anjelika Washington), Hourman (Rick Tyler, played by Cameron Gellman), and Wildcat (Yolanda Montez, played by Yvette Monreal) for their own alongside Pat Dugan, Courtney’s stepfather, in the STRIPE exosuit (Luke Wilson).

Given that the JSA is all about passing the torch on to younger generations, it’s perhaps a fitting twist. We’ll find out more about this latest take on DC’s oldest team when Stargirl hits DC Universe starting on May 18, premiering on the CW a day later.