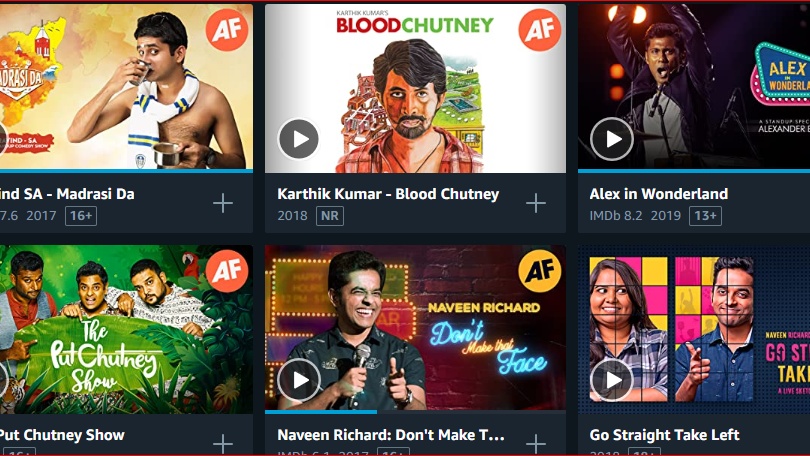 At the risk of triggering a needless chauvunistic language row — which anyway India is notorious for — we have to say that among Indians, Tamils and Malayalis have the most well-honed sense of humour. Their films are deemed to have the best comedic parts and the humour quotient among the people is generally rated high.

And this is reflected in the good collection of standup comedy acts from the Tamils on Amazon Prime, which, it should be said, has been doing its bit to encourage Indian standup comic talents.

Here we cherry pick five specific shows from Tamils on Amazon Prime — notice we don’t say Tamil shows. That’s because most of these acts are bilingual ones (Tamil and English). It also needs to be told that there is a great tradition of bilingual puns in Tamil Nadu where one word from one language is humorously used in another to work up a riotous wordplay. It is difficult to give specific examples because such jokes inevitably die in translation.

Here goes our five picks in no specific order, and if you happen to binge watch them through the weekend, trust us, you’ll grin your way through your dreary and dreadful Monday morning office call.

First up, the curious title ‘Blood Chutney’ needs to be explained to those outside of Tamil pop culture ecosystem. Blood and (tomato) chutney can look deceptively similar when splashed on a person. There is an enormously popular joke based on this idea, and it is the stuff of gazillion of memes that Tamil nation is known for.

Karthik Kumar is a seasoned theatre personality and a film actor (he has given up films to focus on his comic and stage career). He also runs Evam group, which provides budding standup comics a platform to purvey their talents in Tamil Nadu.

Karthik Kumar’s humour is sardonic and subtle, and in this act from 2018, he takes the mickey out of the quandaries that life mischievously places most of us in. His jokes may not make you jump right out of your seats or slap the lap of your neighbour in uncontrolled mirth, but it will sure make you break into a thick smile. His jokes have a way of working in retrospection.

Baggy in & as Kungfu Bonda

Again, the title needs a bit of a reference. Bonda is a lip-smacking tiffin type dish famous in South India. Kungfu Bonda then is an obvious pun on the ever-enjoyable animation movie Kungfu Panda.

Baggy is the stage alias for Bhargav Ramakrishnan, and his jokes are mostly self-deprecatory, especially his own rotund mien (which, as a matter of fact, one is bound to get when one gobbles up plenty of bondas.)

This show, unveiled on Prime this year, is in a sense, a rites of passage humour set piece based on Baggy’s life’s tragic and traumatic experience of, well, turning thirty. It is humour that is easily accessible and relatable. Baggy’s deadpan delivery is a delight.

Praveen Kumar, with his receding hairline and thick spectacles, has embraced unclehood faster than some others. But rather than feel angsty or fret about it, Praveen has decided to make a career around it.

His standup acts are mostly centered on the travails of a humdrum family man, and as you would expect, some jokes just write themselves in this genre. But Praveen soldiers on and does not go for the low hanging fruits, as it were, instead builds up the situations to pull off interesting zingers.

His avuncular presence fits the bill for this family act. Though his references are more Tamil than some others in this list, the humour overall is universal. And that is what works in this act unveiled this year.

Alex in Wonderland by Alexander Babu

At 2 hours 16 minutes, this is probably one of the longest acts, but you will never feel stretched or bored, and that is because the show is unique as it combines humour and music. Yes, in a sense, this is a one-man vaudeville act of music & mirth. Alexander can play most instruments and sing a mean tune in total resonance.

And that is the calling card of this show where Alexander spoofs the popular singers and musicians of Tamil Nadu by performing in their very own style. To perform musically like others is tough enough, but to present it as a comic show requires prowess bordering on genius.

Alexander does that with elan, and also retains the energy to last a show of such length. You laugh at his jokes. You marvel at his musical talent. You just take your hats off for his endurance.

Aravind has that one quality that one needs to have to be a popular comic among the youth — good looks. Just kidding, Aravind SA, stuck in 30 for the last few years, is an enormously popular comedian who kind of pioneered the acts in the State for others to follow his footsteps. In that sense, he is, at 30,  the grand old man of standup act in Tamil Nadu.

His shows in India and abroad are sellouts among the youth set because his jokes and one-liners are edgy in an endearing sort of way. He takes touchy subjects, say the North-South divide in India, works his humour around it. The title Madrasi da is in itself a reference to the pejorative put-downer that North Indians use for people living south of Vindhyas (the notional border between South and North India.)

Aravind’s show, on from 2017, is still popular because it bursts the balloon of stereotypes. Aravind uses the heavy South Indian (Tamil) accent to good effect to make his jokes pierce deeper. The jokes are not frivolous, they have pith and  poise.

Now check these shows out, and have a fun-filled weekend!

Skull and Bones could be aiming for a November release

Skull and Bones could be aiming for a November release