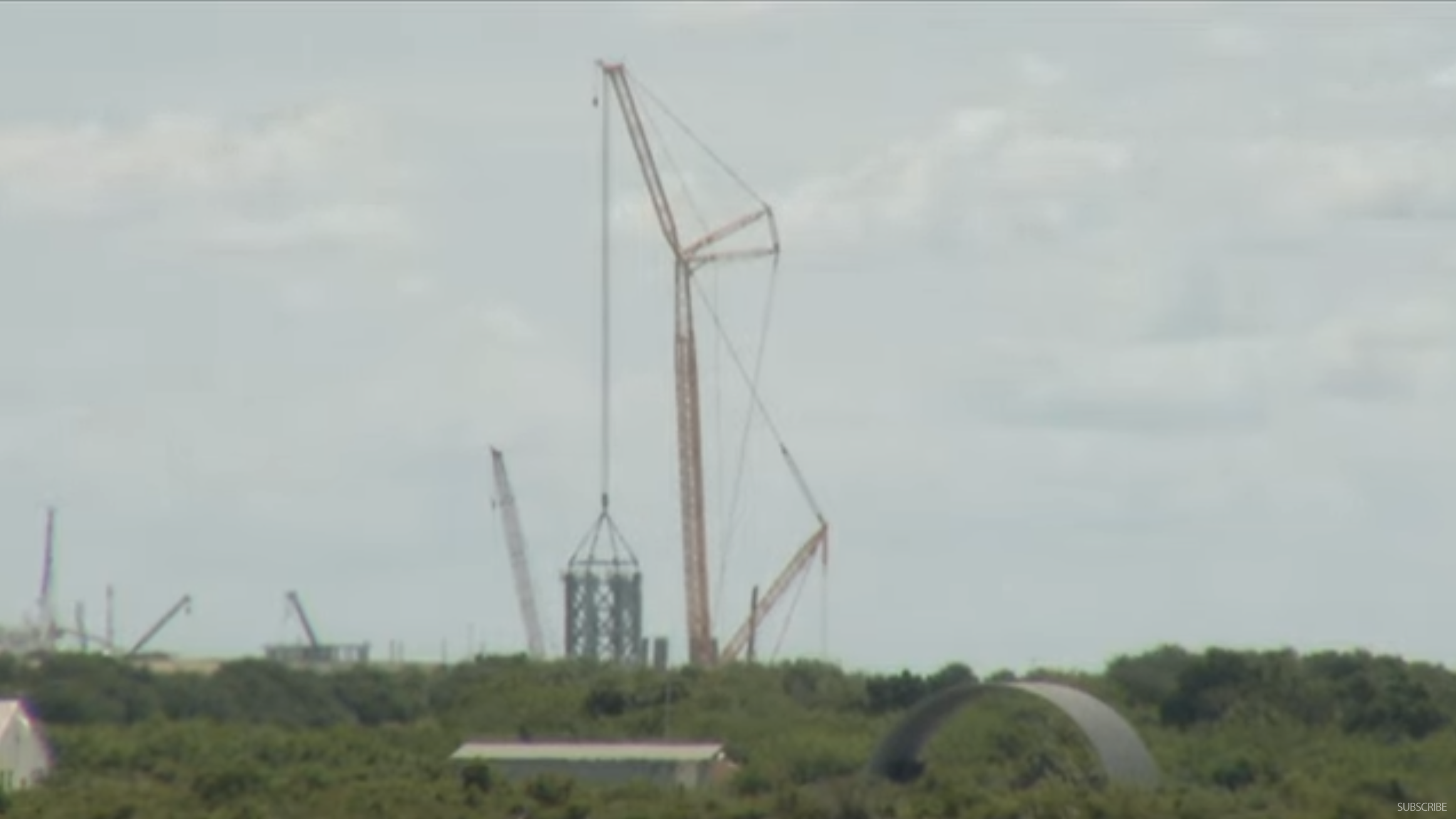 Telsarati says the Starship tower, once complete (possibly in a few months from now), will become the second tallest rocket-related structure along the eastern coast, with only NASA’s Vehicle Assembly Building (VAB) being taller. A similar structure currently exists at SpaceX’s facility in Boca Chica, Texas, where the 469-foot-tall launch and catch tower is currently being put through tests.

The launch mount is designed to support the fully stacked Starship consisting of a Super Heavy booster and an upper stage. Powered by 33 methane-fueled Raptor engines, the reusable 30-foot-wide (9 meters) booster will take off with roughly 17 million pounds of thrust. After the reusable upper stage takes over, the booster will return to the pad and attempt an assisted vertical landing. SpaceX is hoping to perform 24 Starship launches each year from Launch Complex 39A.

The Elon Musk-led company plans to use fully stacked Starships for delivering cargo and crews to low Earth orbit, the Moon, and other solar system locales. The company is working under a $2.9 billion contract with NASA to leverage Starship as a human landing system for the upcoming Artemis missions to the Moon.

Teslarati says SpaceX has spent the past several months building and outfitting the first six of nine prefabricated tower sections. The newly built stack is already in an advanced state, as Teslarati reports:

The sections SpaceX began stacking on June 21st already have a variety of railings, elevator shafts, doorways, walkways, hardpoints, plumbing, and more preinstalled. While each section and all abbreviated plumbing and hardware will need to be connected after each stack, that process should be far easier and faster than the methods SpaceX used in South Texas. Offsite, SpaceX is also making excellent progress [assembling] the pad’s donut-like orbital launch mount and parts of the three giant arms that will eventually attach to Starship’s first Florida launch tower – two for lifting and catching rockets and a third for stabilizing and fueling Starship.

Plenty of work remains. In addition to completing the other stacks, SpaceX needs to install the tower’s three arms and construct a new tank farm for the required liquid methane. The tower arms will need to support the rocket during stacking, but also catch the booster during landing.

As CBS reporter William Harwood pointed out today in a tweet, SpaceX “only has permission to build the launch stand, but does not yet have permission to launch from it.” The agency said it needs to conduct a “thorough” review of Starship and evaluate potential risks posed by launches located so close to the Falcon 9 launch pad, Harwood added. Indeed, NASA relies on SpaceX’s Crew Dragon to deliver its astronauts to the ISS, so disruptions to Falcon 9 launches would not be ideal. The Starship tower is located a mere 1,000 feet (300 meters) from where SpaceX launches its Falcon 9 and Falcon Heavy rockets, according to Spaceflight Now.

SpaceX was granted permission to perform development work within the perimeter of Launch Complex 39A following the successful completion of an environmental assessment in 2019. The company has plans to build yet another launch site, Launch Complex 49, which would “allow SpaceX to increase the flight rate of Starship and minimize potential disruptions to Falcon, Falcon Heavy, and Dragon missions at LC-39A,” according to NASA. The space agency still needs to complete an environmental analysis before committing to the plan, which would see the development of 175 acres north of Launch Complex 39B.

The company’s plan to launch Starships from its facility in Boca Chica took a major step forward earlier this month when the Federal Aviation Administration declared that the fully stacked Starship would have “no significant impact” on people living in the area. That said, SpaceX needs to take 75 environmental “actions” in order to proceed, and also secure safety permits, among other regulatory approvals.