‘Fuser’ feels amazing to play, but it doesn’t quite nail the ‘be a DJ all-star!’ fantasy 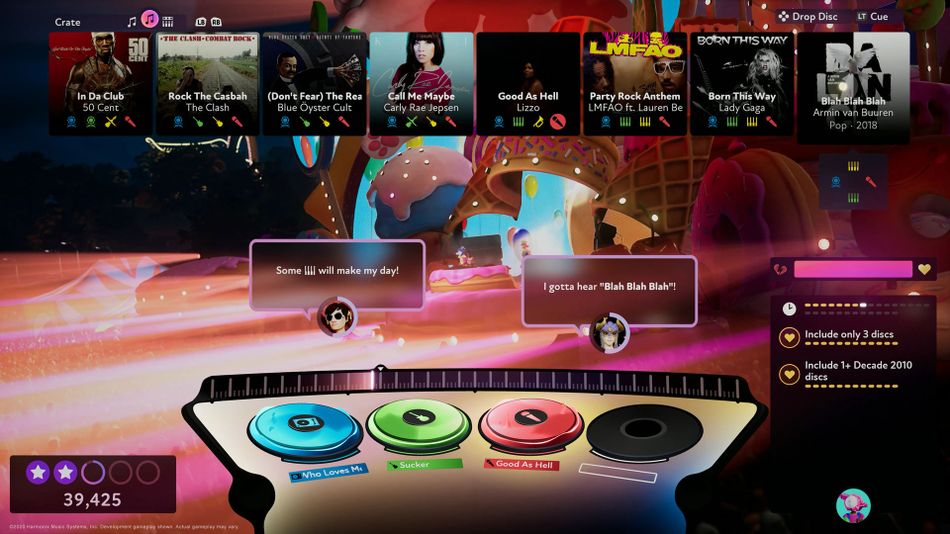 I really want Fuser to be awesome, if only because the basic mechanics are so ridiculously cool.

Imagine you’re a headlining DJ. You’ve got a crate of records to spin, a spread of turntables and mixing gear, and an audience. Your job is to make an epic and ever-evolving mix out of popular songs, whipping the crowd into an ecstatic frenzy with creative pairings and dramatic drops.

That’s Fuser. It’s like a video-game version of DropMix, the app-enhanced tabletop game that lets you create musical mash-ups using NFC-equipped playing cards. Both are products of the talented creative team at Harmonix, the Boston-based studio best known for the Rock Band series.

I’ve spent the past few days tooling around with a preview build of Fuser, and I’m sad it say it hasn’t really nailed the promise of making you feel like a crowd-rocking pro. The tools that let you turn an assortment of well-known songs into your own custom mix are superb, but the video game built around them (so far) doesn’t succeed at making those tools feel engaging in a structured way.

You spend the majority of your time in Fuser looking at views like the one pictured above. Before I get into how it all works, let me break down each chunk of what you’re looking at on that screen.

The tiled bar at the top is your “Crate.” That’s where you access all of the music you bring with you to a particular show. Depending on which mode you’re playing, you can either fill the Crate with whichever songs you want from Fuser‘s library or use a pre-assigned set. The four colored, instrument-shaped icons at the bottom of each song tile denote which individual tracks from that song you can play with.

So for Carly Rae Jepsen’s hit 2011 single “Call Me Maybe” (middle tile with the blue background in the above image), for example, you can pull out the drum (blue), strings (green), bass (yellow), or vocal (red) tracks to lay down in your mix. And for Blue Öyster Cult’s “(Don’t Fear) The Reaper,” to take another example, you can choose from drums, bass, guitar, and vocals. Each color corresponds to one of the four record platters at the bottom of the screen.

You can layer up to four tracks into your mix, one on each platter. Tapping a face button (A, X, Y, and B on an Xbox controller) that corresponds to the icon/track you’d like to lay down locks it in automatically. But you can also manually place a track by pressing and holding the desired button instead, and then dragging the track down to whichever platter you want — useful for when you want to, say, layer together several (blue) drum tracks.

The box on the right side of the screen, which appears in Fuser‘s Campaign mode, lays out objectives. In the above example, the game is asking for a three-disc mix as well as one or more tracks from a song release in the 2010s. Clear these in the allotted time and you get a new set of objectives. This repeats until the show ends, which I think is on a timer.

The little hash marks beneath each objective tell you how many bars the game wants those objectives to be filled for before they’re marked as complete. The larger cluster of hash marks at the top of the window is your timer for completing all of the objectives listed. Each hash mark represents one bar of music. Clearing objectives keeps the crowd happy, as measured in the meter situated just above the objectives window.

The turntable platters always show whichever tracks are currently playing (as well as the ones you have cued up, as you get into more advanced features). The meter above your turntable platters is how you keep time with the music, which plays at whatever beats-per-minute (BPM) is set for the stage you’re playing on. A progress indicator slides across the bar in time to the music, and you’re usually looking for it to reach those larger white lines, which mark the downbeat.

Don’t forget, this is Harmonix we’re talking about. Fuser is a rhythm game at its core, and you get the most points when you change up your mix on a downbeat. You want that higher score because it means a better star-rating for the show once your performance is over.

Finally, the two boxes in the dead center of the screen are bonus objectives, in the form of crowd requests, that appear occasionally. In the above example, you’ve got one audience member asking for a keyboard track and another asking for any track from Armin van Buren’s “Blah Blah Blah.” In this case, you can knock out both requests in a single move by layering in a keyboard track from “Blah Blah Blah.”

There are more advanced tools as well. A whole section of the Crate menu is devoted to a variety of electronic instruments – some drums, some bass, some horns and synths – that you can use to create solos or record loops to layer into your mix right in the middle of a show. You can also use advanced controls on each turntable platter to mute, swap, or eject individual tracks and queue up multiple tracks to drop in all at once.

It’s an awful lot to manage, to the point that it feels overwhelming at first. But in my time playing I found it was very hard to make a truly bad mix in Fuser. The machine brain that layers tracks together is smart enough to do its own autotuning and beat quantizing. Your own familiarity with the music selection helps a lot, but you can just as easily pick stuff at random. So long as you’re hitting those drops on the downbeat, you’re going to get aurally pleasing results most of the time.

Putting on a show

I spent multiple hours during my preview time just messing around with mixes in Freestyle mode, which is a little bit training ground and a little bit “make your own show.” Fuser‘s mechanics really shine once you’re freed to just do whatever you want — to, in essence, think more about the music and the construction of your mix than the demands of objectives and crowd scores.

The Campaign mode, where what I guess you’d call the game of it all really comes into play, is where I found myself stumbling. Only two stages are unlocked in the preview build and one is pretty much a pure tutorial – great for grasping the basics of how to play but little else.

The other stage in the preview is still from an early part of the game, so there’s a couple of tutorial moments there as well that introduce playing and looping solos. But I think it’s a much better reflection of how Harmonix intends Fuser‘s individual shows to work. You really start to juggle the challenge of multiple objectives and crowd requests, all while timing your drops to the beat.

The breakneck pace of it all just didn’t click for me. I get that it’s a show and you’re moving in time to the music, so that frenetic vibe is intentional. Harmonix described Fuser to me as a game of plate-spinning, and I think that’s accurate. You’re keeping track of objectives and requests, and then dropping tracks in time with the music. Fumble too much, and those proverbial plates start to fall as the crowd grows restless.

It doesn’t take much to fail out of a performance, and that’s part of the problem. It happened to me at least a dozen times before I realized how to actually play Fuser‘s campaign successfully. The quality of your mix and lining up complementary track swaps matter far less than checking the boxes the game wants you to check. If you prioritize objectives and requests above all, it’s hard to fail.

But playing that way means your mash-up isn’t as good.

But playing that way means your mash-up isn’t as good. Dropping a track on the downbeat is easy, but doing so in a way that works with the musical picture you’re weaving together is much trickier. You might want to segue from vocals for Smash Mouth’s “All Star” into the vocals for “Call Me Maybe,” but if you wait until the former’s verse hits a natural breaking point to the listener’s ear, you risk waiting too long and killing your score.

That’s what I mean when I say the game presented in Fuser‘s Campaign mode lacks structure. Building the challenge around plate-spinning in the way Harmonix did it makes sense from the perspective of giving players points and ratings to chase. It’s just also not terribly satisfying because it gets in the way of the cool music mash-ups you can make, and therefore the central fantasy of letting you live your stage DJ dreams.

Campaign isn’t meant to be the sole focus in Fuser, of course. There’s also online multiplayer and content creation/social sharing, as well as a whole mess of customization options – from the look of your DJ to the looping video that plays on stage-mounted screens during your shows – that let you tweak your in-game personality for an online audience. But based on what I saw in the preview build, I’m not convinced Fuser is really there yet.

It’s important to remember that this is all based on a limited glimpse of the final package. I couldn’t say how to fix the structural problems I encountered, though. It’s possible that the scoring just isn’t generous enough in this preview build, or the objectives don’t have a long enough timer. It could also just be my own lack of experience, and the fact that the preview jumps ahead a bit after that opening tutorial stage, so what should be a gentle ramp-up is instead more of a crash course.

Also, the Campaign itself may be less vital to the overall experience if online and social features become the focus when all is said and done. But it’s the first option on Fuser‘s main menu, and the one Harmonix chose to highlight in our first hands-on look. Freestyle turned out to be a much better showcase for what Fuser is capable of when it’s set free, but it’s not like there’s a game there. It’s just the act of mash-up creation, made delightfully approachable. And hey, that may be enough once people start sharing. It was for me.

We’ll have to wait and see how things develop. I’m not at all sold on Fuser as a video game with levels and challenges and points and unlocks. But the basic mechanics work so well in their own right, I’m willing to give Harmonix the benefit of the doubt.

Time in business (tib) needs to be at least 1 year – $120,000 in annual sales – credit score down to 551+. Kultur oplevelse i tønder? se de bedste kultur oplevelser i tønder. Solar energy solutions for all your off grid living solar energy & you.