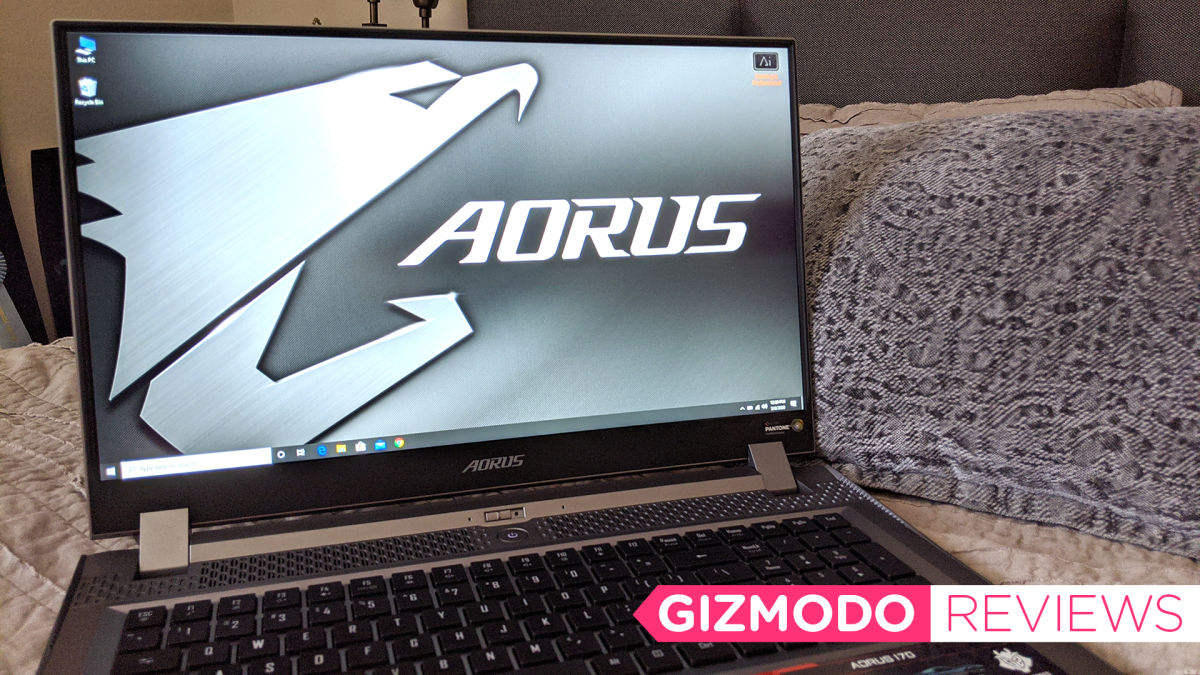 While gaming laptops have gotten a lot thinner and lighter over the years, they can still be cumbersome to carry around. When Max-Q came along, that helped shrink their size down further—at the cost of some performance—and made them as good looking as a MacBook. But if you’re not the type to compromise on performance, whether for gaming or creative work, your options are limited to metaphorical bricks. Gigabyte’s newest Aorus 17G model is one of those bricks, but poor thermals and some unpleasant design choices make it one of my least favorite bricks.

Don’t get me wrong—there’s a few sleek things about it, like the matte gray finish and reflective Aorus logo on the top. The display bezel is only 3mm, and the chassis is slim for this kind of gaming laptop (26mm), even though the entire thing weighs nearly six pounds. It’s a well-designed laptop when you first pull it out of the box, and the specs help, too: Intel Core i7-10875H (8-core/16-thread, 2.3GHz base/5.1GHz boost CPU), RTX 2070 Super GPU, 16GB DDR4-2933 RAM, and a decently sized 512GB M.2 SSD. Also, this is the first time Intel has put eight cores into its mobile i7 processor, and one of the first laptop makers to put out models with RTX Super graphics cards. The Gigabyte Aorus 17G is one the first laptops pack with Intel and Nvidia’s newest mobile parts and our first glimpse at what kind of performance both companies’ big upgrades actually afford you. More on that in a moment.

But back to the Aorus 17G’s body—fully open it doesn’t look the same without Gigabyte’s promo image polish. The keyboard keys are square. Too square. They’re almost too small and placed too close together. Instead of a subtle, stretched out look of something like Lenovo’s gaming laptop keyboards, it feels like Gigabyte was trying to jam a full-sized keyboard into too small a space, and then pushed out a prototype design instead of the final version. The keyboard is more function over form, and not at all aesthetically pleasing.

The look of the keyboard, webcam placement, gaming performance is a little lackluster

But using it is great. The low-profile, mechanical keyboard is tactile and clicky, and yet quieter than a desktop keyboard with similar blue switches. I’ve always preferred linear red switches because the typing sound doesn’t grate on my eardrums. It’s more is hollow-like rather than, well, clicky, like an old-school typewriter. It’s the high-pitched, loud clicking sound of blue switches that I don’t like. But compared to the Asus ROG Flare with red switches I use for gaming and work, there’s a part of me that prefers the sound of the Aorus 17G’s keys just because the click is quieter. The responsiveness of the keys translate well from gaming to typing, too.

While the keyboard gives me mixed feelings the placement of the power port just irritates me. The power cord plugs into the right side of the laptop, which can sometimes get in the way of the mouse when you’re gaming. The port is almost dead center on the right side, so it will be in the way no matter what where you put the cord itself. And unfortunately, you’ll want to keep the Aorus 17G plugged in at all times. It took four hours for the battery to die while this video played on full-screen at 60 percent brightness (200 nits). Expect even less time when doing more demanding tasks like gaming.

But I’ll take an awkwardly placed power adapter outlet, and even a short battery life, over the Aorus 17G’s webcam placement. Like previous generations of the Dell XPS 13, it’s embedded below the display to keep thin bezels elsewhere. I have to hold the laptop eye-level for the webcam to capture my face straight on. On a regular desk, the camera captures my torso, which is highly inappropriate for work meetings. It’s also a run-of-the-mill camera, maxing out at 720p 30fps. The image quality is slightly blurry and grainy.

Image quality on the webcam might suck, but Gigabyte has packed in an impressive display. Its 240Hz 1080p display is fantastic and a world of difference from the 60Hz 1080p monitor I use for work and most games. A 240Hz refresh rate means 240 frames can appear on the display a second instead of just 60 as on most standard laptops.

I’m still skeptical about whether or not playing a first-person shooter at a higher refresh rate can improve the accuracy of the average gamer (it definitely didn’t improve mine), but there is a clear, noticeable difference between 60Hz and 240Hz. If you play a lot of shooters, that’s probably going to matter more to you than if you play MMOs or indie games and want a gaming laptop. Anecdotally, my aim improved by 5-10 percent depending on what Overwatch hero I was playing, but it could also be because I was playing against individuals with a lower skill level. That 240Hz will not help me against a pro.

You’ll notice the display resolution on the Aorus 17G is limited to 1080p instead of 4K or 1440p. That was a clear decision intended to prioritize framerate over resolution. Instead of the GPU churning to produce a pretty picture at high resolutions it can focus on producing as many frames as possible per second. The problem is the laptop seems held back. The powerful RTX 2070 Super rarely if ever actually gets you the 240 frames per second that would take advantage of that 240Hz display. It wasn’t a problem for Overwatch, where, at 1080p ultra, I hit over 200 fps. But on more demanding titles I couldn’t even get 100fps. Far Cry 5 nets 65 fps, Total War: Warhammer II 77 fps, and Shadow of the Tomb Raider 85 fps (highest).

The Aorus 17G struggled the most with Metro Exodus, only coming in at an average of 51 fps. With ray tracing on and turned to high, that drops to 42 fps. These numbers aren’t completely out of line with how the desktop version of the RTX 2070 Super performs in something like Shadow of the Tomb Raider. Yet a game like Far Cry 5 should be performing at or around 98 fps at 1080p ultra. Not 65 fps.

I’d hazard the issue is with the thermals on the laptop. This thing just gets hot, especially when its CPU is reaching up to a boost clock of 4.8/4.9GHz, according to CUPID Hardware Monitor Pro. Intel’s Thermal Velocity Boost gives the processor a 200MHz bump if its temperature is 65 degrees Celsius or below, or 100MHz if running below 85 degrees Celsius. So it will run faster the cooler it is. However, it also uses Intel’s Turbo Boost Technology, which identifies the ‘better’ CPU cores that are stable at higher frequencies and gives them a speed boost. That boost comes at a very hot price with the Aorus 17G: a max CPU temperature of 92 degrees Celsius, which is just under Intel’s “safe” maximum, but that means you’re missing out on an extra 200MHz because the processor is running so hot.

With so many gaming laptops to choose from, the $2,700 price tag on this one comes with several caveats. The Intel Core i7-10875H isn’t overclockable, so you’ll have to rely on Intel’s Turbo Boost Technology and Thermal Velocity Boost to do the work for you and hope the laptop stays cool enough to take advantage of both. With the RTX 2070 Super, in-game frame rates aren’t bad by any means, but if you must have triple-digit numbers, then you’ll need to turn the graphics settings down a notch or two—or three. It’s a middling showcase for Intel and Nvidia’s latest technology. I still have the Asus ROG Zephyrus G14 and others to compare this to, so if you’re in the market for a gaming laptop, don’t go out and buy one just yet.