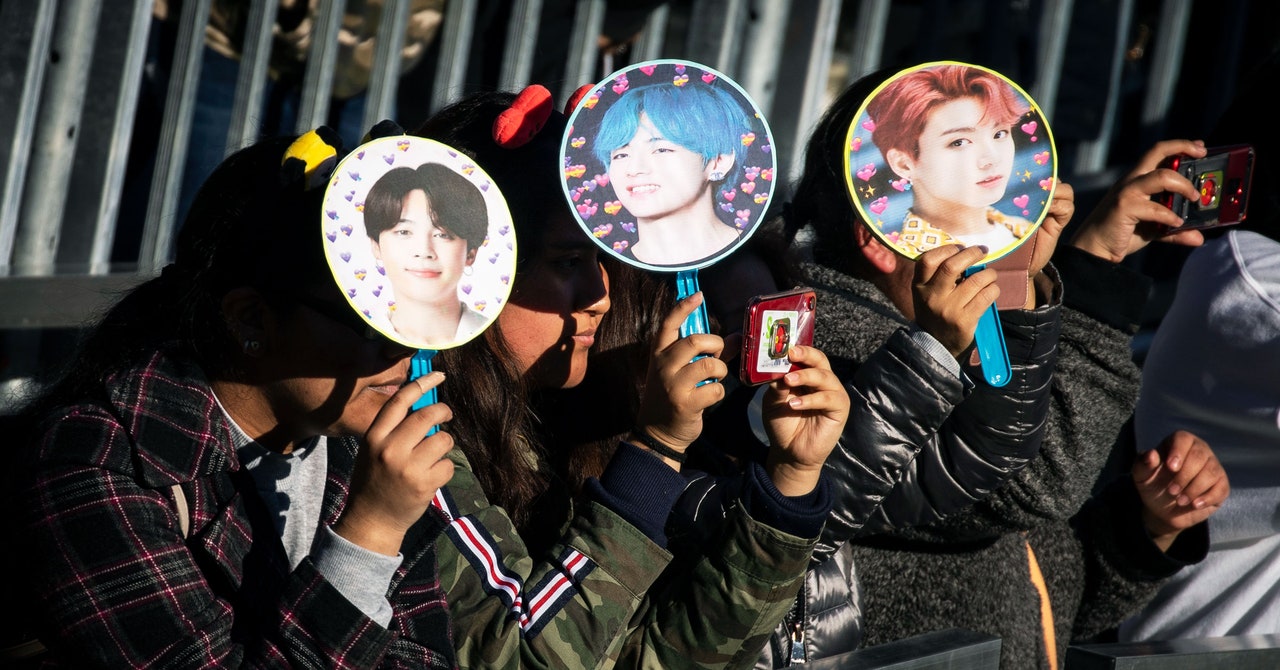 That K-pop stans are adept at being heard online is no surprise—digital literacy is essential for K-pop artists and their fans across the globe. “Above all, K-pop has achieved its global prominence thanks to digital technology,” says Um. “K-pop’s success also owes a lot to Western-based social media.”

Their activism hasn’t been limited to America, either. In 2016, Taiwan-born singer Tzuyu released a video through her record label in which she apologized to her Chinese fanbase for waving a Taiwanese flag on Korean television. (China regards Taiwan as a Chinese province rather than an independent state.) The website of the label, believed to have forced Tzuyu to apologize against her will, was taken down in a DDoS attack, in which Williams believes K-pop stans played a role.

This pivot to wokeness, however, is in some senses unexpected. One of the original attractions of K-pop, Williams says, is that it was apolitical, fantastical, and removed from people’s home politics and American hegemony. Some of the community’s racial politics have also been unsavory. “There is a long history of American black music influencing K-pop. But it’s not so clear-cut. I mean, a lot of black K-pop fans get racially harassed,” he says.

With this demographic, Trump would seem like a natural enemy. “We have all the people Trump doesn’t like. It’s not that we prefer Joe Biden, it’s that we want Trump out.”

In some sense, K-pop’s appropriation of black music may also have motivated the move. Though K-pop artists are mostly resolutely nonpolitical, says Lie, BTS donated $1 million to Black Lives Matter, which the BTS ARMY (BTS fan group) was able to match within 24 hours. “So there’s a sense of ‘giving back,’ but the more important ideological source is anti-racism,” he says.

K-pop stans also want to spread a good image for the groups in the genre. “They have always been well organized and highly motivated to promote their artists, for example by voting for their fans to win awards, sending their song requests for K-pop artists to the local radios, making their demands for K-pop CDs and merchandise to the local music retailers,” says Um. “One of the significant K-pop fan activities is fund-raising campaigns for various occasions, for example Chinese fans of BTS raised 2.25 million yuan for the BTS member V’s birthday, with the progress of online collection presented on their fan site.”

But it would be wrong to see the group as monolithic—it is a disparate, international group, with different motivations. “K-pop fans engaged in Black Lives Matter-related activities and groups are predominantly based in the US and Trump’s anti-immigration attitudes surely grate, as well as his insensitivity toward Black Lives Matter related issues,” says Lie.

This active faction likely makes up a small part of a worldwide group who listen to K-pop to escape politics, not engage with it. “Both K-pop and K-pop fans are cosmopolitan in the sense that they embrace multicultural, global, and transnational flows and influences,” says Um. “But at the same time, K-pop fans are not a homogeneous group by any means. While sharing their interests and passion for their music and artists, K-pop communities across the globe are also very locally situated and specific.”

As for Ria, she plans to engage in more online activism and thinks K-pop stans will continue, too. “People just see us as teenagers with a lot of time on their hands but what we can do with all that time is things like we did at Trump’s rally,” she says. “We are people and we are affected by his decisions – we aren’t just K-pop stans, we’re humans before we’re fans, and if we have the platform and the numbers to try to make a change then we’ll do it.”