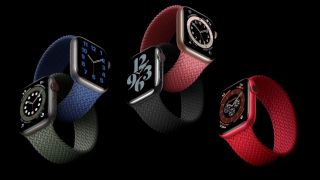 The Apple Watch 6 has just been unveiled by Apple, and below we’ve got all the details you need to buy the new device.

The Watch 6 was unveiled alongside the Apple Watch SE, a new affordable smartwatch from the company.

Apple has introduced new colors for the Apple Watch 6, and that includes a new blue aluminum case as well as a gold version of the stainless steel variant. There’s also a black graphite variant, and a product red version for the first time.

Apple hasn’t confirmed many other design changes, and from the photos we’ve seen in the stream it looks very much like an Apple Watch 4 or Apple Watch 5, so you shouldn’t expect any big redesigns here.

The always-on display is back, and it’s been improved for the Apple Watch 6. Apple says the always-on mode is 2.5x brighter than previously, which should make it easier to see in different lighting.

Apple also announced a variety of new band types, including new colors for existing straps. There are two new band styles called the Solo Loop and the Solo Braided Loop, both of which don’t have clasps, allowing you to stretch the band over your wrist.

You can read more about the Apple Watch 6 here.