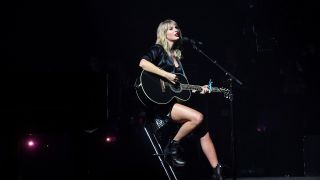 Get ready to shake it off, Swifties, because while concerts may be on hiatus due to the global Covid-19 outbreak, Girl Squad boss-in-chief Taylor Swift still has a treat in store for you this weekend! Here’s how to watch the Taylor Swift concert live online and stream today’s City of Lover TV special from anywhere in the world.

City of Lover is the name of Taylor Swift’s TV concert special and it’s being aired at 10pm ET/PT on Sunday, May 17 by US television network ABC. No cable? No problem. ABC is available as part of the Hulu + Live TV package, which offers a FREE 1-week trial .

City of Lover premieres right after the season finale of American Idol 2020 and is comprised of footage from Taylor’s 2019 gig at the iconic L’Olympia Theater in Paris. It saw her perform 16 songs in total, including live debuts of a number of tracks featured on her latest album, Lover. Millennial anthems like ‘Shake It off’ and ‘Love Story’ also made the set list, so it’s safe to say fans won’t be disappointed by tonight’s concert special.

The special TV event obviously isn’t the same as seeing Tay-Tay in the flesh, but it should help ease the pain for those left disappointed by the rescheduling of her upcoming Lover Fest tour to 2021. Enough of our support act, though – here’s how to watch the Taylor Swift Lover City concert live online and stream the special TV event anywhere for free.

ABC makes it easy to catch tonight’s special Taylor Swift concert. As well as being able to watch it live on TV from 10pm ET/PT, or 9pm CT, it’s also available to stream via the network’s website – all you need to hand is details of your TV provider and you can stream it all for free.

Those without cable could do worse than considering Hulu + Live TV, which costs $54.99 a month but is a complete cable replacement that offers 60 channels live and on demand, as well as access to Hulu’s extensive streaming library. Best of all, there’s a FREE 1-week trial so you can see if it’s the right option for you without paying a penny.

Alternatively, if you can wait a few hours then Disney Plus will have Taylor Swift’s Lover City concert available for streaming from Monday, May 18.

As you can see, anyone in the US will likely find it easy to watch the Taylor Swift concert live on ABC tonight. But if you’re currently elsewhere, it’s not quite that straightforward, though, as ABC doesn’t have partner channels in places like the UK, Canada or Australia. So anyone from the United States trying to tune into ABC from abroad will almost certainly encounter a problem in the form of geo-blocking restrictions.

Fortunately, there’s an easy solution in the form of a VPN. This nifty bit of software changes your IP address so that you can access all the content you normally would at home, from anywhere in the world.

However, note that some services require you to verify local credit card or cable subscription details before gaining access, so it’s always best to read the fine print first and have whatever you need to hand for your convenience.

Once installed, select the location of your home country and simply click connect to watch the Taylor Swift concert live, just like you normally would.