How Twitter and Trump’s toxic relationship came crashing down 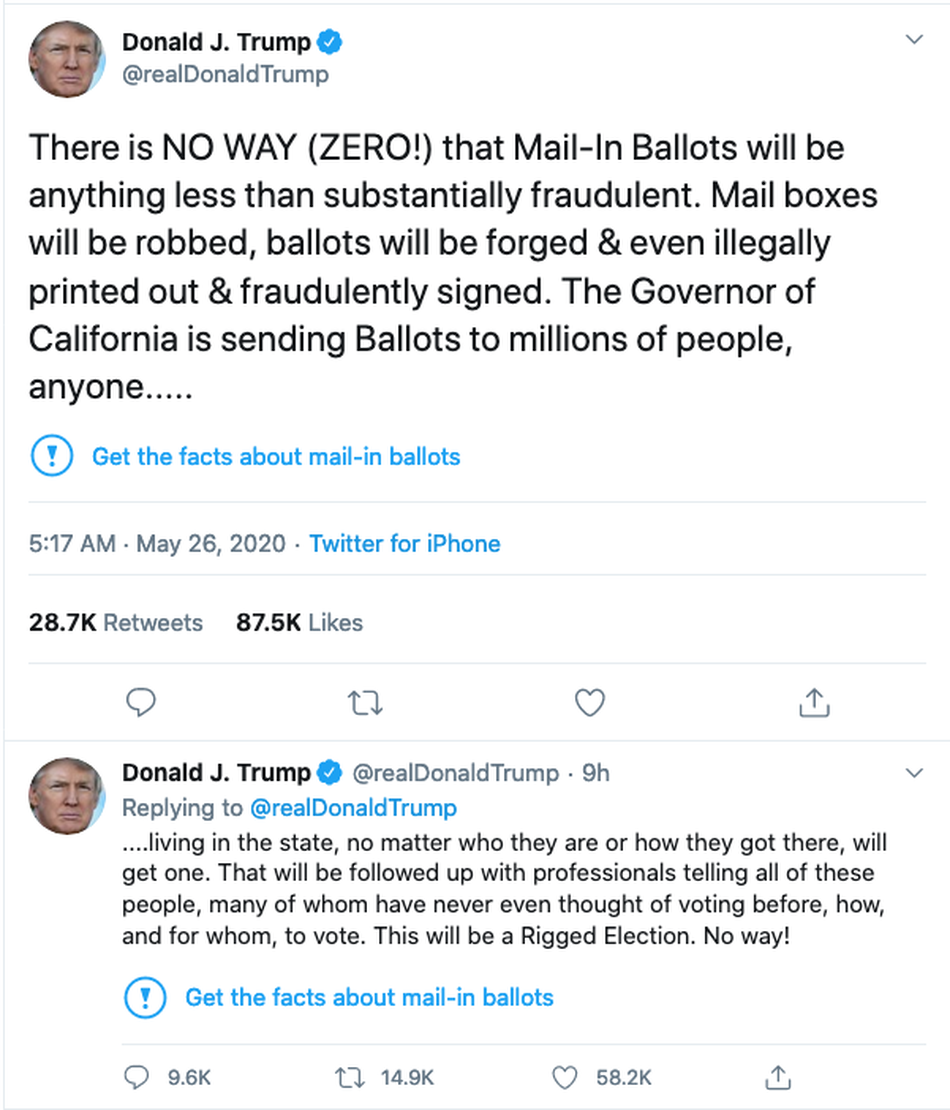 When it comes to passionate love affairs, the one between Donald Trump and Twitter lasted quite a while. But as these things often go, the years have worn heavily on the once white-hot relationship.

Kicked off in 2009 with a tweet in the third person promoting an appearance on Late Night with David Letterman, over the next 11 years Donald Trump would use his account on the social media platform co-founded by Jack Dorsey, Noah Glass, Biz Stone, and Evan Williams in 2006 to great effect. Great, in this case, referring to scale — not quality.

Then, in one week, it all fell apart. Twitter fact-checked Trump. He responded with a weak executive order that was all bark and no bite, and Twitter hid, for the first time, a Trump tweet that broke its rules about glorifying violence.

The relationship had gone from complicated to extremely so, but it had never exactly been smooth sailing for Twitter and the now president. Pushing Trump-branded wine, birtherism, and xenophobia, Trump over the years grew his account to 80.4 million followers (at the time of this writing) and acquired a uniquely powerful megaphone in the process. After all, for a brief moment, there was even a half-joking concern that Trump might start World War III with a tweet. Or, if not World War III, then perhaps another war in the Middle East.

Be sure to tune in and watch Donald Trump on Late Night with David Letterman as he presents the Top Ten List tonight!

And while Twitter executives may have, like the rest of us, been concerned about all of this, they also benefitted from Trump’s nightmarish use of their platform. Twitter, eclipsed by rival Facebook in any number of metrics ranging from revenue, to users, to reach, became undeniably relevant — as evidenced by Trump’s 2016 announcement of Mike Pence as his running mate via, you guessed it, a tweet.

Twitter also grew. In April of 2017, Twitter experienced what, at the time, was referred to by this very publication as the “Trump Twitter bump.” The company’s monthly active user count had jumped by 9 million after months of remaining flat, or even shrinking, and that growth was attributed — at least in part — to Trump’s reliance on service.

“@realDonaldTrump: I would like to extend my best wishes to all, even the haters and losers, on this special date, September 11th.”

The name “Twitter” was seared into the world’s collective mind, and the San Francisco-based company’s executives had Trump to thank.

But nothing gold can stay, no matter how gaudy it may be.

The cracks begin to show

Trump has long been a thorn in Twitter’s side. However, up until the last few years, whatever headache he brought the platform appeared to be outweighed by the prestige of having the president as its biggest booster.

Through incitements to violence against the press and the amplification of anti-muslim rhetoric, Twitter mostly stood by and let the president do his thing. And then came the coronavirus, which as you’ve heard said so many times, changed everything.

In mid-March, as the virus spread through the U.S., Twitter announced that it would “require people to remove tweets” that included: “Denial of expert guidance,” “Encouragement to use fake or ineffective treatments, preventions, and diagnostic techniques,” and “Misleading content purporting to be from experts or authorities.”

Content that increases the chance that someone contracts or transmits the virus, including:
– Denial of expert guidance
– Encouragement to use fake or ineffective treatments, preventions, and diagnostic techniques
– Misleading content purporting to be from experts or authorities

This new rule quickly left the realm of hypothetical. In late March, Trump tweeted about the drug hydroxychloroquine, writing that, in combination with another drug, it had “a real chance to be one of the biggest game changers in the history of medicine.”

HYDROXYCHLOROQUINE & AZITHROMYCIN, taken together, have a real chance to be one of the biggest game changers in the history of medicine. The FDA has moved mountains – Thank You! Hopefully they will BOTH (H works better with A, International Journal of Antimicrobial Agents)…..

We know now, of course, that using hydroxychloroquine to treat COVID-19 might actually be dangerous. Even at the time of Trump’s tweet, however, there was little-to-no hard evidence to support his claim. But that doesn’t mean people weren’t listening.

Shortly after Trump’s March 21 tweet, an Arizona couple ingested chloroquine phosphate — a chemical used to clean fish tanks — to terrible effect. The man died, and his wife was hospitalized.

To require Trump to remove the tweet, however, was clearly still a bridge too far for Twitter.

And so, Twitter took another approach. In May, the company announced that it would affix labels on tweets that contained misinformation on the coronavirus. And yes, confirmed Twitter’s Head of Site Integrity Yoel Roth, the new rules even applied to “world leaders.”

These labels will apply to anyone sharing misleading information that meets the requirements of our policy, including world leaders.

Twitter, after all these years, was finally primed to act.

And then, on May 26, Trump tweeted about mail-in ballots for the 2020 presidential election. Specifically, he falsely claimed that mail-in ballots would be “substantially fraudulent” and lead to a “rigged election.”

In response, Twitter applied a label to two Trump tweets imploring readers to “get the facts about mail-in ballots.” When clicked, it took users to a curated page explaining the various ways in which Trump’s tweets are misleading.

“These Tweets (here and here) contain potentially misleading information about voting processes and have been labeled to provide additional context around mail-in ballots,” a Twitter spokesperson told Mashable over email at the time. “This decision is in line with the approach we shared earlier this month.”

Indeed, the earlier shared “approach” is one about coronavirus-related misinformation. It seems that, once having established a framework to label misleading tweets about the virus, Twitter was more comfortable applying it to other types of misinformation.

In this case, specifically, misinformation about the election.

Trump, as was to be expected, reacted poorly. In addition to a rambling series of tweets accusing Twitter of “interfering in the 2020 Presidential Election,” he also signed an executive order apparently meant to intimidate Twitter by asking federal agencies to request that the FCC reconsider the scope of Section 230 of the Communications Decency Act.

Notably, Section 230 actually protects companies like Twitter from being held responsible for the individual writings of their users. In other words, it doesn’t really do what Trump suggests it does.

And perhaps it could have ended there — with both Twitter and Trump having made only slightly more than symbolic gestures aimed at the other.

It did not end there.

On May 28, as protests in Minneapolis following the May 25 death of George Floyd at the hands of a police officer went into the night, Trump tweeted that “Any difficulty and we will assume control but, when the looting starts, the shooting starts.”

In response, Trump tweeted a call to “REVOKE 230!”

Remember, Section 230 is not what gives Twitter the ability to slap a warning label on Trump’s tweets. As a Facebook spokesperson argued on March 28, revoking 230 would not accomplish what Trump seems to think it would.

“Repealing or limiting Section 230 will have the opposite effect,” Facebook spokeswoman Liz Bourgeois told the Washington Post. “It will restrict more speech online, not less.“

Despite, or perhaps because of, Trump and his administration’s ever-increasing attacks on both the company and at least one of its employees, Twitter appears emboldened in its effort to rein in its one-time golden goose.

The company that, for years, had been implored to suspend Trump’s Twitter account, has finally had enough. As a result, experts see a court battle in the company’s future. However, according to the ACLU, it’s one that Twitter will likely win.

In other words, as things stand right now — at least in the eyes of the ACLU — Trump has no legs to stand on. That doesn’t mean his torso isn’t dangerous, however.

“This order is a direct threat at Twitter, Facebook, and other platforms that if they engage in speech that displeases the president, he will unleash the power and resources of the federal government against them,” added Ruane. “President Trump has it backwards: The First Amendment protects us from the government, not the government from us.”

Were this anything other than Twitter, Trump might forget about the beef and move on. However, with Trump’s identity so tied into his online persona, he very well might be in this battle for the long haul — limited attention span notwithstanding.

What that means for him, Twitter, Section 230, social media in general, and all of us at this point remains unclear, but it’s guaranteed to be messy. But that, after all, is what happens when most love affairs come crashing down.