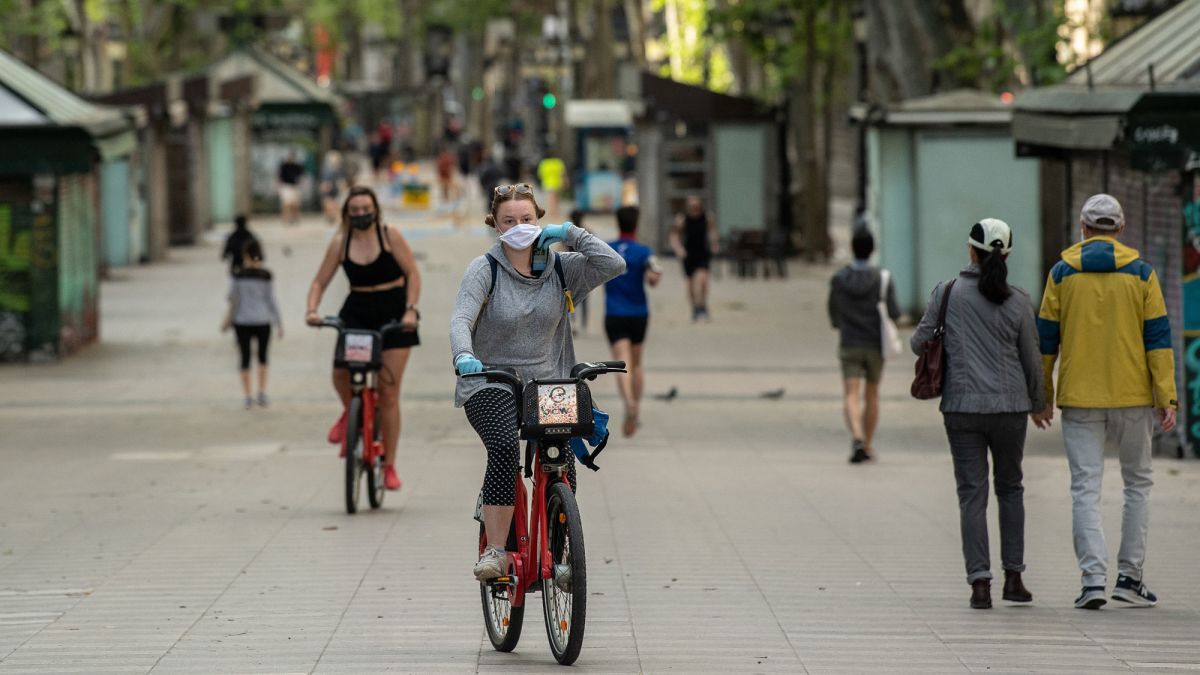 I’ve spent all week waiting for this day, the day Spain said it would relax its strict coronavirus lockdown and would let people go outside to exercise or take a walk. The government had announced that this would only happen if the situation in the country, which has the second-highest number of covid-19 cases in the world after the U.S., continued to evolve favorably. I wished for this relief with all my heart but also tried to brace myself in case it didn’t happen.

I’m originally from Texas, but have been living in Madrid, Spain’s capital city, since 2016. Unlike in the U.S., which allows individuals to go on walks and exercise, although regulations may vary by city and state, in Spain people can only go outside to carry out a limited amount of activities, such as going to the grocery store, visiting the bank, or going to work if they cannot work remotely, among others. These have been the only activities the majority of the population has been able to do for seven weeks.

Upon learning about the planned measures, my messages to friends were filled with words and phrases like “ojalá” (let’s hope so) and “a ver” (we’ll see.) After being confined for so long, it was just hard to believe that things had really gotten better. Nonetheless, I understood why we had to stay at home, and believe that the confinement measures—some of the strictest in Europe—taken have helped Spain control the spread of the virus.

But those measures have also taken a physical and mental toll. Over the past few weeks, I’ve had trouble sleeping and low energy. My legs ached from sitting down all day, and although at first I worked out with my weights almost every day at home, recently I had lost motivation in even doing that. I also had trouble concentrating and some days didn’t feel like talking to anybody. I live alone, and haven’t seen my friends in person since this all began.

As the week went by, it seemed that the world tried to grant my wish (and the wish of millions of others, no doubt.) The Spanish government announced that it would begin to de-escalate its strict lockdown measures in four phases, opening the country a bit more in each phase, after which it would enter a situation deemed the “new normal.” According to the government, the de-escalation process is meant to last until the end of June.

The measures give everyone a bit of relief while avoiding crowds and protecting seniors, who are at higher risk of developing complications from covid-19. As for what was allowed, people would only be allowed to carry out individual, no-contact activities, such as biking, running, or surfing. People would also be able to go for a walk as long as they stayed within one kilometer of their home. They would be allowed to walk with one other person they lived with.

There would be no limit on the amount of time for exercise or walks, but people would only be able to go out once a day in their assigned time slot.

With all of this information, by Friday, I finally believed that this was really happening. In one day, I was going to be able to go outside and go for a run. Although this was great news, it was also a bit concerning. I had not gone for a run in 49 days, and I wasn’t sure how my body would react to being able to move again. I mean, I didn’t think I would faint or anything, but I also did not want to end up with a nasty cramp in the middle of the street on this joyous occasion.

So what did I do? I prepared my body the best way I could. Knowing that I would have to run on concrete because the parks in Madrid were still closed, I did lumbar exercises to avoid back pain from the impact. I also did a lot of squats with my 10-pound body bag to strengthen my legs. To all who know more than me about these things, I know these might not be the best exercises, but the trainers at my gym had recommended they would help me run outside.

On Saturday, I set my alarm for 7:20 a.m. I woke up five minutes before my alarm was set to go off (which never, ever happens) and almost went back to sleep because I am not a morning person. But my sleep-riddled brain suddenly remembered that it was Saturday, and I could go outside. In one swift movement, I hauled my butt out of bed and proceeded to have breakfast, drink loads of coffee, stretch, and change.

I am slow in the mornings, which means I left my house at 8:45 a.m. This wasn’t bad since I also didn’t want to be running for two hours straight. When I stepped on the main street outside my house, I saw dozens of people in their running gear. I also saw people walking. The runners did not have masks, and I myself did not wear one to run today because I worried I wouldn’t be able to breathe well while running, although I wear one for every single other activity I do. People going on walks did wear masks.

I decided to walk to a street near my house that I knew had wide sidewalks, Calle de Serrano. Judging by the amount of people that were out, I did not want to be playing in-person Mario Kart and dodging obstacles during what was supposed to be a relaxing run. I also wanted to walk a bit so my body wouldn’t freak out when I told it to run for the first time in weeks. This turned out to be a good idea. It gave me time to breathe in the cool May air and just look around.

It seemed like the city was sleeping. Everything was closed on the street I walked on, and there were hardly any cars moving. People on walks checked out stores through the windows. The runners, meanwhile, tried to maintain social distancing guidelines, or roughly six and a half feet of distance, but it was tricky. There were a lot of people on the street, people who, like me, had gone outside as soon as it was possible for a bit of relief. Although people seemed to earnestly try to stay away from each other, sidewalks just weren’t built for corona times.

There were more people when I got to the street I was heading to. It seemed others had also thought about the space issue. However, it was a big street, so while there were lots of people, there weren’t too many problems. The issues began once I got to the Retiro Park, which was filled with runners and walkers.

Even though it was closed, it appeared that people thought they could run or walk around it, but the sidewalks there are very small. To avoid getting close to others, people started running in the street. Given that there were so many people, this didn’t help much. Again, I wanted to follow the rules and have a relaxing run, so I turned around to go back to the wide street.

The morning started cool, but the sun got stronger as it went on. I live in an interior part of my building, so I hadn’t been out in the sun for more than five or 10 minutes since the lockdown began. Experts had warned the public on Spanish television to be careful with the sun since we hadn’t gone out in so long. I had carefully put on an SPF 50 sunscreen that morning. It was my shield.

I ran for a little over two miles before I took a break to stretch and rest my legs. My back was good, and my legs, besides needing a little stretching, didn’t bother me too much. I was pleasantly surprised and grateful.

I completed three miles about 10 minutes away from my house and decided to walk back. It was almost 10 a.m., and my time slot was about to finish. I was sweating and my face was red, but my body felt better than it had in weeks. As I walked down the familiar path back home, I felt normal. This is something I would have done before the lockdown, before coronavirus forced everyone into their homes.

It took a lot of sacrifices to get to this point. The road was by no means perfect, and there were a lot of mistakes made, but we got here. And although the virus isn’t gone yet, we’ve begun to wrestle a few of the simple things it took from us, and win them back. Tomorrow, it’ll be time to run again.