In praise of taking yourself seriously on dating apps 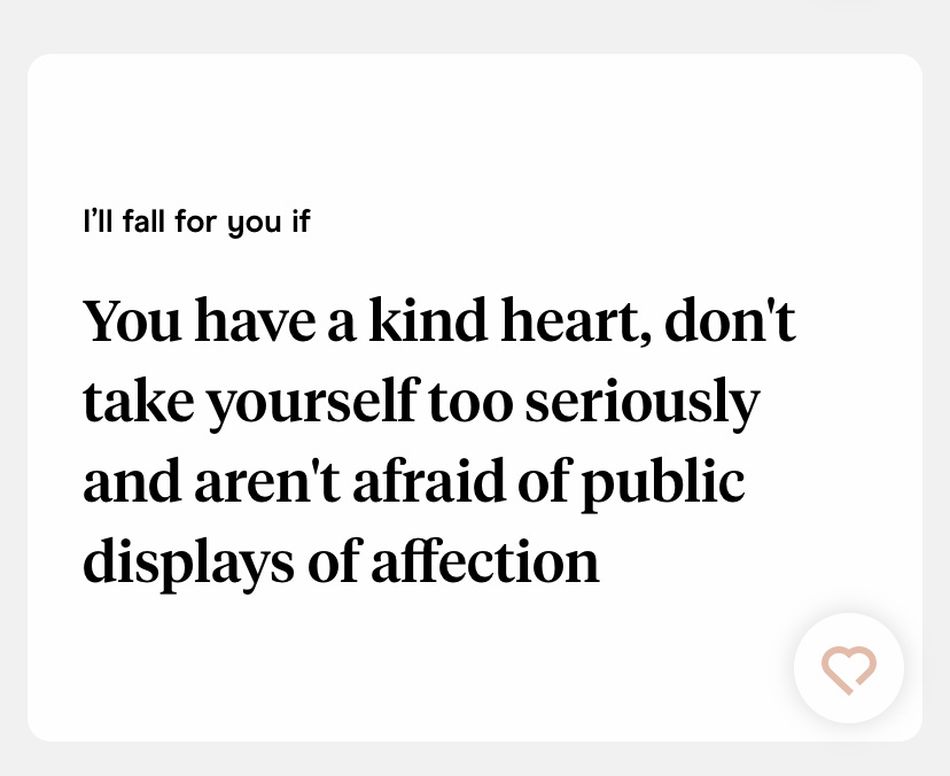 One sentence that’s guaranteed to make me swipe hard left is this: “I’m looking for someone who doesn’t take themselves too seriously.”

Sincerest apologies to anyone with this line in their dating app profile, but if you want my advice, you should probably reconsider immediately. Your intentions were of course in the right place, but to many well-seasoned daters, this highly prevalent statement is a major red flag.

To me, this line means a number of things. It reads as code speak for “I’ll make offensive jokes and say ‘ugh, chill’ when you don’t laugh.” Another possible subtext is “I won’t put labels on our relationship and I’ll call you a psycho if you ask me to.” And what’s that? I’m getting a strong whiff of “I’m emotionally unavailable.”

In my experience, no good has ever come of saying “don’t take yourself too seriously” in an in-person, real-life interaction. It’s a little like telling someone to “calm down” in an argument — one surefire way to have the exact opposite effect of the desired outcome.

But hey, that’s just my opinion. When I asked the good people of Twitter how they felt about this popular sentence on Hinge profiles, and whether they would respond to someone with it in their profile, the reaction was pretty interesting. With 569 people responding to the survey, 55.9 percent stated it’d be a hard pass if they spotted that line on someone’s profile. 24.1 percent said they’d give them a chance, and 20 percent said they wouldn’t care. Franki Cookney, sex and relationships journalist, described this line as “100 percent code for ‘I do not give a fuck about your opinion’.” As journalist Rosie Spinks put it in response to the poll: “Translation: I don’t want to deal with your emotions or anything hard because I am emotionally avoidant. I regard it as a deal breaker.”

In the replies to my tweet, some said they associate this line with people who “cancel on you 3 times in row then tell you to ‘chill out,'” while others associated it with gaslighting, offensive jokes, toxic behaviour, and a refusal to take the relationship seriously.

Online daters, if a profile states “looking for someone who doesn’t take themselves too seriously,” how would you respond?

Writing about the Seriously Phenomenon in Harpy magazine, Althaea Sandover mused about the patriarchal connotations of straight men stipulating they’re looking for women who don’t take themselves “too seriously.” “These Seriously Bros want a certain idealised woman; one who isn’t ‘stuck up’ or ‘high maintenance.’ They want a woman who doesn’t think too highly of herself to ever date guys like them,” wrote Sandover.

Straight male daters have pointed out that this line is very prevalent in women’s profiles, too, which suggests it really might be time for everyone to retire this hackneyed phrase.

“While you may be tempted…this line is overused.”

Logan Ury, director of relationship science at Hinge, knows all too well just how much use this phrase is getting. “Your Hinge profile is your opportunity to make a great first impression. You want to stand out and show people who you really are,” Ury told Mashable. “While you may be tempted to write ‘I want someone who doesn’t take themselves too seriously,’ this line is overused.”

“That means people will scroll past it. Instead, write specific, original responses that show us who you are. For example, ‘I’m looking for someone who loves puns and singing during car rides as much as I do,'” Ury added.

Aside from being overused and somewhat loaded in its meaning, this line just doesn’t make sense to me. Have you ever come away from an interaction and been like, “I like her! She doesn’t take herself seriously!” I certainly haven’t.

It’s a very admirable quality to believe in yourself, to back yourself fully and — dare I say —seriously. Nothing is sexier than someone with (justified, empirically-backed) confidence in their own ability, talent, and aspirations (not to be confused with arrogance, delusion, and baseless confidence).

Above all else, recognising your worth is honestly vital when you’re in the dating game. In order to be seriously considered as a partner by someone, you must take yourself seriously first. In a dating context, taking yourself seriously means knowing what you want and asking for it, and not settling for a nebulous, no-labels situationship if that isn’t what you’re looking for. Taking yourself seriously also translates as setting boundaries and maintaining them.

Daters, if you’re looking for someone who’ll laugh at your jokes even when they’re not funny: just come out and say it. You might actually find someone willing to do that. But if you want to be taken seriously in the 2020 dating stakes, I’d recommend ditching the aforementioned tired line.

To bastardise a famous RuPaul line: If you can’t take yourself seriously, how in the hell are you going to take somebody else seriously?

Samsung ditches the ‘beans’ for its latest earbuds, the Galaxy Buds Pro