In Search of a Long-Term Reading Project? I Present to You the Boundless World of Comic Books 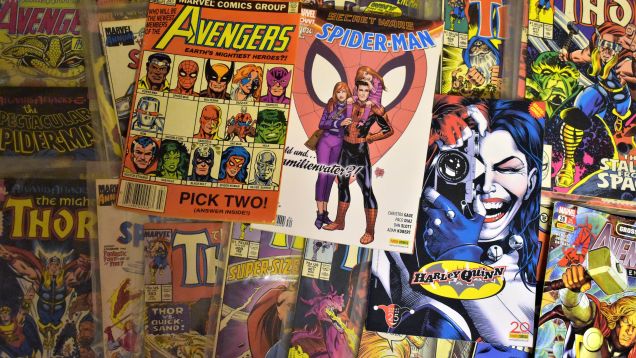 When quarantine first got underway I think we were all a bit overwhelmed by the immediate abundance of websites providing us with extensive lists of films, TV shows, books, and comics to catch up on in our new surplus of free time. I know I can’t have been the only person who suddenly found themselves with an absolutely unscalable mountain of new books to read during the social distancing era around April or so.

Here’s the thing, though: it’s been six months and those reading stacks might be a bit slimmer these days (or at least looking a little less compelling now that you’ve realized you don’t actually want to read every NYT Best Seller from 5 months ago). It’s a shame as the summer is the best time to dig into a new comic series—nothing beats laying out on a balcony, backyard, or front porch with a good issue of X-Men if you ask me. And with free time still in relative abundance, there’s never been a better time to catch up on a classic long-running comic, one that spans numerous single issues or collected editions.

Here we’ve compiled a list of some of the best longer runs of the last few years, and one classic manga that makes for a great long-term project. Any of these picks will keep boredom well at bay as the dog days of summer roll on.

One of the more acclaimed Marvel runs of recent memory wrapped up last year in stellar fashion. Master scribe Jason Aaron began writing the God of Thunder way back in 2012 with a 12-issue arc centering on the villainous Gor, the God-Butcher, an immediate classic in the grand Asgard canon. The book only got better from there, featuring multiple timelines, the sinister Dark Elf Malekith, and a wildly acclaimed stretch that sees Jane Foster wielding Mjolnir and becoming the new God of Thunder. It all culminates in the excellent crossover War of the Realms, bringing the story to a perfectly satisfying conclusion. Spanning a number of titles including Thor: God of Thunder, The Mighty Thor, and the underrated miniseries The Unworthy Thor, it’s an ambitious reading project sure to leave you hungry for more even after it ends.

Before Jason Aaron’s Thor run a writer over at Marvel’s Distinguished Competition perfected the whole “long-form story told over a number of titles” method. Comics superstar Grant Morrison, he of The Invisibles, New X-Men, and Arkham Asylum fame, took what was at the time a somewhat revelatory approach to Batman, a character whose history contains everything from pulpy sci-fi to hardboiled crime.

Rather than pick one, Morrison wrote an eight-year story that analyzed the entirety of Batman’s history, exploring the idea that everything was canon and that the gritty street-level detective of the modern era is in fact the same guy who fought aliens in Dimension Z way back in the Silver Age. Featuring sinister conspiracies centered around the mysterious Black Glove, an entire superteam of different Batmen, and the introduction of the now-beloved new Robin in Damian Wayne, it remains some of the best long-form storytelling in superhero comics and the definitive Batman opus (and you’d be hard-pressed to find a better modern Batman story than the arc Batman: RIP).

Maybe superheroes aren’t your jam. Maybe they’re too damn optimistic for you. Maybe when you read a comic you want something that, without resorting to hacky grim n’ gritty tropes, looks directly into the void and doesn’t flinch for a second. Maybe you need to read Stray Bullets. A true icon of the ‘90s underground comics scene, Stray Bullets is a crime opus featuring a diverse array of characters, from petty crooks to mob bosses to teens on the run. Slowly their stories start to intersect, but there’s no center for them to spiral towards, no epic confrontation waiting for them. They simply drift, attempting to survive the pain and glory that comes with being human as they do.

It’s masterful stuff and remains criminally (haha) underrated to this day. Stray Bullets is probably one of your favorite comic creator’s favorite comics. Maybe this is the year it finally becomes one of yours.

The late master Darwyn Cooke’s adaptations of legendary crime novelist Richard Stark’s Parker books aren’t quite as long a run as the above titles – and it’s a damn shame. Cooke managed to adapt four of the books into stunning graphic novels before his untimely passing in 2016. Today they stand as some of the finest works in modern comics, mean little monochrome tales of vengeance, heists, and the hardest criminal you’ll ever meet: Parker.

While the latter two books in the series stand well on their own, the first two (The Hunter and The Outfit) are a double-header chronicling Parker’s path of vengeance and reentry into the criminal underworld after his wife and partner leave him for dead after a job goes wrong. The series’ opus is the final installment, Slayground, a book so delightfully deranged that I dare not even spoil the plot here. The only downside is the inevitable heartbreak you’ll feel when you finish the final book and see the teaser page for the fifth installment, which Cooke was unable to finish before his passing.

While it’s not a new installment to the comics canon by any means, Takehiko Inoue’s Slam Dunk remains one of the all-time great comics. This 30+ volume manga chronicles a Japanese high school basketball team in a transitional phase as they try to get their act together and finally qualify for the national championship tournament. It’s got everything: romance, himbos, stellar drama, and at least one page per volume that will have you pumping your fist in joy.

Comics based on IP from the ‘80s and ‘90s tend to be a bit of a mixed bag. Often they read more as cash-in attempts than significant contributions to the canon or legacy of the property from which they’re adapted. Meet the exception.

Kyle Higgins’ run on Boom! Studios’ Mighty Morphin Power Rangers is stellar stuff. Not only does it read like a great superhero comic, it genuinely expands the world of Power Rangers in ways current and lapsed fans alike will find enthralling. From evil rangers from a parallel universe to more fully realized romances than the original show allowed (due to, you know, largely being made for 5-year-olds), it’s everything you could want from a modern day Power Rangers story. It all builds to the excellent Shattered Grid, a no-holds-barred crossover event for the ages that sees generations of Rangers teaming up to save the universe. You can’t do much better than this one.