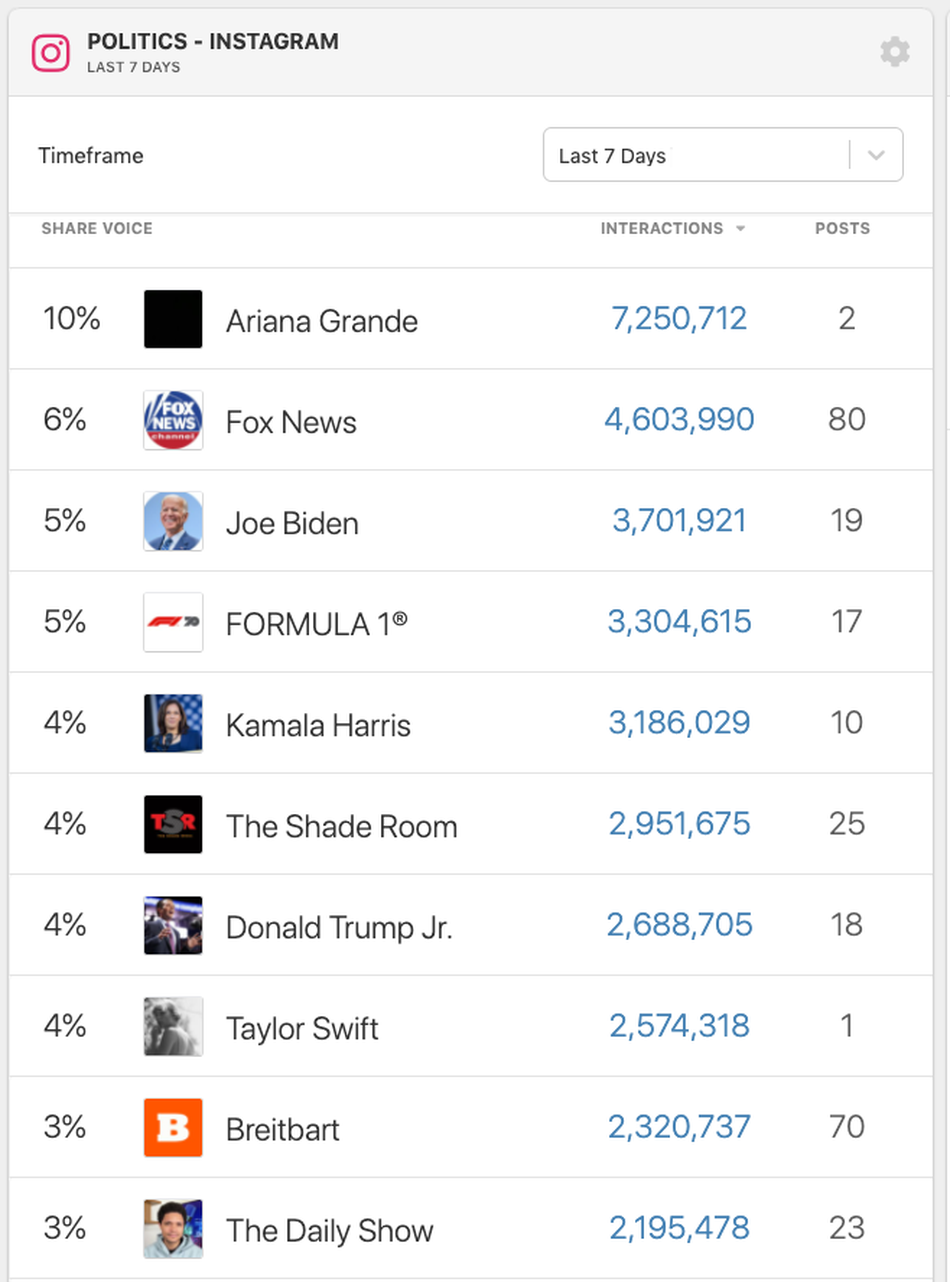 Every Tuesday in the run up to the Nov. 3, 2020 election, Mashable will break down the most viral posts about politics on Instagram. Using data from the Facebook-owned analytics service CrowdTangle, we’ll show you the topics and perspectives on Instagram that the most people are talking about and engaging with. Our hope is that this provides a look at what’s dominating the political conversation in social media spaces that you might not see otherwise.

While it’s clear that highly emotive, polarizing, and partisan content prompts Facebook users to click and comment, what makes a post “viral” on Instagram isn’t as well understood. Instagram also has a broad user base of over 37 percent of U.S. adults, with young people particularly engaged. What’s more, researchers say that Instagram may have played a bigger role in the 2016 election than Facebook for Russian operatives, and predicted that it would be central to similar efforts this fall.

This week in politics, what are people outside of your social media bubble talking about on Instagram? Here’s what you need to know.

With a grand total of two (2) posts, Ariana Grande dominated Biden, Trump, and every other account trying to talk politics on Instagram this week.

As election day ticks closer, the urgency to cast your ballot grows. That’s true whether you’re planning to vote in person or, as many are planning to do during this pandemic, vote by mail.

Led by Grande, many celebs joined the political discourse on Instagram by encouraging their followers to register to vote or vote early. Grande got 10 percent of all the likes, comments, and shares on all politics posts on Instagram. Taylor Swift’s one Instagram post, in which she shared her support for Joe Biden in the election, nabbed 4 percent.

It might have helped that one of Ariana Grande’s voting posts featured her dog Strauss, and an already iconic Kamala Harris meme from the debates Tuesday. In the other post, Grande posted a selfie and followed the meme format of reminding people to be civically engaged after saying something totally unrelated.

“Turning in these mixes and reminding u again to register to vote if u haven’t already / to vote early,” the post’s caption reads.

Voting was also a hot topic in viral (AKA “overperforming”) posts. A small voter mobilization organization called 1 Vote Closer that has just over 1,300 Instagram followers had the most overperforming politics post of the week. The post, which contained an image featuring “mistakes to avoid” for absentee ballots, got 716 times the amount of interaction the account’s posts normally do, resulting in over 29,000 likes and comments. While the post was seemingly well intentioned, some of the pieces of advice were confusing or vague; make sure that you get your official vote-by-mail information from reputable sources (like the website of your Secretary of State, or Ballotpedia for a handy absentee voting FAQ). Most importantly, read your ballot’s instructions!