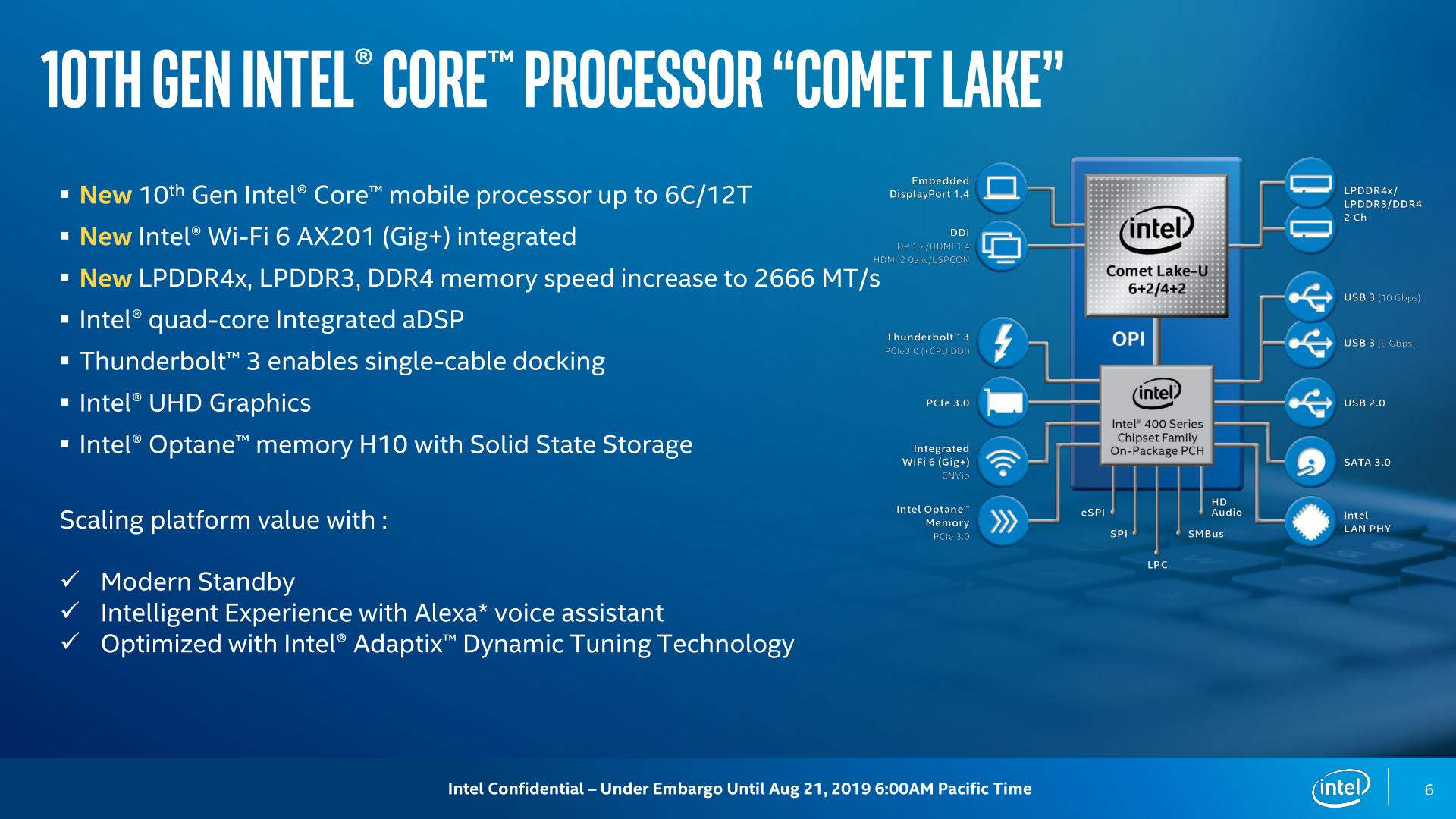 Although Intel Comet Lake already made its way into the best Ultrabooks in late 2019 with its mobile processors, this series of 10th-generation processors isn’t done. In 2020, it’s bringing the fight to AMD Ryzen 4000, with its more powerful chips making their way to gaming laptops and workstations.

There are also the Comet Lake-S processors for desktops. Officially launched earlier this year, with the Intel Core i9-10900K and the surprisingly robust for the price i5-10600K leading the charge, these are now powering the latest PCs, with Asus and MSI being the first ones to unveil Intel Comet Lake-S Z490 motherboards.

If that 10th-generation label is a bit confusing, you’re not alone. Keeping track of Intel’s releases is already confusing enough – looking at you, Cannon Lake – and this has really taken things to a new level. That’s because it was designed alongside – and released around the same time as – Intel’s Ice Lake processors for laptops. And, the two make up Intel’s 10th-generation Core lineup.

There is, however, one major difference between the two: the manufacturing process. Ice Lake is the first 10nm processor lineup Intel has put out in the mainstream, as part of Project Athena, while Comet Lake is another iteration of the 14nm Skylake architecture.

There’s a mouthful of information out there about Intel Comet Lake so we thought we’d help you make sense of it all. We’ve broken Intel Comet Lake range down for you, covering everything from rumors and speculations about future additions to the lineup to all the official news from Intel. Keep this page bookmarked, as we’ll update it with any new information that comes our way.

The Verdict Is In

Intel pushed out its 10th-generation Comet Lake processors for laptops back in August, with the actual laptops filtering out over the following months. On top of those, Intel has announced early April the full lineup of Comet Lake-H processors, which will be the high-performance chips that will be found in gaming laptops this year. That means we will be seeing those chips out in the wild in the next few months.

As for the Comet Lake-S desktop chips, Intel launched them on April 30, and they’re now available for purchase. It won’t be long until we’ll see them inside many PCs soon. In fact, the latest Alienware Aurora, R11, already has the i9-10900KF chip inside.

Now that the Comet Lake processors for laptops are out, the price tag for each chip is also finally available. We’ve listed them out for you below so you can decide whether or not to upgrade. These are Intel’s recommended price for every Comet Lake chip:

With laptop pricing, though, it’s important to keep in mind that these aren’t prices that consumers will ever see. Instead, it’s a suggested price that Intel gives to its distributors, which can charge above or below this price to laptop manufacturers. These prices will generally be worked into the overall price of the laptop, but these numbers can still give a decent idea of which segment of the laptop market each chip falls into.

As far as Intel Comet Lake-S processors, these are Intel’s recommended prices for each:

These are about on par with Coffee Lake Refresh prices below, with some differences here and there that are pretty negligible.

Comet Lake is yet another iteration of Intel’s 14nm manufacturing process. This means that there isn’t much improvement in the way of power efficiency, and thermals will probably start to ramp up. We haven’t got a chance to test each of these processors yet, but we expect the difference over 8th-generation Whiskey Lake chips to be pretty minor – aside from the Intel Core i7-10710U, of course, which boasts is a 6-core (12-thread) processor with a boost of up to 4.7GHz.

We’ve got all the specs of the Intel Comet Lake Mobile chips here:

These may look very similar to Whiskey Lake, but with some higher clock speeds. The biggest differences here, though, are the inclusion of Wi-Fi 6 compatibility and Thunderbolt 3 on the die.

As far as Comet Lake-S desktop processors go, there’s a noticeable increase in cores, threads and turbo speeds that’s reflected across the new Comet Lake-S lineup. What’s perhaps most notable is the Core i7-10700K, which still has that massive 125W TDP, but offers 8 cores and 16 threads with a 5.1GHz turbo. That’s a higher spec than the 9900K

Here are the Comet Lake-S processors specs, with a noticeable increase in TDP across the board – even the Intel Core i5-10600K has a 125W TDP – which means increased heat:

It’s the Intel Core i5-10600K that actually proved to be an impressive contender, especially next to AMD’s affordable offerings. It delivers excellent multi-core performance and an improved single-core performance, making it a great value for mid-range consumers, especially those looking to do more than just gaming.

Not that this came as a surprise. We’ve already gotten a preview of how these might compare to AMD Ryzen 3000, which shows that Intel will have to offer some competitive prices for its Comet Lake-S chips to keep up with AMD. Leaked benchmarks for the i7-10700K, i5-10600K and i5-10600KF show off their single-core performance, unsurprisingly outmatching their respective AMD rivals.