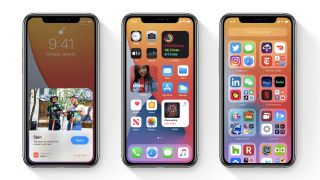 The iOS 14 release date can’t come soon enough, as Apple is introducing a host of new, long-overdue changes coming to your iPhone in 2020.

New iOS 14 features include widgets finally coming to the home screen to break up that stagnant app tile look, picture-in-picture so you can watch videos in the screen corner while doing other tasks, and digital keys to unlock your car with an iPhone.

No, Apple didn’t unveil the iPhone 12 at WWDC. But this is operating system did give us insight as to where the company is headed with the new iPhone, and it’s the software that you’ll experience when unboxing the iPhone 12 later this year.

Developers won’t have to wait, of course. They can already get the iOS 14 beta, with a public beta for consumers scheduled to launch in July. We have the iOS 14 release date details below as well as the iOS 14 compatibility list.

Apple didn’t confirm the iOS 14 release date, but if previous years are anything to go by you won’t be able to download the final software until September this year.

You can, however, download a iOS 14 beta meant for developers today (but you’ll need a paid developer account) and a public beta is set to launch in July. That will likely be the first opportunity for you to test it.

Whether you want to use the public beta on your phone will come down to whether you’re okay with experiencing potential software problems in the coming months. Public betas of software can often be temperamental, so you may want to wait until September for the final version.

Will your iPhone get iOS 14?

Want the best news about iOS 14? If your iPhone is running iOS 13, you’ll be able to upgrade to the next big software update. If your phone is the iPhone 6S (from 2015) or later, you’ll get the update.

That means the devices listed below will be able to download iOS 14 when it lands later this year:

Proper widgets are debuting on your iPhone with iOS 14. These now come in a variety of sizes, and they look like they’re far more attractive than what we’ve seen in previous versions of iOS.

Apple even referred to these more “data-rich”, and that makes sense when you see them above. The company says it has learned from the way widgets work on Apple Watch, and it wanted to bring that functionality across to iPhone.

You can pick different sizes – although those have yet to be confirmed – and widgets can now be used on your home screens, as well as in the Today view on your phone.

There’s a specific Widget Gallery where you can find these on your phone. Exactly which apps will get widgets is unclear, but we’ve seen marketing materials from Apple that include your clocks, Apple News, Weather, Calendar and many more.

A new feature called the App Library also comes at the end of your home screens within iOS 14.

This is a way of better organizing your apps, and it essentially files different services away without you manually having to do it. All your social apps, for example, would appear in one folder. One of the options shown on the WWDC live stream included all your Apple Arcade games.

This should all work automatically, and it’ll only appear at the end of your home screens.

Plus, you can now hide specific apps that you don’t want on your home screens, and they’ll appear in the App Library instead. Don’t want people to know you’ve got fast food apps on your phone? Hide them and you’ll still be able to find them in the App Library later.

Lastly, the interface of the way you receive phone calls is set to change. Instead of taking up the whole screen – a pain point for many iOS users – the notification will now appear at the top of the screen.

This means you’ll be able to answer a phone call easily, but you can also ignore it and continue using your phone as per normal. to wait for the phone call to finish without manually hanging up.

Have you ever needed an app but didn’t want to download it? App Clips is a new functionality that will land in iOS 14, which will allow you to use an app without having to download lots of hefty files.

Apple is calling these “light and fast”, and you access them via a card that pops up at the bottom of your screen. You’ll then be able to use specific features of certain apps without having to download them from the App Store.

This would be useful, for example, if you’re looking to use a electric scooter that unlocks with an app, but you don’t want to spend time downloading the service when you’re out and about.

App Clips can appear in a variety of ways. For example, they could appear after someone refers to an app within your Messages. Plus Apple is also issuing NFC tags that you may see in your day-to-day life.

Say there’s one on an electric scooter – you’d be able to tap that NFC tag, and you’d be able to immediately use the app without having to download it. This is similar to Android features we’ve seen before, but it’s the first time iPhone users will have these sort of features.

If you’re loving a particular service, you’ll then be able to download the full app directly from the App Clip without having to go to the App Store.

Siri has been redesigned for iOS 14, and now the reactions from your voice assistant won’t take up the entirety of the display; instead, they’ll appear as small notifications at the top of your phone, just as regular notifications appear.

This looks like it’ll make Siri far easier to use on your iPhone. We’ve never really understood why Siri’s functionality had to take up the entirety of your screen, and it may mean you’re more likely to use the voice assistant.

There are also a variety of upgrades going on behind the scenes, which Apple believes will make Siri a far more useful voice assistant than it has been previously.

Siri will also provide more accurate translations than before, and it can now send audio messages for the first time too.

The Messages app is getting a variety of updates, including the facility to pin conversations. Want to always have one particular person at the top of your messaging app? Now, you can.

Other improvements include 20 new hair and headwear styles for Memoji that allows you to better customize your character. There are also face coverings for those who want the 2020 look.

Groups are getting improvements too, including inline replies for specific messages as well as @mentions that allows it to work more like Slack than you ever wanted your personal messaging app to.

After a strange claim that Apple Maps is the best way to explore the world, there are a variety of new improvements that were outlined during WWDC.

That includes Guides, which are editorial content about a place. Think of it like a travel book – now you can get that information directly within the Maps app.

Cyclists rejoice! Maps is getting improvements directly for you, including the option to search for quieter roads or cycle lanes. It should tell you whether it’s a steep incline too.

These cycling features are only available for New York City, Los Angeles, San Francisco and some cities in China for now, but Apple said these will be coming to other cities around the world.

If you have an electric car, there are also now specific routes for you within Apple Maps too, and the app will tell you where charging stations are on your journey.

Another new update included better picture-in-picture functionality. It should allow you to keep watching video at the same time as using other apps. Got a message on your phone while you’re in the middle of a TV show? Now you can reply without it stopping.

Ever wanted to leave your car keys at home? Well, if you have a compatible car you’ll now be able to get digital keys that enable you to unlock and turn on your car through your iPhone.

This is specifically for the upcoming 2021 BMW 5 Series at the moment, but this is set to come to other car models in the future. Apple wasn’t able to confirm any models or manufacturers yet, but expect this to be something car companies will get excited about.

Apple has always been big on privacy, and with iOS 14 it’s taking that a step further, by requiring all apps to obtain permission from you before tracking you.

Additionally, you’ll now be able to choose to share your approximate location with apps rather than your exact location, and get more transparency on an app’s use of your phone’s microphone and camera.

iOS 14 will also give you more control over your smart home, with expanded smart home controls available in Control Center.

The Home app will also offer more automation suggestions, so you won’t have to manually control devices as much anyway.

Looking to upgrade to a new iPhone? We’ve put together all the best deals we can find in any easy-to-use comparison chart, including all the current iPhone models available.