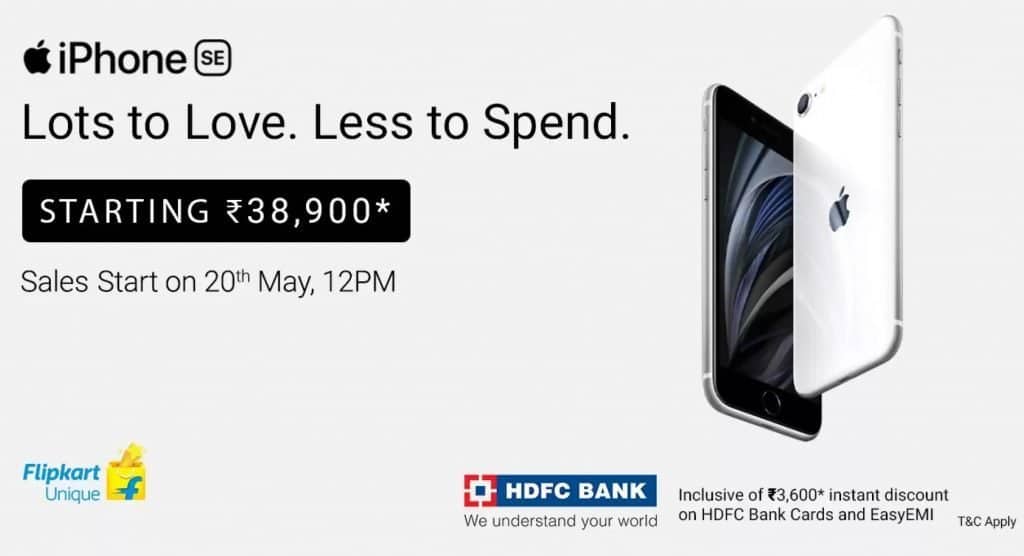 Just a day after OnePlus 8 series availability was revealed, Flipkart has announced the sale date of the iPhone SE (2020). The most affordable Apple handset will go on sale starting May 20 at 12 PM in India.

Along with the sale date, some lucrative discount offers were also revealed. HDFC Bank card owners can get a straight discount of up to Rs 3,600 on the original price effectively putting the discounted price to Rs 38,900. The landing page also has a mention of EasyEMI which means there will be some sort of EMI option as well. However, the exact details have yet to get revealed.

Apple supplier Redington also recently confirmed that the phone will be available in 3500+ retail stores across India. The HDFC card offer will also be available on retail locations, as per Redington. However, Apple has still not mentioned any release date for its iPhone SE sequel.

In terms of key features, the iPhone SE has the latest Apple A13 Bionic chip which also powers the iPhone 11. It’s also the smallest Apple smartphone at the moment coming in at 4.7-inches screen size supporting HD Retina and Haptic Touch. And it also has Touch ID, something that doesn’t exist on other iPhones. The rear 12MP camera is capable of 4K video recording and the handset has IP67 rating which means it can withstand 1-meter of water for 30 Minutes.

At Rs 38,900, the iPhone SE 2020 is an interesting proposition for the Indian audience.

Buy the iPhone SE from Flipkart