Looking for your next great binge? Head to Cameo. 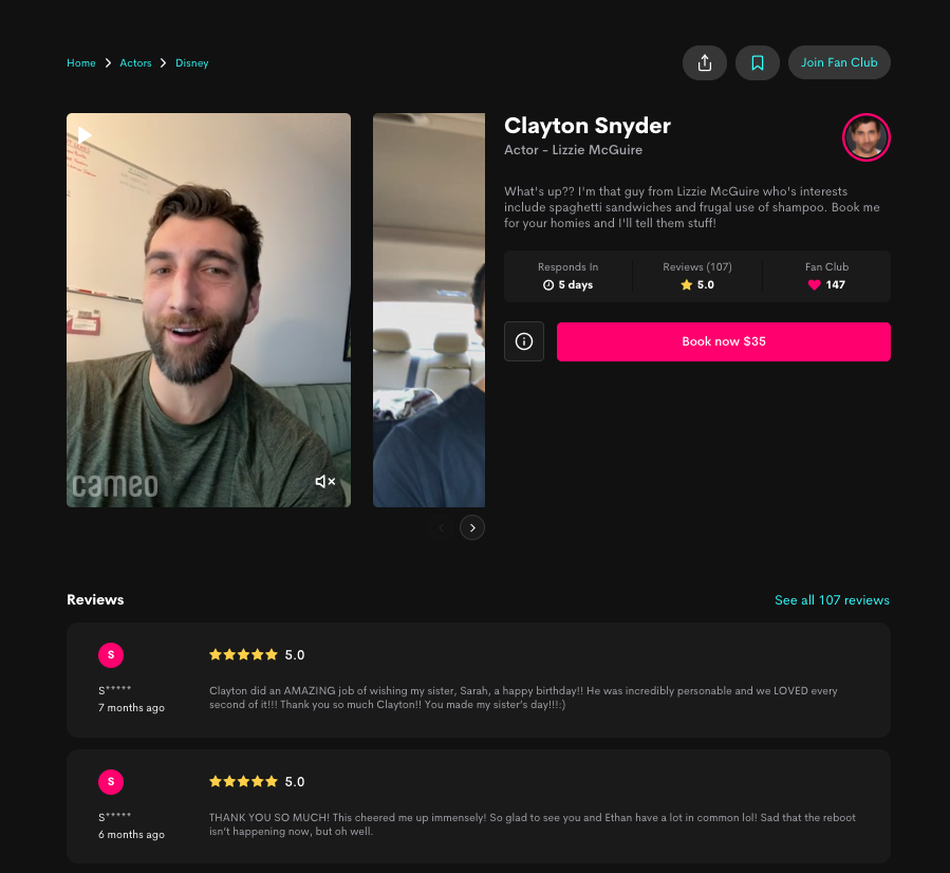 This collection of beautifully random, awkward, yet highly entertaining content can only be found on Cameo, a platform where people can pay for custom videos from celebrities.

For those unfamiliar with Cameo, the app was launched in 2017 to serve as a modern-day autograph from actors, musicians, comedians, athletes, politicians, and other noteworthy figures. The service, which was recently valued at more than $1 billion, has been used for years, but it became especially popular during the pandemic when much of Hollywood shut down and people were in search of special gifts to send loved ones in quarantine.

One might assume that Cameo videos are to solely be enjoyed by their intended recipients, but I’m here to shatter that misconception. At least once a week I head to Cameo and binge the hell out of videos that have been created for other people.

If binge-watching Cameos sounds like an impossibly ridiculous leisure activity, that’s because it is. But damn, it’s entertaining. I’ll head to Cameo to browse celeb videos if I finish a movie or series and can’t decide what to watch next, if I’m struggling to fall asleep, or if I’m just plain looking to kill some time. Before you judge, let me explain.

How I became a person who watches Cameos for fun

Something you should know about Cameo is that in addition to its ever changing regular lineup of mostly C and D-list stars, the platform occasionally welcomes big names who record videos for charity. That’s how Cameo finally got my attention.

To celebrate my first quarantine birthday in April 2020, my mom surprised me with a Cameo from *the* Connie Britton. Up until then I’d fully ignored the app, but once I saw the Friday Night Lights star (who was donating her Cameo proceeds to Feeding America) let out a cheerful “Happy Birthday Nicole” and deliver a much-needed pandemic pep talk I was hooked.

That same birthday, my coworkers gifted me a joke Cameo from Barbara Weber, mom to former Bachelor lead Peter Weber. As I toggled between videos from the woman who played Tami Taylor and Pilot Pete’s mom on my phone, I knew I had to investigate further. Connie taught me that Cameos could be wholesome, hopeful, and tear-jerking, but Barb reminded me they could make you do a spit take and double over in laughter. Curious about who else the app had to offer, I started browsing Cameo’s catalogue of stars. And once you start, it’s hard to stop.

In the year since I became someone who watches Cameos for fun I’ve learned that there’s a Cameo out there for everyone and every mood. If I’m feeling nostalgic I’ll watch videos from stars like The Nanny‘s Fran Drescher, Fresh Prince‘s Alfonso Ribeiro, Bill Daniels (Mr. Feeny from Boy Meets World), singer Jesse McCartney, or Simple Plan’s Pierre Bouvier. If I want a mini concert I’ll watch a musician like Rebecca Black and Imogen Heap sample requested songs or belt out beautiful renditions of “Happy Birthday to You.” If I’m obsessing over a TV show I’ll type it in the search bar to see who’s featured and make my way through the results.

If you’re a fan of reality TV or spend your evenings catching up on Deux Moi gossip, try binging Cameos. Not only does the service reacquaint you with long-lost washed-up celebs you didn’t even realize you were missing, but it also offers a peek into celebrities’ real lives by showing them in more personal, vulnerable settings.

The way Cameo celebrities approach the task at hand — whether it’s wishing someone a happy birthday, happy graduation, or happy anniversary of some sort — also speaks volumes. Are the videos short, sweet, and to the point? Does the celeb appear disinterested, stiff, or like they’re reading a script? Are they clearly going out of their way to make the stranger on the receiving end of the video special and give the gifter their money’s worth? You can tell a lot about a celebrity by the quality of their Cameos.

Harnessing Cameo as a source of free entertainment

I can confirm that receiving a personalized celebrity video is fun, but it always comes at a price. Watching videos that celebrities make for others, however, is free and nearly as entertaining.

Want to watch some Cameos for yourself? Just head to the platform and click on a celebrity’s account. There, you’ll see their bio, average request response time, reviews, and pricing — along with the number of people they have in their Fan Club. Joining a celebrity’s fan club is free, and it gives you access to additional content, and alerts you when there’s a price drop. But if you’re mass-browsing celebrities to watch videos for fun you probably don’t want to join a bunch of fan clubs.

Have no fear: In most cases, even without joining Fan Clubs, the account features five videos that the celebrity has recorded for others, along with their intro video to the platform, which is always a delight.

There’s something supremely entertaining about watching a celebrity take a few random facts about a stranger and try to turn them into satisfying content. And if you’re lucky, the celebrity will share facts about themselves in the process.

Did you know Tom Felton’s manager has a cat called Draco Meowlfoy or that Breaking Bad’s Dean Norris has been with his accountant for at least 30 years? I did, because binge-watching Cameos has turned me into a fountain of highly specific celebrity facts.

It’s interesting to browse and compare Cameo’s celebrity video prices, as well. See what kind of content Donald Trump Jr. is creating for $500, find out who’s charging $1 or $2,500 and decide if you agree or not, and see if you think Leslie David Baker should be the most expensive Office star on the app.

Cameo’s trove of celebrity videos is vast and just waiting to be watched. So decide who you’re in the mood to hear from, take advantage of the platform’s category and search features, and start binge-watching, baby.