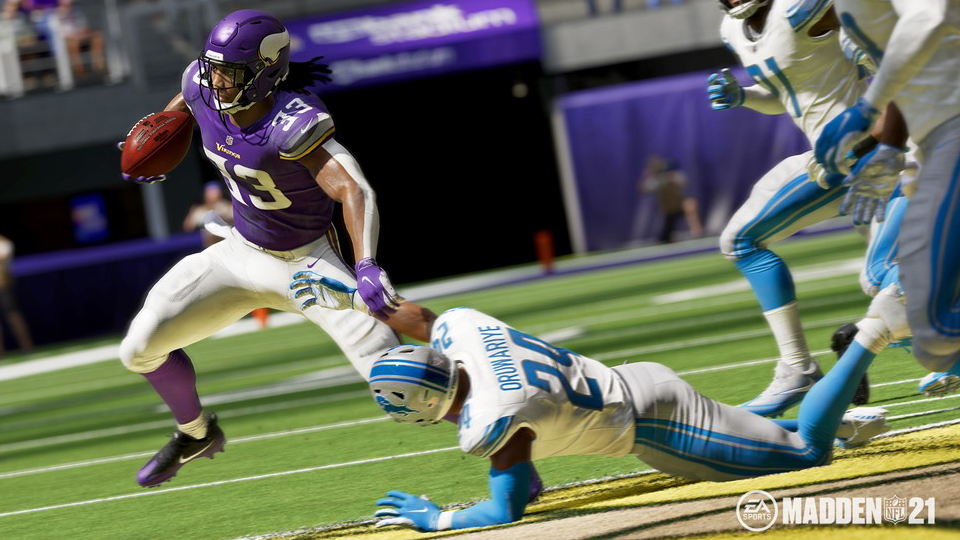 Madden 21 will be released on current-generation consoles by EA this month before appearing on PS5 and Xbox Series X later this year. The latest entry in the successful NFL franchise releases from August 25, 2020 – a full month later than Madden 20’s release last year – and will be available on PC, Xbox One and PS4 but, unlike FIFA 21, it will not be available on Nintendo Switch.

But fans of the Madden series who are keen to play the game on Xbox Series X or PS5 don’t have to hold off until the next-gen consoles are released, as Madden 21 will be offered as a free next-gen upgrade (with a few caveats, such as the Blu-ray version is not eligible).

EA has released some details of how gameplay, animation and controls will be improved from Madden 20, with the company promising Madden 21 will offer a smoother ball-carrying experience when you hit the line of scrimmage or attempt to dip or rip away from cornerbacks. And we now know that the game’s big new mode is “The Yard”, offering players some “fast-paced, small-sided gameplay”.

Whether the annual release of Madden is something you await as much as NFL Week 1, or you’re just curious about what EA Sports has planned for the series in the next-generation, you’re in the right place. Below we’ve rounded up everything we know so far about Madden 21.

Madden 21 will release for PC on August 28, making it the first Madden game to appear on Steam, following EA’s listing of the Command & Conquer, Battlefield and Dragon Age series on the Valve digital distribution service. Could we see FIFA following suit?

PS5 and Xbox Series X versions of Madden 21 have been confirmed for when the next-gen consoles are launched, but exact dates of availability won’t be known until the consoles themselves have release dates.

The good news is that EA has confirmed that it has reached Dual Entitlement partnerships with Microsoft and Sony to offer Xbox One or PS4 buyers the chance to upgrade to the next-gen versions of the game free.

The offer will be available up until the release of Madden NFL 22 but it’s important to note that if you buy the physical edition of the game then you can only upgrade your current-gen version of the game using a next-gen console with a disc-tray and you need to keep your disc – in other words, you can’t upgrade a physical version of FIFA 21 on a PS5 Digital.

It should also be noted that Ultimate Team binder content and Madden Points will transfer, while progress in certain Franchise modes can also be imported from current generation to next generation.

EA gave us a look at Madden’s all new mode, “The Yard”, in August. The trailer focuses largely on the The Yard: Underground, which is available in the Madden NFL 21 mobile app already, but it’ll be on consoles too when the game launches.

EA released a deep-dive gameplay trailer for Madden 21 in June. As the trailer states “the goal in Madden 21 is to deliver complete control to  players on both sides of the ball”. The new defensive line mechanics should make being a pass rusher “more responsive and more fun to play”. The game will see all pass moves controlled by the right stick and triggers, with two new offensive moves – side hurdle and the dead leg.

EA officially revealed Madden 21 with a trailer during its EA Play event on June 18. Check it out below:

EA has revealed Madden NFL’s new mode for mobile and console: “The Yard” and “The Yard: Underground”. This arcade-style mode offers “small-sided, high-speed gameplay” which is a nod to backyard-style football with house rules. In this mode players will be able to create their own avatar and customize them through the game with a progression system and rewards.

The Yard: Underground, already available on the Madden NFL 21 mobile app, and The Yard which will be playable on console do have some differences but they’re intended to work in tandem.

On mobile, the mode is strictly single-player with 5-on-5 play while the full console version will offer 6-on-6 and be playable solo and with online co-op and multiplayer with the CPU or real players. But when players link their EA accounts it’s possible to swap from The Yard: Underground on mobile to The Yard on Madden NFL 21 online with friends. As long as you’re logged in, you’ll be able to access a shared inventory.

After fans have expressed disappointment, EA has detailed some of the improvements it’s looking to make to Franchise mode in Madden 21 in a recent Gridiron Notes post. The changes are broken up into four main sections: the Franchise team itself, live service elements, high-level commitments and community involvement.

According to EA, the Franchise team is making some changes “including dedicating a higher percentage of team bandwidth, to deliver a greater investment in core Franchise features” through the launch of Madden 21 to Madden 22.

The live service plans were also mentioned, with “meaningful change” planned for the game through the year. The post explains that the dedicated live service team is being expanded “to allow for more focused delivery of Franchise improvements based on your feedback, while continuing to evolve the broader game for our wide cross-section of Madden fans.”

Some of the areas in Franchise mode that will be targeted in live service were elaborated on, with EA mentioning Career Stats UI, Trade Logic and Tuning of players amongst other things. There is even mention of looking ahead to Madden 22, with EA looking to improve things like coaching and staff management, scouting, scenario engine enhancements, team chemistry system and offering more content.

Gameplay changes
Madden 21 trailers suggest that “realistic open field tackling” will end some of the issues that blighted previous Madden games. For example, in Madden 20 many were left frustrated by  being tackled in unrealistic ways particularly when a running back would hit the line of scrimmage. EA also has promised further “authenticity improvements” which will hopefully iron out the glitches that saw players animated in strange ways especially when colliding or blocking in pairs.

The use of the right stick and triggers in offence will lead to more stylish combinations when running with the ball and there will be more celebrations if showboating is your thing.

Madden Curse
This year’s cover star is Baltimore Ravens quarterback Lamar Jackson. Why is that important? Being the face of Madden might not actually be a dream scenario for a player because of the so-called ‘Madden Curse’ which has seen previous cover stars struck with a loss of form or injury. It’s became such a curiosity that it was reported in 2010 that EA was even considering making a movie based on the phenomenon.

However, previous Maddens have been said to have broken the curse (Madden 20’s Patrick Mahomes won Superbowl LIV although he did get injured earlier in the season) and Jackson has said he isn’t bothered by it.

Player ratings: the 99 club
In previous Madden games there has been an elite club of ‘99’-ranked players. Patrick Mahomes, Aaron Donald, Stephon Gilmore and Christian McCaffrey are in the 99 club in Madden 21 with DeAndre Hopkins, Bobby Wagner and Khalil Mack dropping out from Madden 20. Cover-star Jackson is the third-highest ranked quarterback and said “I wish it was better. But hey, it’s better than it was last year. I guess we can roll with it till the season starts.”

The ratings have become a huge area of interest and help hype up the upcoming NFL season.

This is America
The Black Lives Matter movement has seen global sport react positively to its anti-racism message and has forced the NFL to change its stance and apologize for not backing black players who took the knee. EA has issued a statement supporting BLM and quickly moved to postpone its Madden 21 reveal after the death of George Floyd. We hope that EA doesn’t side hurdle the issue in the game (wouldn’t it be good to see all the players taking the knee before kick-off?) as previous iterations haven’t exactly led by the front on this issue.

Face of the Franchise is back
Madden 20 introduced this game mode that allowed you to control a college QB who (hopefully) made the draft into the NFL and then functioned like a superstar mode. EA has confirmed Face of the Franchise will be bigger in Madden 21 with the action starting at high school (ala Friday Night Lights) and with a chance to switch positions to running back and wide receiver at college.

X-Factor
A critically-acclaimed addition to Madden 20 saw a group of players have Superstar X-Factor abilities. The 50 sportsmen could raise their game when in ‘the zone’ and boost their team with special skills making them unique compared to their team-mates. The Superstar X-Factor abilities return for Madden 21 so there’s a whole host of new characteristics (that were leaked) including losing the ability to fumble, tight ends who consistently catch when breaking free from coverage and quarterbacks who can throw an extra 15 yards.