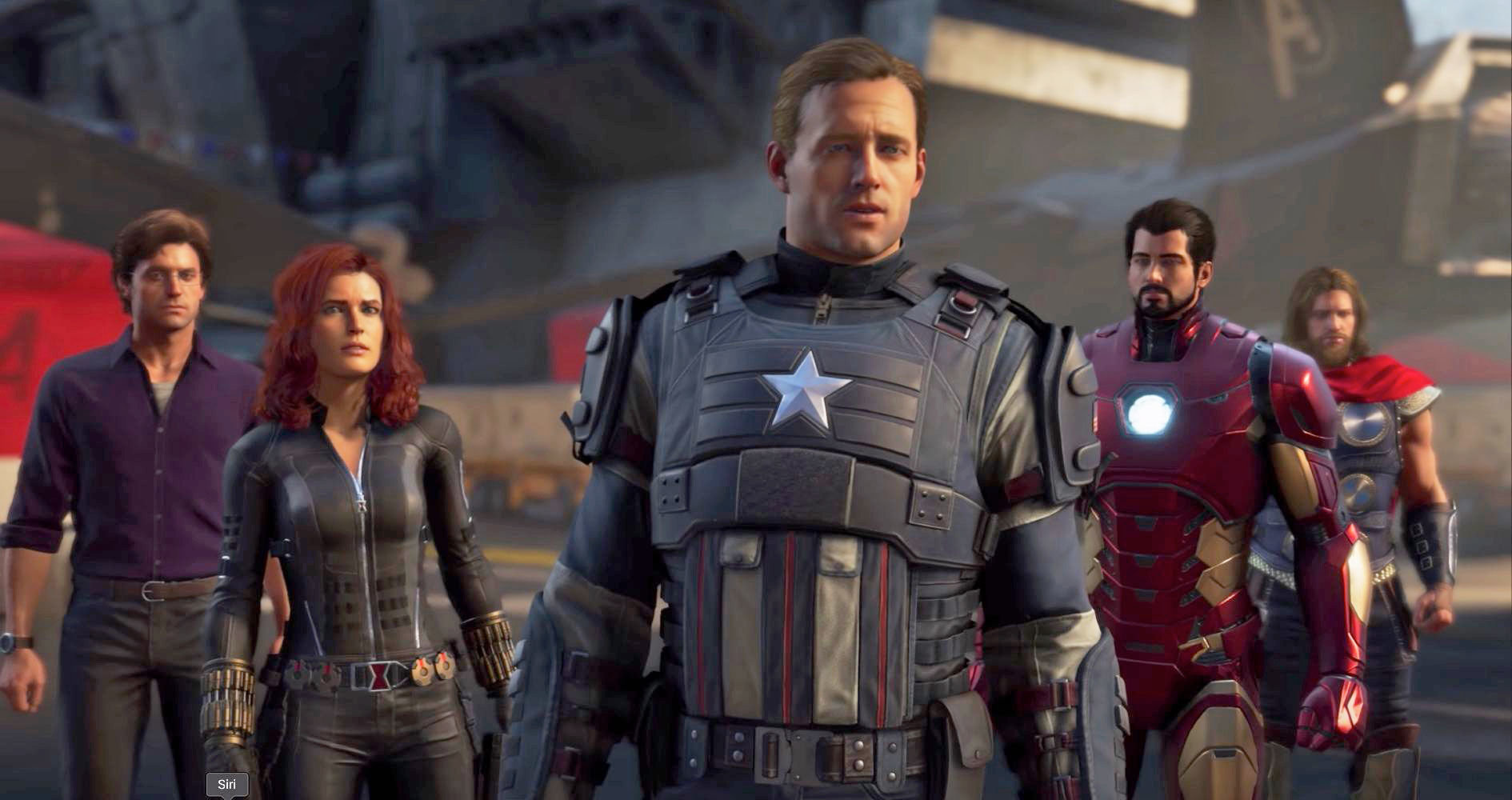 Still reeling from the end of The Avengers? Well, the  new Marvel’s Avengers game from Crystal Dynamics could potentially fill the avoid.

If you missed its debut and first set of trailers, Marvel’s Avengers project is an action-adventure that will see you playing as your favorite superheroes in an all-new story set in the Marvel universe that sees the heroes up against a longtime arch-enemy MODOK, making his first appearance in the MCU.

The game kicks off on A-Day, a celebratory event for the Avengers that starts off great, and ends horribly, tearing the team apart after one of their own is lost in battle. After years of hiding among the shadows, Earth’s Mightiest Heroes are forced reassemble in order to take on a greater evil.

Not only does the game have a sizable single-player component that has you controlling and customizing every member of the team, but there’s a bulky multiplayer component that will see you assemble into teams of four online, customize your characters and fight online together through new scenarios. Crystal Dynamics says this content will be free and will come at a constant clip.

So, with ‘an all-star cast’ that includes Laura Bailey, Nolan North and Troy Baker, some of the most preeminent voice actors in the videogame industry, could Marvel’s Avengers be the superhero game we’ve been waiting for? It’s certainly starting to look that way.

Here’s everything we know about Marvel’s Avengers so far.

[Update: Hungry for more Avengers details? Check out the first Marvel’s Avengers War Room video below for an in-depth look at the story, gameplay and customization options that will be available later this year.]

The game was initially due to release on May 15, 2020 but Crystal Dynamics has delayed the release date to “deliver the ultimate Avengers gaming experience”.

If you only have time to watch one video on Marvel’s Avengers, make it the Crystal Dynamics War Table deep dive that happened on June 24. In it, you’ll get your first look at MODOK, and tons of new gameplay footage of both the single-player and multiplayer modes.

An October 2019 trailer for Marvel’s Avengers gave us a better overview of the game and what we can expect from it in terms of story and key mechanics. Watch it below to find out more about the game’s mission types (single-player and multiplayer), its character customizations, skills and gear.

The game’s first teaser trailer came out in 2018. Check it out below:

The big unveiling for the game came at E3 2019, when Square Enix and Crystal Dynamics really let loose a lot of details and clips.

Delayed release date
Marvel’s Avengers was due to release on May 15, 2020 but has has its release date pushed back to September 4, 2020 – four months later.

“As fans ourselves, it’s an honor and a privilege to work with these legendary characters and we know what these Super Heroes mean to us and True Believers around the world. When we set out to bring you our vision for Marvel’s Avengers, we committed to delivering an original story-driven campaign, engaging co-op, and compelling content for years to come. To that end, we will spend this additional development time focusing on fine tuning and polishing the game to the high standards our fans expect and deserve.”

Ms. Marvel
Kamala Khan a.k.a. Ms. Marvel is joining Marvel’s Avengers, Square Enix and Crystal Dynamics unveiled at New York Comic-Con last year. At the event, the developer teased a slightly tweaked origin story for the character who, according to Crystal Dynamics, will be exposed to the mysterious Terrigen Mist during A-Day (the game’s opening event) and “finds herself developing extraordinary polymorphic powers, which she subsequently hides for years… As the story expands, Kamala plays an essential role in bringing the disbanded Avengers back together”.

We got hands on with Kamala at EGX 2019 and found her great fun to play. Ms. Marvel’s stretchy limbs and ability to grow in size means you can easily smack around bad guys with ease.

PS4 beta
According to the game’s official twitter page, Marvel’s Avengers will have a beta on PS4 before release. However, Crystal Dynamics hasn’t revealed when or how we can access the beta. Check out the tweet below:

Marvel’s Avengers will release simultaneously for the PlayStation 4 computer entertainment system, the Xbox One family of devices including Xbox One X, Stadia, and PC on May 15, 2020. Play the Beta first on PS4.#EmbraceYourPowers #ReassembleSeptember 10, 2019

According to Crystal Dynamics, “The PlayStation 5 experience will be seamless and dynamic, fully utilizing the ultra-high speed SSD, the PS5 DualSense advanced haptics, and immersive spatial audio. To fully customize their visual experience, PS5 will also provide players with their choice of Enhanced Graphics Mode or High Framerate mode.”

Skill trees
As you progress you will unlock skill points and trees which allow you to specify your playstyle. Skills include both classics and new moves, and are categorized under the following: primary, speciality, capability and utility.

Earn and upgrade gear
You can customize your gear to suit your playstyle. Gear has varying rarity and, as you progress, you can unlock perks for pieces of gear.

War table
Players choose either hero missions (single player campaign focusing on one hero) or war zone missions (can be played with any hero in a team of up to four people) from the war table. Hero missions will flesh out the story and allow you to unlock new heroes, while war zone missions expand the narrative.

Who is the bad guy?
Crystal Dynamics has now shared that the Avengers will mainly be battling against a corporation called ‘Advanced Idea Mechanics’ (aka AIM), who believe science will save the world. With superheroes outlawed following the A-Day incident, AIM has replaced them with AI – who also keep the supers in check.

Cosmetic microtransactions
Avengers will have a marketplace where players can buy cosmetic outfits for their heroes. While some outfits can be unlocked, other must be bought with real-life money. According to Crystal Dynamics, there are outfits spanning the history of Marvel’s comics, TV shows, films and more.

San Diego Comic-Con
San Diego Comic-Con has been and gone but not without important happenings for Marvel’s Avengers fans. In a panel for the game, hosted by creative director Shaun Escayg explained to attendees that the game would allow players to play through an original Avengers story, with customizable heroes and online multiplayer. There will be the main story campaign where you’ll play as the various Avengers, and then the online co-op which is where you’ll do your character customization. This customization will include skill trees as well as appearance changes.

Offline and solo gameplay
It’s been confirmed that Marvel’s Avengers will offer players the chance to play offline and alone, despite its focus on the online multiplayer experience. In an interview with GamesIndustryBiz, Crystal Dynamics boss, Scott Amos, said that players “can have a complete experience and have fun” even if they never go online.

No paywalls or Loot Boxes
It’s also been confirmed by Scott Amos that paywalls and Loot Boxes will not be a feature of the game. It seems that monetization will come from entirely optional cosmetic purchases. These will allow players to invest in their favorite heroes and make them look exactly as they want them to.

“The idea, from the beginning, is that we want you to be able to customize your hero; how they look, how they play, the gear they have and how they use it,” Amos said.

“Your Black Widow could be different to my Black Widow – just a little, maybe a lot – depending on what you favor and how you unlock things.”

Of course, players will also be able to earn customization items as they play as well.

Official reveal
Marvel’s Avengers was finally revealed at the Square Enix E3 2019 press conference on Monday evening, giving us our first real look at the game since it was announced back in January 2017.

A “tribute to Stan”
Crystal Dynamics has revealed that the Marvel’s Avengers game is a tribute to Stan Lee, who passed away in 2018. When we asked if Stan would be making in appearance in the game, the developer seemed coy but hinted we will be seeing the legend make a appearance.

Focus on story
Marvel’s Spider-Man blew us away in 2018 with a story full of heart, characters we cared about, and some sensational performances to boot. Square Enix and developer Crystal Dynamics have a wonderful opportunity to deliver a narrative befitting the unbelievable roster of Marvel characters they have inherited.

Thankfully, it looks like they’re doing just that with Avengers.

From what we’ve seen of Marvel’s Avengers so far, the game’s ‘main’ heroes are Thor, Hulk, Black Widow, Iron Man and Captain America (but Kamala Khan seems to be the protagonist).

Marvel’s Avengers kicks off on A-Day, a day which sees the Avengers get honored for their service to the community. However, this day of jubilation is quickly ruined when Taskmaster and his cronies attack San Francisco (where the celebration is taking place), resulting in Captain American being killed and the team dissembling. But, years later, the Avengers are forced to reassemble for the greater good – that’s where the real story begins.

Continuous content?
Crystal Dynamics emphasized the idea of a “continuous” game in an “ever-expanding world”. All this content may come first to PS4 thanks to a deal between Square Enix and Sony, but all of it will be free on every platform.  Recent games-as-a-service titles such as Destiny, Anthem, and The Division 2 aren’t exactly lauded for their top-tier narratives, so we’re hoping the reveal will confirm the experience won’t be diluted in favour of ever-lasting revenue.

“We’ve had to change how we work, how we are organised as a team, the number of people we need to do this, the number of external partners… We’ve had to go hire experts like Shaun Escayg, who is our creative director. He told stories for Uncharted and The Last of Us [at Naughty Dog], we needed him to help tell this story. Dave Fifield was a game director who worked on Halo and Call of Duty, we needed him to help us with multiplayer,” Amos said.

The five studios working on the title are Crystal Dynamics at Redwood Shores, a new studio in Bellevue called Crystal North West, Crystal Dynamics’ partners in the Netherlands, Nixxes, Eidos Montreal and even Square Enix Japan.

Five teams to bring the five Avengers to life? Sounds about right.