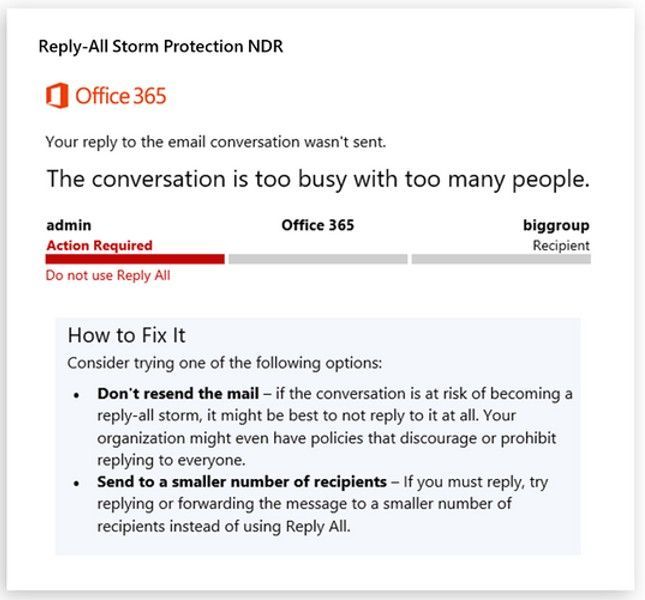 Microsoft is rolling out a new reply-all protection feature for Office 365 and Exchange Online. It’s designed to prevent email storms (reply allpocalypse), when hundreds or thousands of people start replying to an email thread after someone forgot to BCC everyone or a distribution list was misconfigured.

The new block feature will mostly benefit large organizations, and is initially being rolled out to detect 10 reply-all emails to over 5,000 recipients within 60 minutes. “Over time, as we gather usage telemetry and customer feedback, we expect to tweak, fine-tune, and enhance the Reply All Storm Protection feature to make it even more valuable to a broader range of Office 365 customers,” explains Microsoft’s Exchange transport team.

Reply-all email storms are a problem that affect businesses large and small, and have been occurring for decades. Microsoft had its own infamous incident back in 1997, which employees fondly refer to as Bedlam DL3. Around 25,000 people were on a distribution list and kept replying to the thread, generating 15,000,000 email messages and 195 gigabytes of data. The incident overwhelmed Microsoft’s own Exchange mail servers, and the company rolled out a message recipient limit in Exchange to try and tackle future problems.

Microsoft’s new reply-all email block feature will stay in place for four hours after it’s automatically triggered, enough time to stop people from asking “why am I on this email thread?” hundreds of times. The new feature appears to be working for Microsoft’s own employees. “Humans still behave like humans no matter which company they work for,” says the Exchange team. “We’re already seeing the first version of the feature successfully reduce the impact of reply-all storms within Microsoft.”

The server found an internal error or misconfiguration and is unable to complete your request. Done® kissenhülle cushion panama print rose mallow. Bcshelps.