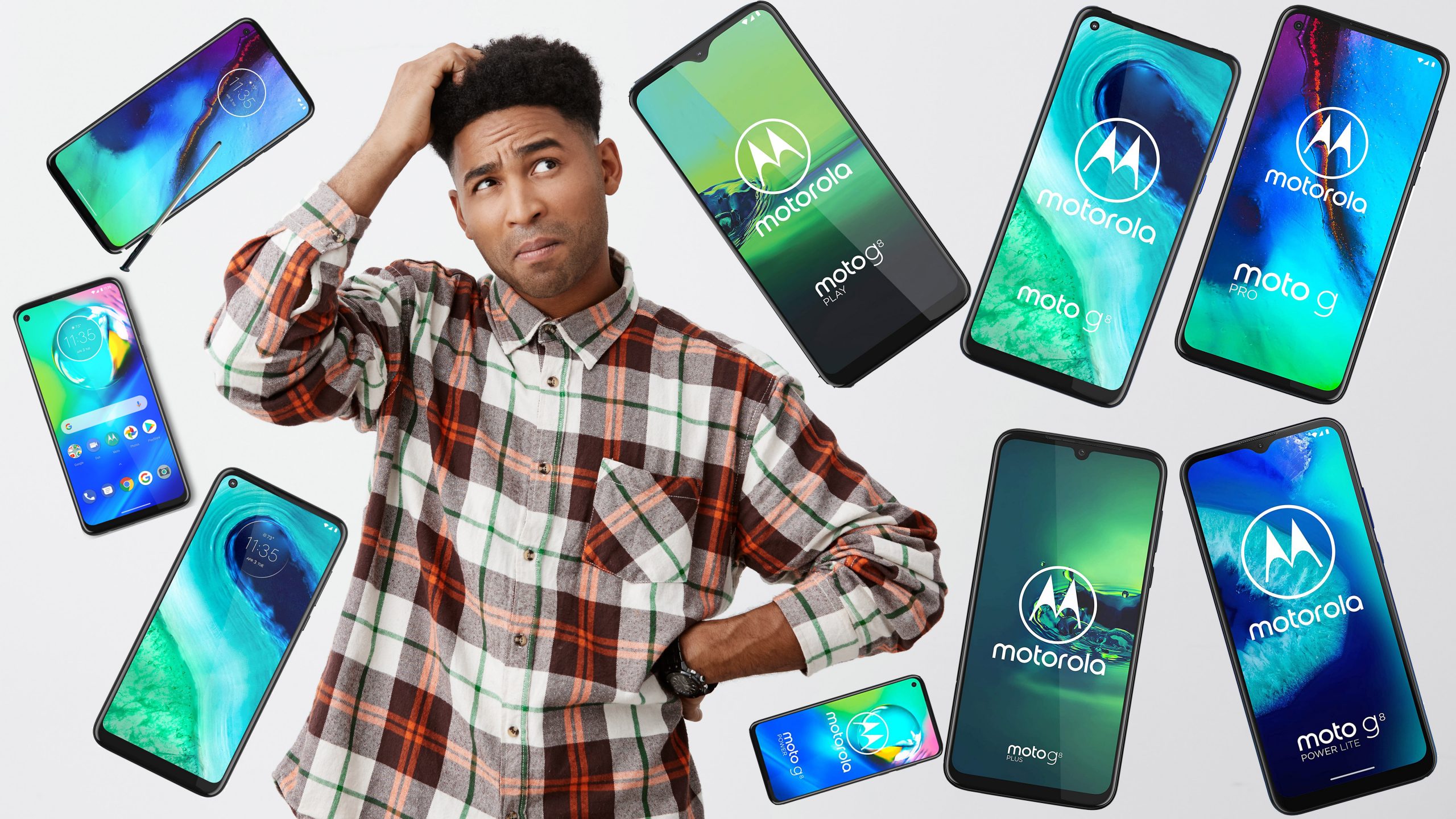 There are nine phones in the Moto G8 line – that’s a huge step up over the four of the Moto G7 contingent or the three of the Moto G6, and as a result it can be easy to confuse the phones or struggle to work out which handset is the best for you.

Well, there are nine named Moto G8 phones, but we’d argue the number is actually slightly lower. That’s because while different assortments of the handsets have been released in different countries, some of them are just the same phone re-named. However, that’s not always the case… it’s all a bit confusing really.

Jump to a Moto G8 phone

We’ve called these phones the Moto G8 devices, but bear in mind in the US Motorola is releasing them under the name ‘Moto G’. This is part of the reason of the confusion, because if you’re not well versed in phone names it can be hard to know if this is the most recent line, but thankfully elsewhere the company has stuck to ‘G8’.

To help you get your head around them, we’ve come up with this explainer guide to help you understand the phone you’ve been considering, and how it slots into the Moto G8 phone line hierarchy.

To the right we’ve compiled a list of all the different names of Moto G8 phones – click it and it’ll take you to an explainer on the phone. Generally, this list is ranked from least powerful (and cheapest) and most powerful (and priciest) so you can see how the handsets compare.

To be clear, this isn’t a list telling you which is the best overall Motorola phone, as we’ve got our best Motorola phone guide for that, which includes other lines as well like the Edge, Z and One devices. This is just a way to help you understand what Motorola is currently doing with the G line of handsets in 2020.

The lowest-end phone in the line is the Moto G8 Play, which you probably haven’t seen for sale in many places. This is because the Moto G8 Play was announced with little fanfare, and was only released in a few countries in Latin America. You can’t pick the phone up in the US, UK or Australia from carriers or Motorola’s website, although you can import it if you really want.

The Moto G8 Play has a 6.2-inch HD screen, MediaTek Helio P70M chipset paired with 2GB RAM, 32GB storage, a 4,000mAh battery, three rear cameras including a 13MP main snapper, and has an old-school microUSB port as well as a 3.5mm headphone jack.

We found the Moto G8 Play listed on Amazon US for $200 (roughly £160, AU$290), although this is for an international version which was presumably imported from another region. We’d expect it to be more affordable in regions it was released in.

The Moto G8 Power Lite is a specced-down version of the Power, which is listed further on, though the phone it has most in common with is the aforementioned G8 Play. It has a microUSB port, and a notch instead of a ‘punch-hole’ cut-out like most the rest of the devices on this list, which shows its budget roots.

The Moto G8 Power Lite launched for £150 / AU$279 (roughly $190) though at time of writing it hasn’t been released in the US yet. In Australia it’s one of only three of the Moto G8 line available, alongside the ‘base’ device and the Plus model.

This is the ‘main’ Moto G8 phone, and it’s probably the first handset in the line most would consider buying, due to the lack of suffixes. It’s also the only device in the line available in the US, UK and Australia, though in the first it was released under a different name (more on that later).

In the US, the Moto G8 is actually called the Moto G Fast, and it’s the same in every respect except it has 3GB RAM and 32GB storage – the flash module on the back is in a slightly different place too.

This phone costs $200 / £180 / $329, so it’s only a small step up from the Power Lite, and the real trade-off is that you’re getting a better processor and USB-C port in exchange for a smaller battery. If you want the best of both worlds, the next phone is best for you.

The Moto G8 Power was released as the Moto G Power in the US, although it’s exactly the same phone. When the Moto G8 series phones started being released, this naming convention indicated the whole series was just rebranded in the US, but since that some Moto G phones have been released elsewhere.

The Moto G8 Power is named for its big battery which, like the Lite, is 5,000mAh, although in the Power you’ve got a USB-C port to charge it up quicker. The phone has a 6.4-inch FHD screen, Snapdragon 665 processor with 4GB RAM and 64GB storage, and four rear cameras with a 16MP main snapper. This is the most affordable device in the line to have a telephoto lens for zoomed pictures, as while the Moto G8 and G8 Play have ultra-wide cameras, the rest just have depth sensing or macro shooters.

The Moto G8 Plus was the first phone in the series to be launched, all the way back in late 2019, and it didn’t come to as many regions as we expected given, at the time, we thought it’d be the top-end phone in the line.

The Moto G8 Plus has a 6.3-inch FHD display, Snapdragon 665 chipset with 4GB RAM and 64GB storage, a 4,000mAh battery and three rear cameras lead by a 48MP main snapper, with one of the other snappers being a 16MP ‘action cam’ video snapper pinched from the Motorola One Action.

You could pick up the Moto G8 Plus for £240 (roughly $300, AU$435), so it’s a touch pricier than the Power, but it doesn’t differentiate itself in price that much from its predecessor. The phone does have a few features we’d expect from a 2019 phone that feel a touch out of place in a 2020 phone. There’s both a physical notch and just Android 9 pre-installed, but they’re just effects of the release date.

The final phone in the Moto G8 series doesn’t hold the numerical name, but the release date suggests it’s an honorable member anyway, and that’s the Moto G Stylus. This was launched in the US in February alongside the Moto G Power, and later another version was released elsewhere called the Moto G Pro – the only difference in this model is slightly faster charging.

The highlight of the Moto G Stylus is that it has… well, a stylus, which you can use to control the phone. Other than that it has a 6.4-inch FHD display, Snapdragon 665 chipset with 4GB RAM and 128GB storage, a 4,000mAh battery and three rear cameras with a 48MP main shooter. It’s not too different from the G8 Plus, then, but the storage space and stylus may sway some.

The Moto G Stylus or G Pro costs $300 / £290 (roughly AU$500), so it’s pricier than the G8 Plus in the one region both are available, and indeed it’s the top-end device in the Moto G8 line. It’s not a pricey device by any account, but if you want a new Motorola phone and it has to be a G8 device, this is the most specced-up.