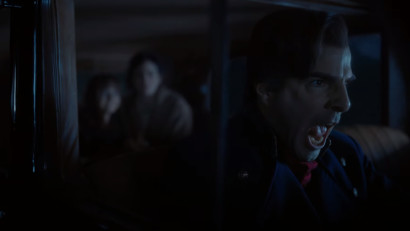 If Dracula has taught us anything, it’s that evil vampires have a really hard time staying dead. It just doesn’t stick. So, of course Charlie’s back. Call it a Christmas miracle.

Yesterday, AMC released a teaser for the second season of NOS4A2, the supernatural drama based on the Joe Hill novel that stars Zachary Quinto at his most massively unhinged as Charlie Manx, an evil vampire murderer who really, really loves Christmas. Last season, he died, but he didn’t die so good, so he’s back to his old shenanigans, taking children to Christmas Land, murdering, etc.

Whether you’re naughty or nice, you can agree this new season looks absolutely unhinged, as Minx and Vic (Ashleigh Cummings) continue their duel to the death against a wintry backdrop that seems to include swords, screaming, and a lot of vampires.

It’s not quite Christmas in July, though; the season premiere of NOS4A2 airs on June 21st.