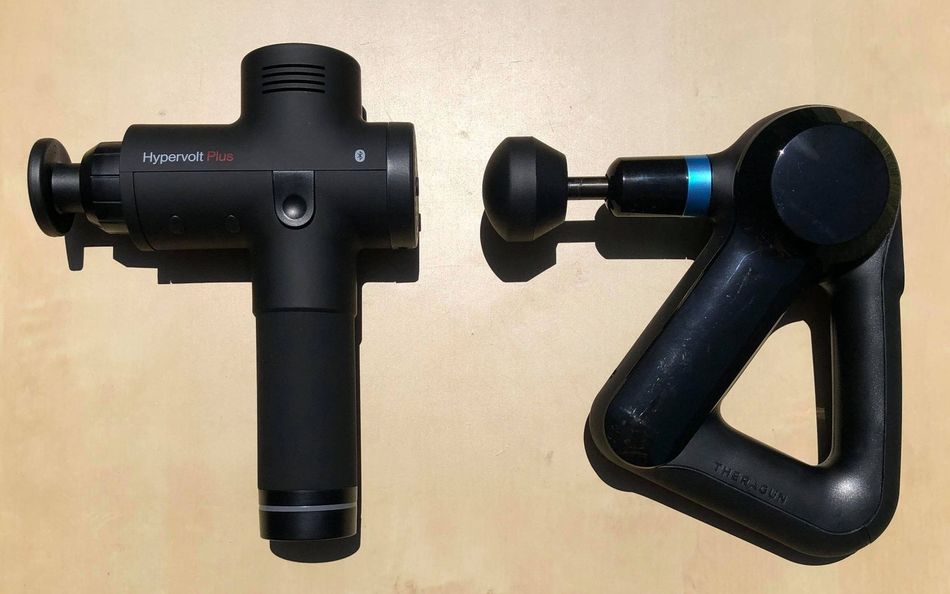 I’d been using the Theragun Elite on my mum for maybe half a minute before she started musing aloud about buying one.

“It’s bliss,” she enthused, eyes closed to enjoy the percussive force on her back.

My mum loves massages. To her, they’re the most exorbitant, coveted luxury in the world. She’s repeatedly said that if she won the lottery she’d treat herself to a massage every day, along with a personal chef and a house with water views. Unfortunately, the services of a professional masseuse are too expensive to indulge in regularly, and the coronavirus pandemic has kept her from venturing out for such purposes anyway.

As such, a handheld massage gun seems like a practical alternative, offering percussive therapy though pounding muscles with a rapidly oscillating piston. While these tools are typically marketed toward athletes, there’s no reason you can’t use them to ease shoulders stiffened by other means. They may not be as tailored to your personal needs as a trained massage therapist would be, but they’re an excellent option if you just want a quick hit to loosen those knots.

If you’re looking into massage guns, two of the first brands you’ll hear about are Therabody and Hyperice. Basically the iOS and Android of massage guns, both of these big names have been in the game for around a decade, and offer multiple devices at different price points to cater for different needs.

Mashable was sent the $399 Theragun Elite and Hypervolt Plus to put through their paces, as well as the $199 Theragun Mini and Hypervolt GO. All have a one year warranty and will help you treat stiff, sore muscles, but which one is right for you depends on your priorities.

From an immediate aesthetic perspective, the Theragun Elite has a distinct edge over the Hypervolt Plus. The Theragun’s ergonomic triangular form and slim handle are much more visually appealing than its stocky rival, whose thick trunk is double the size of the Theragun’s. In fact, the Hypervolt’s handle is so bulky that my fingers just barely reach all the way around it. I do have relatively small lady hands though, so that’s something to take into account.

The Theragun Elite is also more lightweight, weighing around 1 kilogram (2.2 pounds), while the Hypervolt Plus clocks in at 1.2 kilos (2.6 pounds). Both massage guns can be operated single-handedly, but these differences make the Theragun considerably easier to wield.

The Hypervolt does advertise 2.5 hours of battery life compared to the Theragun’s 2 hours, but it’s an insignificant distinction since you shouldn’t use a massage gun for more than a few minutes anyway.

Pure speed isn’t the best option for every situation, so both massage guns allow you to adjust the strength. The Theragun has a speed range of 1750-2400 PPM, which can be manually customised via the app, as well as five preset speeds that can be accessed using its buttons. Meanwhile, the Hypervolt only has the three preset speeds of 2400, 2800, and 3200 PPM, with no option for further adjustment.

Pure speed isn’t the best option for every situation, so both massage guns allow you to adjust the strength.

It would have been nice to have more control and customisation on the Hypervolt, but its limited speed options weren’t an issue for me at all. I prefer my massages as hard and fast as possible, so I simply set the device to its highest speed.

The Theragun can boast a slightly deeper 16mm amplitude, while the Hypervolt sits at 14mm. This is the distance the gun head travels with each pound, and is basically an indicator of how deeply into your muscles it penetrates.

However, speed has a larger influence on how they feel than the 2mm amplitude gap. The Theragun’s top speed is assertive and firm, but seems practically gentle in comparison to the Hypervolt’s most powerfully aggressive pounding. In fact, it was so strong that some of my family members found it mildly concerning. You might consider bracing yourself against a desk while someone applies it to your back.

Both massage guns are easy to use, but the Theragun Elite is more intuitive to pick up. Long press the big button on the back, and it will immediately turn on at the highest speed setting. Another long press will turn it off. Shorter press to turn it on, and use the buttons above and below to flick through preset speeds, with the PPM displayed on an LED screen. I could have done without the left and right buttons to toggle through preset treatments, though I imagine that would be more useful to athletes with set treatment plans.

In contrast, starting up the Hypervolt Plus requires you to flick an on switch located at its base before hitting the single power button to start it up. You can press the button again to cycle through the Hypervolt’s three preset speeds, with a fourth press slowing the Hypervolt to a stop so you can flick it off again. (Unlike the Theragun, the Hypervolt takes a second to wind down instead of stopping immediately.) The Hypervolt has no preset treatments, to confuse matters, but you also can’t just hand it to a friend without any instructions.

There’s an app for that

Therabody’s app beats out Hyperice’s, but it’s a minor point since you might not even install either. The Theragun and Hypervolt can easily be operated without their apps, though they do provide some extra features.

Most significantly, the apps offer guided massage routines, which tell you where to place the gun and for how long. The Hypervolt’s app illustrates its routines with demonstrative videos and comprehensive audio instructions, while the Theragun has clear illustrated diagrams and written instructions. Both massage guns can also connect to your phone via Bluetooth, and automatically change speed to follow the set routines.

Unfortunately, the Hyperice app feels more cluttered and confusing than the Therabody app, and I found it difficult to find massage routines relevant to me. (What does “Lower Pinpoint Unlock” mean and why are there two routines with this name?) It also recommended routines for Hyperice gadgets I didn’t even have.

The Therabody app also provides feedback during your massage, which the Hyperice app does not. A bar indicates whether you’re applying the “optimal” amount of pressure during massage routines, providing comforting reassurance that you aren’t doing anything drastically wrong. (The Hypervolt does have a pressure sensor on the device itself. However, the three white lights don’t tell you if the pressure is optimal, and you can’t see it if you’re using the device on your own back.)

Both the Theragun Elite and Hypervolt Plus come with five head attachments, both offering different shapes intended for different purposes. While the Theragun’s heads are slightly spongier than the Hypervolt’s hard ones, it’s their shapes that have the bigger impact. Which set is better simply depends on your personal preference.

In my mum’s case, it was the Hypervolt’s Fork that captured her attention. Intended for the paraspinal muscles on your back, the two-pronged head is now the only attachment she uses, and the reason she keeps sneaking the Hypervolt from my desk. She says it’s excellent for getting into her sore spots, and feels like a good massage from her physiotherapist.

Therabody does sell a Duo Adapter set that lets you use two heads at once, which is its closest equivalent to Hypervolt’s Fork head. Unfortunately the separately sold set costs $49, which is a pretty significant extra outlay.

I did love that the Theragun comes with a carry case though, which makes storage easy. In contrast, the separately sold Hypervolt case will set you back $49. The Hypervolt’s bulky form means it can easily be rested on its head to store, but I much prefer having the peace of mind and protection of a dedicated case.

If $399 seems a bit pricey, both Therabody and Hyperice sell smaller, portable massage guns for $200 less. Designed for travel, the Theragun Mini and Hypervolt GO (both $199) don’t give as good a pounding as their larger siblings and have fewer bells and whistles. Even so, they still provide some relief.

The Theragun Mini is the more mobile option, as its compact triangular shape makes it easy to pop in your bag. The Hypervolt GO is bulky in comparison, sharing the same chunky handle width as the full-sized Plus. It’s significantly lighter than the Plus, thus less cumbersome to handle, but still not as small as the Mini.

The smaller amplitudes are apparent in these models, which feel like they don’t go deep enough into your muscles. These more surface-level poundings are distinctly less satisfying than those offered by the Hypervolt Plus and Theragun Elite, which are able to target deeper aches. Using the Mini and GO is a bit like having someone else try to scratch your itch. It’ll do in a pinch, but it isn’t what you really want.

The Hypervolt GO and Theragun Mini are simple to use, though the GO has no visible indicator of which speed setting you’re on. Both are powered on with a long press to their single button, which is pressed again to cycle through the preset speeds, and neither have Bluetooth connectivity to their apps. You could still manually follow their massage routines, but neither app actually tells you what speed to set your device at.

The Hypervolt GO also comes with only two heads — the Bullet and the Flat. Fortunately, you can buy a set of five heads for $24.99, which will give you the Fork, Round and Cushion heads that come with the Plus. In contrast, the Theragun Mini only comes with the Standard Ball head, with its expensive attachments selling for $20 per head. That might be fine if you only use a couple of heads, but a first time massage gun user won’t know which ones best suit them, making the Hypervolt’s variety pack more practical.

I will note that the Hypervolt GO doesn’t come with a carry case, and Hyperice doesn’t sell a compatible one either. It’s a very strange decision for a device designed around portability, and definitely made me consider leaving the GO behind when I left the house.

The Theragun Mini includes a soft case, which is much more convenient and secure, but doesn’t include room for the charger. Though the Mini and GO both claim 2.5 hours of battery life, I would have liked to be able to keep the charger with my Mini to stop me from inevitably losing it.

In the end, which massage gun you go for depends on your needs.

If you were to put the Hypervolt Plus, Theragun Elite, Hypervolt GO, and Theragun Mini side by side, my mum will always reach for the Hypervolt Plus, which scores big in the most important areas. The superior PPM and Fork attachment handily make up for its smaller amplitude, and its bulky weight isn’t a big deal if you have a patient pal willing to administer it for you. But if self-application is a concern, or you prefer an assertive pound to an aggressive one, the lighter, more ergonomic Theragun Elite is the better choice.

Personally, I’d disregard the Hypervolt GO and Theragun Mini. Their $199 price tags may be alluring, but you’d be better off paying an extra $100 for the $299 Theragun Prime. If you’re going to commit to a massage gun you should at least get one that fully satisfies you. The Theragun Prime offers the same amplitude and speed as the Elite, as well as an almost identical form factor — it just doesn’t include a force meter or the Wedge attachment.

A couple of hundred bucks is admittedly a lot to pay for a gadget that isn’t technically essential. Even so, the Hypervolt Plus gave my mum her first good night’s sleep in years. That made it absolutely worth it to us.