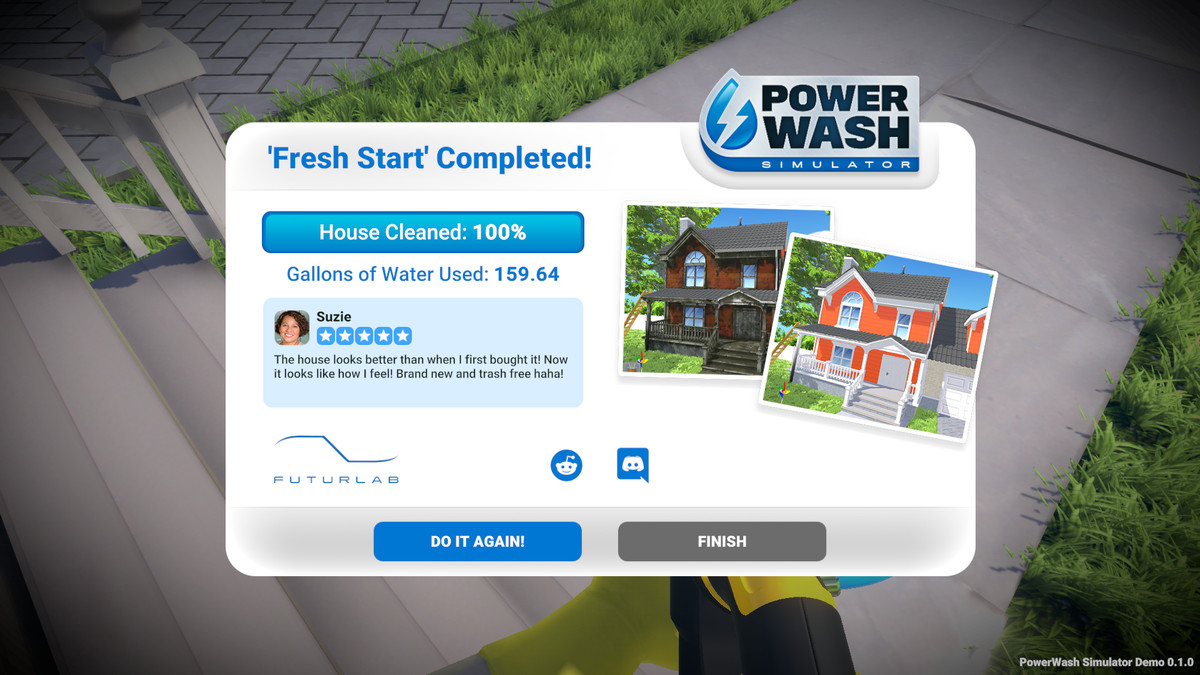 Sunday morning, I woke up feeling productive and decided to pull the hose out and give the house a good wash, cleaning the gunk and grime that littered the front porch and blasting away dirt stains that had changed the color of the roof. It was relaxing, particularly because I was not doing this hard labor myself — I was in front of my gaming PC, playing a demo of PowerWash Simulator by FuturLab.

The game has you assume the role of a professional with your own power washing business. You’ll need to clean an entire exterior of a home, from the front door to the porch. Even the garage door and its accompanying driveway need a good washing.

Attention to detail is key

There’s no winning or losing. You receive feedback from the client when the job is done, a before and after picture to show the impact of your work, and a recap on how many gallons of water you used.

Attention to detail is key. It does not focus so much on how quickly you clean, but rather how successful you are in cleaning each portion of the house. Even when a spot looks clean, you will need to keep washing until you get the on-screen notification that a particular spot on the house is cleansed. A hint feature can show you which portion of the specific area you may have missed, such as cracks on the sidewalk.

One of the challenges you’ll face is how you want to clean the house: choosing the right nozzle will determine how much surface area you cover, and some are better for certain situations. The yellow nozzle covers a large amount of dirt, the red one is ideal for removing dirt from small areas such as the balusters on porch railings, while the orange hose provides a balance between the two in terms of size. I found myself using all three of the nozzles to effectively clean every nook and cranny, but there’s replay value to be had in seeing how you tackle certain areas with different tools.

The game is slated to launch this fall on Steam via Early Access. However, due to the novel coronavirus, FuturLab decided to release an early demo on itch.io “because frankly, we thought folks could do with a relaxing stress reliever right now!” the team writes on their website.

Although the current build is just a demo that lasts one to two hours (I clocked in just over an hour on my first run), PowerWash Simulator is a palate cleanser game. The risks are not high, but games don’t always need to be; it’s a feel-good game that will surely help someone relieve some stress in these troubled times.