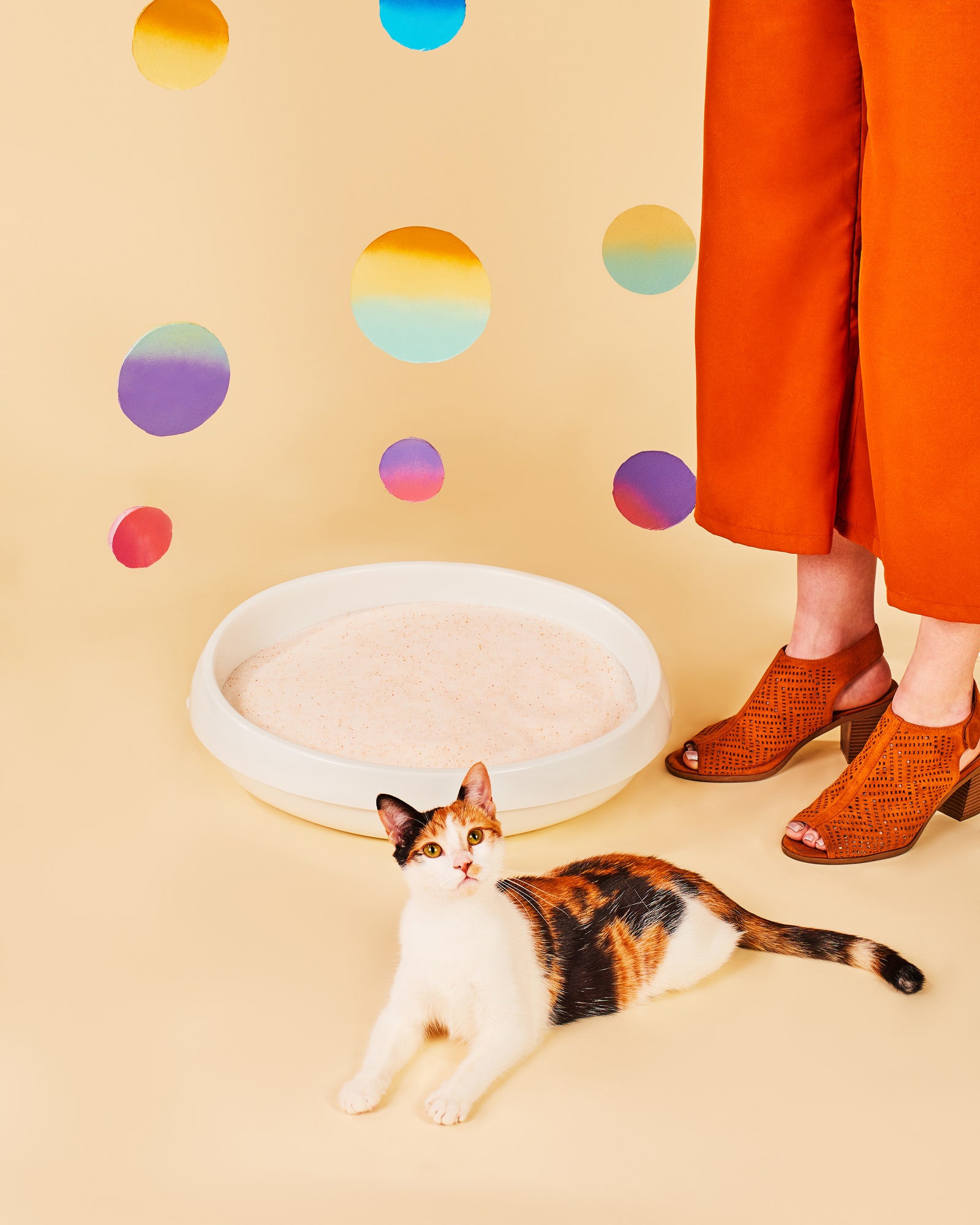 An animal’s inability to tell you when they aren’t feeling well is one of the hardest parts of pet parenthood. Even when they’re showing symptoms, you can’t just ask them what’s wrong. (Well, you can—just don’t expect an answer.) Pretty Litter is a subscription-based litter service that wants to help when it comes to cats.

A litter box is a necessary part of coexisting with a cat, and Pretty Litter claims its crystals change color when your cat might have an illness, making it easy to tell when something might be wrong. The company’s founder, Daniel Rotman, lost a beloved cat that showed no obvious signs of sickness. This litter is his solution to help monitor a cat’s health at home, to hopefully prevent what happened to him from happening to other pet owners.

I—with the help of my two cats, Huxley and Eely-Rue—put Pretty Litter’s crystals to the test for several weeks. I also spoke to veterinarians, cat behaviorists, and Pretty Litter customers to figure out whether the crystals accurately do their job. One thing I need to say before jumping into my experience is that Pretty Litter should be used only in addition to regular vet checkups. It is not a replacement for veterinary care.

Pretty Litter’s crystals change color based on the pH level of your cat’s urine. Normal pH urine will turn the crystals a yellow or olive green; a high pH, which could mean a urinary tract infection (UTI), makes the crystals turn blue; and low urinary pH turns them dark orange, and it could mean metabolic acidosis and kidney tubular acidosis, which can lead to kidney stones. Blood in the urine shows up as red, as expected, and could mean bladder inflammation, bladder stones, or a UTI.

It can be complicated to determine where on the scale the color falls, as it can look like it’s somewhere in the middle. To test for high acidity (low urinary pH), I used vinegar. It turned the crystals a yellowish-orange, which could have been the mark of low urinary pH but could also have been the yellowish color of normal urine pH. After looking through my cats’ used litter, I saw a similar color and couldn’t quite determine its place between normal and low pH. I made an appointment with my vet to have both my cats looked at, just to be safe, and the doctor said they weren’t showing any issues.

In my research, I found several Pretty Litter customers talking about false positives on Reddit. Their cats’ litter crystals turned blue, but expensive vet visits concluded there was nothing abnormal. It’s not all bad. I spoke to one customer on Twitter who regularly fosters cats and has been using Pretty Litter for around two years. She said when the color changed with a new batch of kittens, she took them to the vet and found they had worms. Another customer said the crystals turned blue, detecting a UTI that was later confirmed by a vet, who was impressed the litter caught it so early.

But there’s also the possibility of false negatives. My friend’s sister has a cat with a history of frequent UTIs, but the litter never changed color. When she called the company, a customer representative suggested buying more litter and boxes, a solution that didn’t really make sense to her. (She noted that customer service really pushed her to buy more litter when she called to cancel her subscription, too.)

It’s important to know that stress can also cause a change to a cat’s urine pH level. And any number of factors could induce stress, like if you recently moved or if you’re remodeling your kitchen, for example. Pretty Litter says you should wait 48 hours after seeing a change in color to see if it goes back to normal on its own. If it doesn’t, make an appointment with a vet. If the crystals detect blood, make an appointment immediately.

Dust in the Wind

On top of the confusing color chart, the dust levels alone are enough to make me avoid using this litter going forward. All the veterinarians I spoke to said crystal litters generally create less dust than clay litters (which is what I usually use)—and Pretty Litter claims to be low dust too—but I did not find that to be the case.

The crystals emitted clouds of dust so intense that I always waited for them to settle before I continued scooping. Other customers on Reddit also noted this. It’s not just about my discomfort, either. My cat Huxley loves to scratch at the box for what seems like hours, so he’s potentially inhaling these clouds of dust day in and day out, and that makes me nervous.

Shortly after I switched to Pretty Litter, Huxley started to get watery eyes. The vet and I both assume it’s from the dust. For what it’s worth, Eely-Rue hasn’t had this issue, but I’ve switched them both back to their clay litter to see if the problem subsides. Dust-free clay litter formulas have come a long way (I typically use Arm and Hammer litter), so it’s disappointing to see so much dust with Pretty Litter.

In my not-so-scientific survey of several cat owners, clumping clay seems to be among the most popular litter types. It’s made of highly absorbent natural bentonite clay granules that clump together when liquid is absorbed. It’s easy to scoop because everything is … clumped. Scoop it daily and change out the whole thing about once a month (or more often, if you have several cats). Plus, it’s widely available at a variety of price points.

Crystal litter is made of tiny silica gel beads that are highly absorbent but don’t clump. You scoop out feces and mix the urine in so the beads absorb the odor. Pretty Litter recommends scooping and mixing daily, and replacing the box about once a month per cat. Since you aren’t scooping away as much, you should be able to use less over time, which means less litter ends up in landfills. But it can get smelly if you aren’t diligent.

You might be thinking, as I did, Isn’t silica gel toxic? That’s a common misconception. The packs of silica gel you find in packages are labeled “Do Not Eat,” but Pretty Litter’s founder says that’s because it’s a choking hazard, not because it’s toxic. If a cat licks its paws after using Pretty Litter, the silica should safely pass through their body. It’s only a problem if ingested in large amounts, but that applies to clay litter, too.

Marci L. Koski, a feline behaviorist and training consultant, tells me she recommends Pretty Litter to her clients who have cats with a history of urinary issues. But, in general, she prefers fine-grained unscented clumping clay.

“My experience, and the problem I’ve run into with people, is they think it’s a very low-maintenance situation and they tend to forget about it,” Koski says. “It leads to a buildup of solids in the litter box. At a certain point, the crystals stop absorbing and get really smelly.”

If you want to change the type of litter you’re using, you should introduce it to your cat slowly. Vets recommend mixing old and new litter together first.

Some cats simply don’t like the way it feels to walk on crystal litter. If you find your cat’s bathroom habits are affected, don’t force them. Go back to the litter they were using before. If your cat doesn’t like Pretty Litter, or you don’t want to be held to a subscription (which starts at $22 per month), you can still be aware of your cat’s health at home.

“Usually by the time cats exhibit signs, it’s well past the time to get them to the vet,” Koski says. “You want to use a box you can scoop once or twice a day. Take note if the volume of urination has changed or if the frequency has changed. The only way you can note that is by scooping your cat’s box every day.”

Some other signs you can look out for, according to experts I spoke with, are:

I stopped using Pretty Litter due to the dust, but I still think it’s worth trying, particularly if your cat has a history of urinary tract infections. (If you have a male cat, they’re more prone to urethral blockages.) I suggest mixing it with other litter, as one customer recommended, to try and cut down on dust.

At the end of the day, there is no miracle litter. Pretty Litter could potentially help, but nothing will replace regular checkups with a vet and your own meticulous parenting.