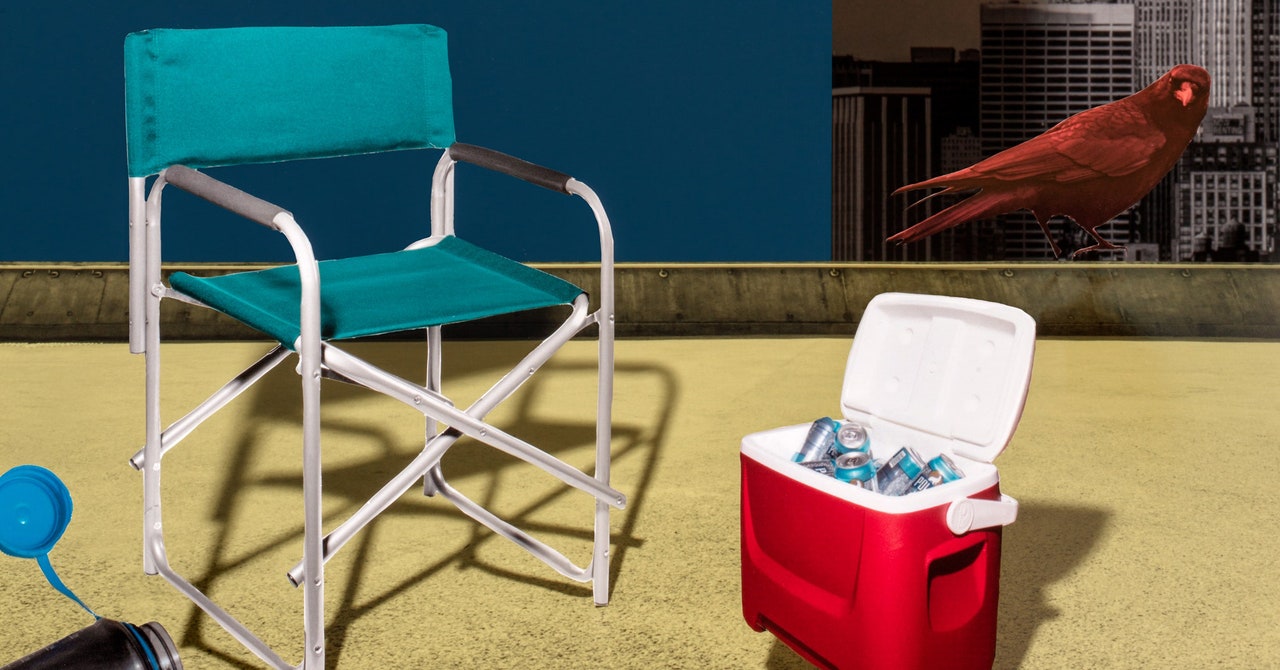 “Quick, grab the binoculars!” My husband and I stand up from our camping chairs. I put my thermos down next to our other provisions—oranges, granola, two types of sunscreen—and squint through the lenses. “Is that an eagle?”

Not quite. It’s just a robust crow, perched on a condo. It was the first beautiful weekend of the year, and we’d wanted to bask in nature, but the pandemic limited our options. We can’t be picky about wildlife encounters, as our campsite for the foreseeable future is the roof of our Brooklyn apartment building.

The building was once a three-story 1930s dairy plant with art deco flourishes, remodeled a couple of decades ago into an eight-unit residence. We feel lucky to live in a historical landmark, even with its old-building quirks, like pinging radiators and fickle water pressure. Last year it sold to a new owner with a rather laissez-faire approach to maintenance. The roof is not like the sumptuous sky decks on nearby high-rises, with professional landscaping and handsome patio furniture. Ours is bare, with a rubbery gray coating occasionally interrupted by strips of plain black bitumen. A rusty ladder leads to a rusty flagpole. Wires of unknown provenance snake haphazardly along the ledges, and I like to imagine them as the infrastructure that once powered pirate radio. But the neglect works in our favor—nobody cares about it but us. It requires only a little imagination to see it as an urban campground, not exactly off-grid, but removed enough to momentarily unplug.

We’ve built a small garden by filling a series of scavenged pots and buckets with seedlings purchased from our local plant shop. The mint is promisingly tall, and we’re bartering for some zinnias on Craigslist. Plus, the fauna isn’t limited to corvids. A family of carpenter bees swoop around the roof’s perimeter; one curious member frequently hovers near the door, eyeing anyone who comes upstairs. Bumblebees zoom around too, but they’re chiefly concerned with the gangly yellow florets sprouting from last season’s kale. Starlings and sparrows hop along tree branches in our sight line. Squirrels sometimes chitter to one another as they hug the trunks.

Another species abounds too. The people-watching during a pandemic is captivating. We survey the latest in mask fashion—bandannas are trendy, and it’s rare to see an N95 in the wild. One neighbor loves to take calls on his balcony just as much as he loathes wearing shirts. Young guys pop wheelies on motorbikes. Hasidic children race scooters while their mothers stroll and chat. At 7 each evening, people clap for frontline workers. One night the shirt-hater screamed, “I LOVE HEALTH CARE!” Not the stereotypical sounds of nature, but these outbursts of solidarity are more heartening than a babbling brook. They are the calls of a community eager to make contact. Since most of our encounters with other people are mediated through screens right now, it’s a relief to see and hear strangers out in the world.

To be sure, the roof has had, and facilitated, tough times. Like when I took my sister up there while she was visiting, and we fled after she picked up her wine glass and a cockroach dangled from its base like a wine charm from hell. Or the time a rat died and its corpse melted into the asphalt, turning everyone’s stomachs for weeks. The roof lacks natural shade, and stepping through its door on a sunny afternoon can feel like walking into a giant kiln. There’s no water, and no firepits to be found.

Then again, we don’t have to worry about bears or storms or digging a hole to serve as a toilet. And we’re still carrying out many satisfying rituals: Hiking up the stairs isn’t the same as ascending a mountain, but my calves burn on days when we lug up water jugs for the plants. We’re picnicking and lounging and stargazing. Disconnected from Wi-Fi, we ignore our phones in favor of one another. So what if we have to make s’mores down on the kitchen stovetop? We are privileged to have any outdoor space at all, let alone a slice of sky with a view of Manhattan. Maybe someday I’ll pitch a tent in British Columbia or rent a hut in southern Thailand again. For now, though, I’m finding this improvised approximation of camping to be suited to the moment. Instead of taking me outside of the city, it provides an ideal vantage point to appreciate the neighborhood’s splendor, both natural and human.

If you buy something using links in our stories, we may earn a commission. Learn more.

This article appears in the July/August issue. Subscribe now.