Relive every episode of ‘The Office’ — only recreated in Slack 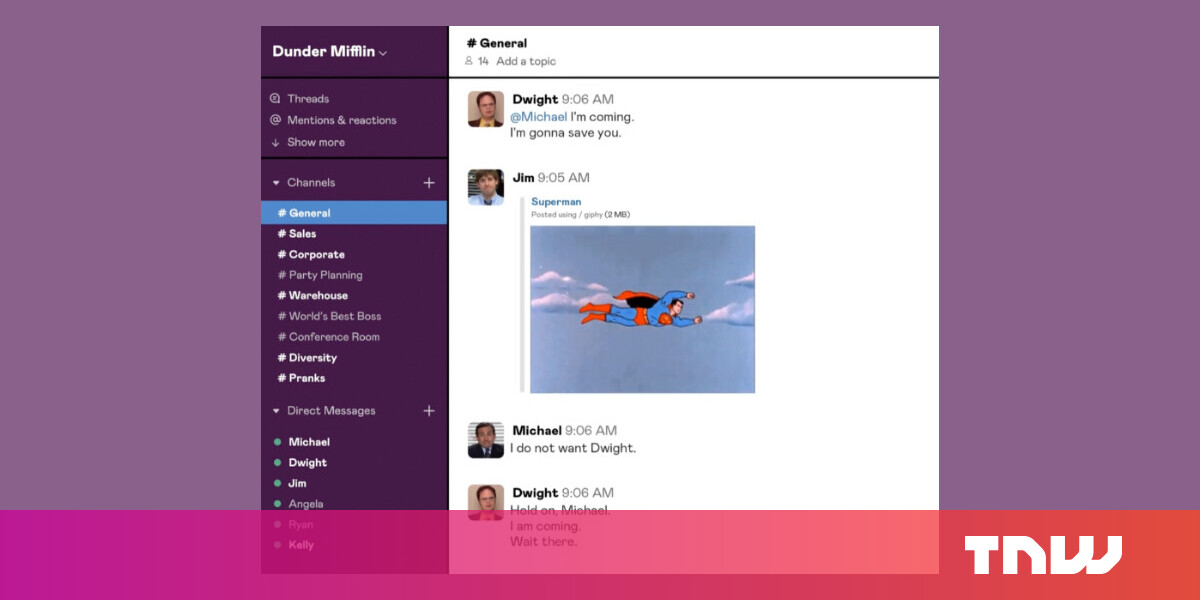 Can you imagine what it would’ve been if Dunder Mifflin had Slack? If Michael Scott was to fake-fire you in a public channel? If Jim was to impersonate Dwight by stealing his profile pic and handle? If this maggot Toby was to passive-aggressively warn you about PDA over DM?

It truly is one of the world’s greatest what-ifs. And we’re finally getting an answer to it.

Starting today, you can plug into the the The Office universe like you never have before — directly in Slack. Yes, one of the most iconic comedy series of this century is being recreated and adapted in the popular teamwork software, and it’s the most internet thing I’ve seen in a while.

In case you were wondering: no, it’s not an official remake from NBC, but more of a fan-fiction recreation. That doesn’t make it any less fun, though.

You can join the Slack channel by clicking here.

There are a few rules, though. You can only engage in conversation in the #water_cooler and #smoke_break channels. The show channels are strictly off limits. “But I’ve always wanted to be a part of The Office,” you might think to yourself.

Don’t be an Andy, nobody likes a tryhard.

The Slack remake of The Office is the work of creative agency MSCHF, which is the brain behind this Chrome extension that hides Netflix in a conference call, the “pirate radio” that streamed your favorite TV shows, and this infinite feed of AI-generated feet. It’s also the agency that bought a $30,000 Damien Hirst spot print, cut it up, and sold it $450 a pop.

“Simply, we are recreating and adapting all 201 episodes of The Office in Slack,” MSCHF’s Daniel Greenberg told me. “This is a live experience by real people. The nature of work and office culture has changed so much since the show aired (a lot of which is centered around the way we use technologies now, and that shaped the way we relate to our coworkers) so this is really cool.”

That said, entertainment is hardly the only reason for the remake — MSCHF just likes to stick it to the man. “Also, it’s always fun to use Slack in a way it’s not intended for after getting shut down by them in the past for ‘policy violations,’” referring to the time Slack shut down the popular Word of The Day game-channel that MSCHF hosted on Slack.

As far as the legality of this adaptation goes, Greenberg keeps it vague. “I mean who knows,” he tells me. “We do this for the internet as a whole.” Quite frankly, that’s good enough for me; hopefully it is for NBC, too.

MSCHF says “episodes” will run every day from 9AM to 5PM EST time for the next two weeks or so. Make sure to tune in here. I know I will. Catch you in #smoke_break maybe? #water_cooler is where the losers go, just so you know.

Read next: China’s CEOs are making millions by selling their products on livestreams